Welcome back to Kidd in a Sweet Shop! In this episode, I meet with Martin Cushway; the owner of a very special 1963 Mercedes 300SL. This particular example has got an astonishing 380,000 miles, and with that mileage, you can be sure the stories that go with it are incredible. Let’s find out as Martin takes us on a tour of the car!

What I want to know is if there is someone who has a six-decade-owned family super sportscar, as a certain Englishman does. Martin Cushway is the inheritor of a legend-status-worthy Mercedes Benz 300 SL. Born in Stuttgart, in 1963, on January 16, the hero of this story probably has the most remarkable survivor story of the iconic car.

The 17th from the last ever 300 SL to be produced, this car – this very car – was bought factory-brand-new by Ron Cushway and his wife. They both flew from England to Germany to purchase the automobile on a chilly January day. The car’s documentation – a masterpiece of automotive paperwork– stores the photographic proof of that exact moment, with the Cushways coming down the airplane.

Mr. and Mrs. Cushway enjoyed the Mercedes in every possible way for the rest of their lives. The car – with numbers matching from soft top to broken gearbox – is in stellar shape. At this point, it would be best to mention that Martin Cushway – the son of the original owners – runs a car shop dedicated to 300 SLs.

Speaking of Martin, he has had a special connection with this car his whole life. And that is the most literal statement possible – his father rushed Martin’s mother to the hospital and brought her back five days later, with a newborn Martin in her arms. Fast forward three years, and we see the road-trip-loving Cushway family jump in their family car and drive from England to Portugal.

By “family,” we mean all three– father, mother, and little Martin. By “family car,” we mean the 300 SL, now promoted to this status. I know you might wonder, “where do you fit two grown-ups and one three-year-old in a tiny sportscar”? Well, Martin is bluntly sincere about that aspect of his early childhood.

The 300 SL has a small compartment behind the seats (check the gallery to see exactly how small). Perfect for a three-year-old-sized passenger. Not so perfect for a non-stop 27-hour-long drive from England, across the Channel, down through France and Spain, and finally Portugal. Or wherever the Cushway family set their bearings. (Author’s disclaimer – this “2022-felony-parenting” was reasonable in the sixties, but please use a vehicle that can correctly accommodate all occupants).

The bespoke suitcases – tailored by an Englishman to fit the car’s trunk and be comfortable to carry simultaneously–were nowhere near large enough for a child’s vacation wardrobe. But Martin’s father was ingenuous and quickly devised a convenient solution. His son’s garment would fill in two duffel bags, which would go in the empty side wings space behind the headlamps.

So, the car went everywhere in Europe (The Cushway workshop is clad with rally plaques, all run by this beautiful Mercedes). Naturally, its three-liter straight-six received three complete rebuilds along the 380,000 miles it covered (over 611,000 kilometers). As Mr. Cushway puts it, “no one messed with it,” apart from himself and his father. 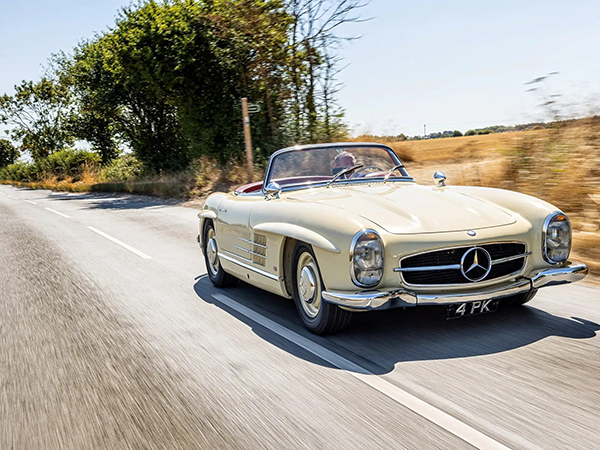 The video – courtesy of the Kidd in a Sweet Shop YouTube Channel – shows a very interesting particularity of this fantastic Mercedes. A reverse-lock brass flick on the center console. After pulverizing the gearbox with an accidental reverse shift, the new gearbox received a precautionary fail-safe prevention system. Also, to improve the car’s safety, the original owner installed an ABS on it – an actual Mercedes Benz design, of course.

The old, broken gearbox is well kept and will accompany this Mercedes to its next owner. The supercar is offered by RM Sotheby’s, with an estimated price ranging between $1,700,000 – $2,300,000. But putting a price tag is by no means as simple as valuing a six-decade-family-owned supercar. At least not one with nine documents folders to stand by its history.

The papers are so minute that even the mandatory factory gate exit pass is available – a small leaflet allowing everyone inside the Mercedes Benz car plant to leave the facility. In true Germanic organizational spirit, the small paper captures the moment the Benz rolled out on the streets. January 16, 1963, at 09:03 AM.

At that exact moment in time, the car – according to the official specs – would hit 62 mph (100 kph) in 8 seconds. Pretty good for a rear-wheel drive, naturally aspirated inline-six engine roadster with a curb weight of 2,930 lb. (1,329 kg).

The engine produced 215 bhp (218 PS) and 202 lb-ft (275 Nm), which went to the four-speed manual. Various final drive ratios, engine tuning, and racing engine parts would allow the car to hit anywhere from 135 mph (217 kph) to 160 mph (260 kph). Hence the name “Widow Maker” for the vehicle that spawned the supercar fashion, even though all-wheel disc brakes and coil-suspension all-around gave the 300SL an outstanding road behavior (for early sixties standards).

Repainted once – in 1979 – and retrimmed once more, the body is irreproachable. And the same is valid for the Mercedes power plant. Maintained with clockwork scrupulosity, the SL – used as a daily driver by both martin and his father – does not give the faintest hint of its age and road life.

The Cushway Mercedes Benz 300SL is one spectacular car with a great history. It doesn’t come easy for a man to part ways with his life-long car (and Martin Cushway is entitled to call it that), but the roadster will most probably pass on to another SL enthusiast. Whoever buys this machine is going to ride a piece of automotive history.

His current owner – Mr. Cushway – can be seen in one photo (at the 18:30 mark of the video) together with a famous couple of Germans. One would be Rudolf Uhlenhaut – the man behind the 300SL project. The other one is one of the only two 300 SLR prototypes ever built – The “Blue.” The other car of the pair – “The Red,” currently holds the record for the most expensive car on the planet.