Mercedes 300 SL Roadster from the Gene Ponder collection is up for sale at an auction organised by Sotheby’s auction house on 22-24 September.

The model offered at Sotheby’s auction is part of the Gene Ponder collection, which includes 120 cars, motorcycles and boats in the East Texas town of Marshall. His collection also includes, among other cars, a 1956 Porsche 350 A 1600 Speedster, a 1967 Ferrari 330 GTC and a 1960 Maserati 3500 GT Spyder plus mascots, classic signage, juke boxes and fuel pumps.

The Mercedes 300 SL Roadster offered at auction was delivered on 25 March 1960 to the Orbis Trading Company, the Mercedes importer in Addis Ababa, Ethiopia. Although it was delivered to Ethiopia, the car has USA specification with Dunlop tyres, Becker Mexico radio, 3.89 ratio axle, instrument cluster with speedometer in miles, sealed beam headlamps and white fabric roof plus hardtop which was available as an option from September 1958. The car was painted white and had red leather upholstery. 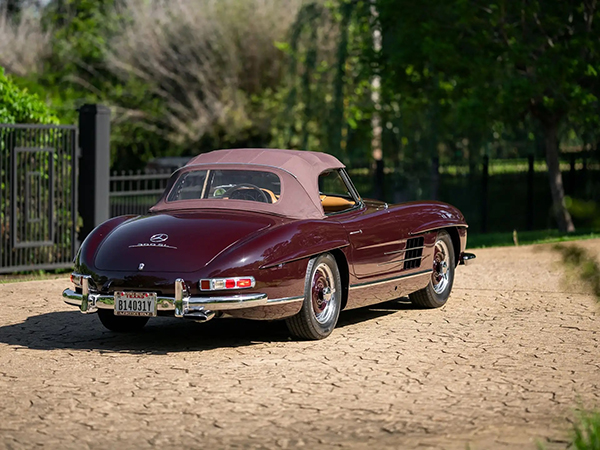 The history of the car in Ethiopia is not known but it is assumed that it was shortly exported to the USA. In 1988 it was purchased by vintage car racer Roy Walzer who took it for a complete restoration to noted specialist Paul Russell and Company in Essex, Massachusetts. But here it was spotted by one of Russell’s clients, Ervin “Bud” Lyon, who convinced Roy to sell it to him.

Later, the car was sold to 300 SL collector Bill Kling of California and in August 2018, it became part of the collection of Gene Ponder who had owned several Mercedes 300 SL Coupe models over the years. 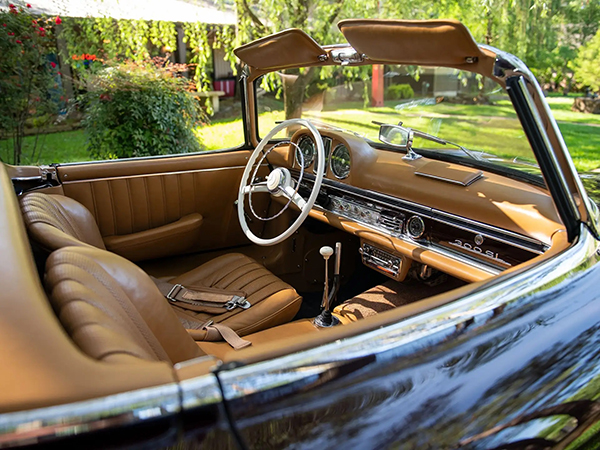 Ponder participated with this roadster in several Gullwing Group meetings as well as the Copperstate 1000 race. Ponder said he likes both models but the Roadster is “a lot cooler in Texas. You can’t beat the Germans for engineering. I did the 300 SL Rally last year in this car without one flaw”.

The car was serviced to the car’s specifications and no less than $14,000 was spent to keep it in perfect rally-ready condition.

The car is delivered with the same Cognac leather bags, spare wheel, original tool kit
the estimated selling price is between 1,7 and 1,9 million USD being justified by the exceptional condition of the car.