RENNtech is proud to announce the completion of the 1992 Mercedes-Benz 600 SEL S76R. Powered by a 615 hp, 7.6 -liter M120 V12 engine, the S76R is the most powerful naturally aspirated V12 built by RENNtech and the largest displacement on record for the Mercedes Benz M120.

Renntech is among the top names in modifying Mercedes-Benz products. When the company claims to build the perfect 1992 600 SEL, it’s worth paying attention. The result is the S76R, and the sedan has the most powerful naturally aspirated V12 ever to come from the company.

Renntech starts with the Mercedes M120 6.0-liter V12. It bores and strokes the powerplant to a massive 7.6-liter displacement. The new internals include titanium connecting rods and AMG cams. There are ported heads, beehive valve springs, and titanium retainers. Thirty-pound fuel injectors feed the gasoline.

The engine breathes through Renntech’s own design for the airboxes. The exhaust gases go through equal-length stainless steel headers to sport catalytic converters and quad mufflers. Polished stainless steel exhaust tips poke out of the back.

As a 1992 600 SEL, this sedan would usually come with a four-speed automatic. Renntech replaces this with an upgraded five-speed auto from a 1996 model. Plus, the tuner adds an OS Giken limited-slip differential. 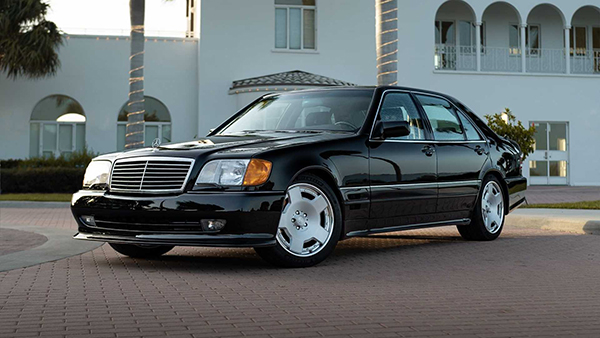 Beyond the engine overhaul, Renntech gives this S-Class restomod carbon-ceramic disks that measure 15.83 inches (402 millimeters) in front with six-piston calipers and 14.17 inches (360 millimeters) with four-piston stoppers at the back.

The tuned 600 SEL looks nearly stock on the outside. Renntech adds its own front splitter, trunk lip spoiler, and louvered side moldings. There’s also an AMG ground effects kit. The sedan rides on one-off forged aluminum wheels that are 19 x 9 inches in front and 19 x 10.5 inches at the back. The company fits Michelin Pilot Sport 4 S tires.

Renntech keeps the interior looking original but adds some modern upgrades. There are new seats, and diamond-stitched embroidery covers them. Much of the trim is carbon fiber, and the headliner is Alcantara. The company replaces the original bench seat with two, individually adjustable chairs. The stereo is now smartphone compatible.

Renntech built the S76R as a one-off, but you can also think of it as a proof of concept. The company is taking commissions for more. The company’s announcement doesn’t include pricing details. This seems like one of those cases where if you have to ask, you can’t afford it.