Does anyone buy a Mercedes just for its engine? Only in few cases, says Markus Schafer, chief operating officer of Mercedes-Benz Cars. People primarily buy the Mercedes-Benz S-Class for the luxury it offers. It is though not an opulent luxury, but a functional one. As for example, the new head-up display with augmented reality (3,558.10 euros). 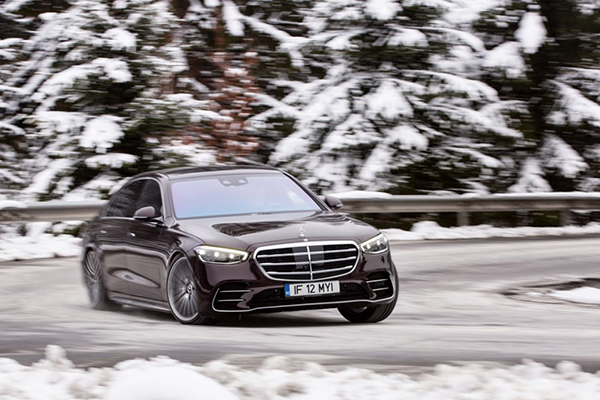 In navigation mode, blue arrows are projected on the asphalt with the direction to follow. They are located exactly where you are going to turn next. It is extremely useful, especially when you are in a complicated intersection that connects several roads. Is is so because the arrows show up as if on the road at about 6-7 meters in front of you. They show you exactly the path you need to follow. In addition, the head-up display has a larger area, the equivalent of a 77-inch diagonal. All information displayed is extremely visible.

Test drive Mercedes-Benz S 500 4Matic – The new MBUX system is extremely intuitive
The second thing that catches your eye is the 12.8-inch portrait OLED screen of the second-generation MBUX system. It fits perfectly in the center console. Furthermore, it doesn’t look like a laptop screen, bought aftermarket and later mounted, as in the Tesla Model S. 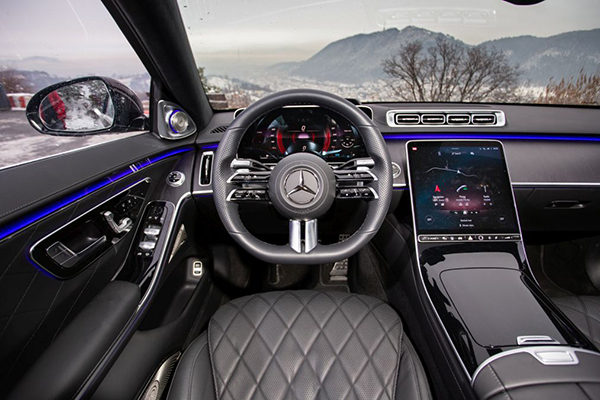 It is true that the diagonal is slightly smaller than that of the Tesla display. The ergonomics are not as radical as the Model S either. But instead, the controls are so well organized that I never got the feeling that some physical controls vanished just for the sake of current trends.

Only the lack of the volume knob, that one with + and – now replaces, closer to the passenger than to the driver, is bothering. The screen is tilted at an optimal angle to the vertical. It is very easy to access. Besides, regardless of the menu accessed, the air conditioning controls are always displayed at the bottom of the screen.

There is no controller, but no annoying touchpad from other Mercedes models either and everything is operated from the screen. Of course, there is still voice control, that the driver can activate by pressing a button on the new AMG steering wheel with two double arms or by the phrase “Hey Mercedes”. The system can now understand two successive phrases like “It’s too hot and please call Carla”. 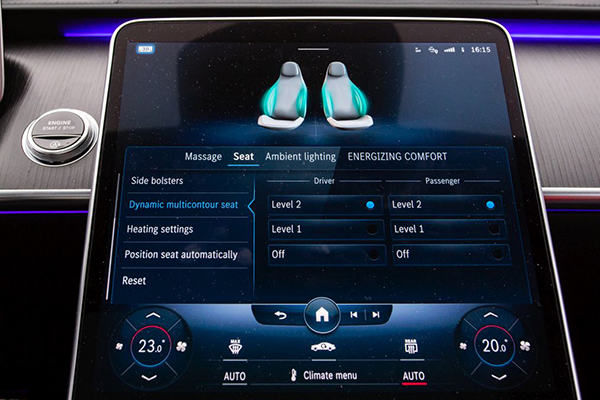 Gesture control has also evolved and is now smarter. Thus, if you order the MBUX Interior Assistant system (642,60 euros), the car understands several gestures you make. If you move your hand up or down under the center rearview mirror, the reading light turns on or off. Or if you reach up in front of the rearview mirror and move it back twice, the ceiling blind and the panoramic sunroof open one by one.

Test drive Mercedes S 500 4Matic: Interactive ambient light
The third novelty is the ambient light with 64 shades. It is now 10 times stronger than in the past. Furthermore, in broad daylight, you can see it as intense as in the nighttime.

In addition, ambient light is now interactive. The light strip that crosses the dashboard from one end to the other not only spectacularly illuminates the dashboard. It also emits a red impulse on the left side if an obstacle appears in the left blind spot. And the same red impulse triggers if, when you stop, you want to open the door and a cyclist approaches from behind. In short, the ambient lighting connects to assistance systems. 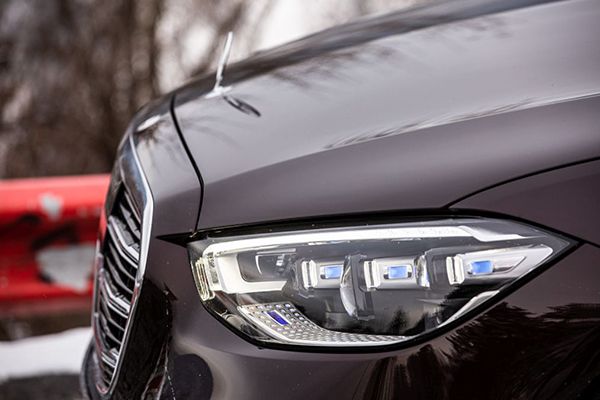 Also completely new are the optional Digital Light headlights (2,249.10 euros), while the Multibeam LED headlights are standard. This revolutionary headlamp technology allows new functions, e.g. the projection of guide lines or warning symbols onto the road ahead. DIGITAL LIGHT has a light module with three extremely powerful LEDs in each headlamp. 1.3 million micro-mirrors refract and direct their light. The resolution is therefore more than 2.6 million pixels per vehicle.

Test drive version: two Executive seats with First Class console
We had the long version for the test drive, a customers’ favorite. As for the rear, there are several options for configuring the seats. You can choose a 3-seat layout or a First Class bench with two seats and a Business center console combined with two types of seats: Comfort (backrest inclination between 19 and 37 degrees) or Executive (inclination backrest between 19 and 43.5 degrees). The test car had the most luxurious configuration: two-seat bench and Business center console with Executive seats. 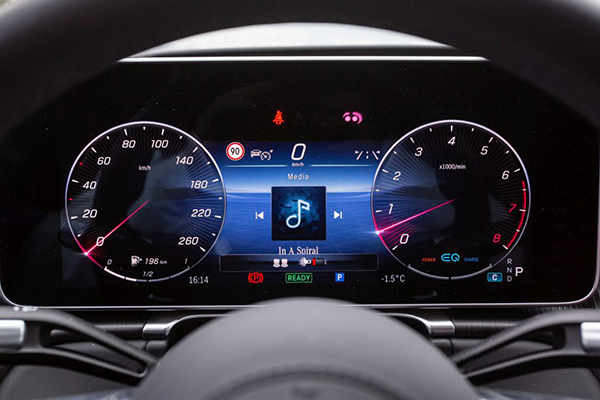 What do Executive seats with an angle of inclination between 19 and 43.5 degrees mean? It means that they can almost turn into a bed, with leg support. And with the Chauffeur package (1154.30 euros), the right front passenger seat can move forward. There is also a footrest under it.

In the rear, you can order all the facilities for the seats as well as in the front. For example, the Energizing Comfort package, heating (inclusive for the headrest), massage, ventilation but also the MBUX High End rear system (3558,10 euros). The latter allows passengers to control the infotainment system from rear. Executive seats feature an anti-submarine airbag, so that the rear occupants do not slip under the seat if they lie down in case of a crash. Optionally, as it was on the test drive car, there was also an airbag integrated in the seat belt (702,10 euros).

And of course, in the S-Class, safety is not optional, all assistance systems are standard. 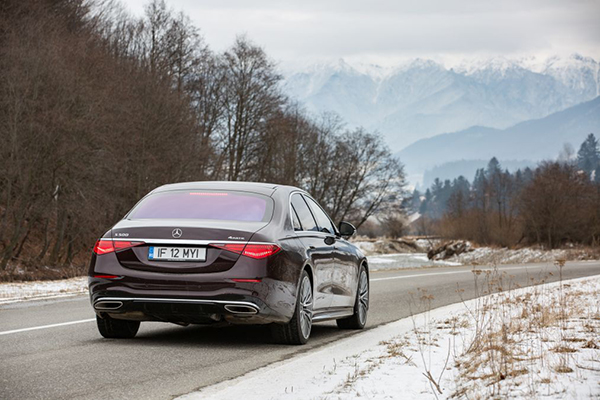 If there is anything to criticize, it is the new retractable door handles. Not for their price of 1,428 euros, but for the fact that they are rigid to operate.

Instead, the Burmester High End 4D Surround audio system is worth every penny. Even if it costs a small fortune: 7.913,50 euros. It has a bass speaker in the backrest of the rear seats and the sound can be optimized for each person in the car, depending on the seat they occupy. And the clarity of the sound is sensational.

Test drive Mercedes-Benz S 500 4Matic – Softer suspension in the Comfort mode, integral steering is a must
And now, let’s hit the road! There are no suspension options as the S 500 4Matic comes standard with adaptive air suspension. The driving modes are identical to those of the previous generation – Eco, Comfort, Sport, Sport + and Individual – but now on Comfort the suspension is slightly even softer than before.

The Maybach version will also feature an even softer Maybach mode that will probably offer a similar level of comfort as the Rolls-Royce. At the same time, the suspension is extremely quiet and, thanks to the adaptive shock absorbers, you don’t even realize that it actually works.

Unfortunately, the configuration of the test car with the optional 21-inch wheels (2,499 euros) is inappropriate. That is because it affects the comfort when crossing short bumps. Certainly, the S 500 4Matic offers a much better compromise with standard 19-inch wheels. Instead, on long bumps, the S-Class floats on asphalt in Comfort mode.
The general noise level is low and, at 180 km/h, you can have a decent conversation. In Sport mode, the suspension obviously hardens and the precise and direct enough steering for a luxury limousine becomes heavier.

Instead of investing money in large 21-inch wheels, the option for the integral steering (1,547 euros) is more worthy. It features a steering angle of 4.5 or 10 degrees. Unfortunately, the test car did not have the integral direction which makes the turning circle quite large, something normal for a limousine over 5 meters long, with a wheelbase of over 3 meters.

The S-Class is safe and quite sporty for its size and at the limit, the intervention of the ESP system is discreet and the reaction is understeering. As with other Mercedes models, the 4Matic all-wheel drive system is designed for maximum safety and not for driving pleasure. It thus favors understeering behavior. It is to be appreciated that the new generation is not heavier, although the comfort and safety equipment have multiplied. 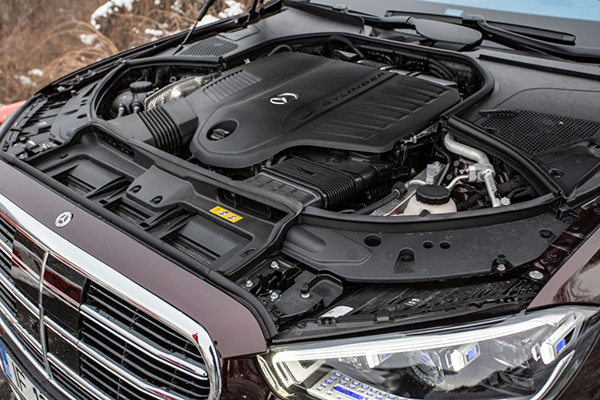 Do you feel there are 2 cylinder less? No. But the car is more economic
What about the engine? Are 6 cylinders enough? In this case yes, because the new 6-inline cylinder unit gets the assistance of an integrated starter generator of 22 HP and 250 Nm, but also that of a small electrically operated compressor.

Basically, it’s a double charge. At low speeds, until the large turbine engages, the overpressure is created by an electrically operated Borg Warner compressor. In just 300 ms, it rises all the way to 70,000 rpm. Then, the integrated generator starter is responsible for hybrid functions such as energy recovery or support of the heat engine to accelerations.

The difference is that you don’t feel that the acceleration is as fast as with a V8 because it is more linear, especially at low speeds. Instead of the explosion of a classic V8 that takes place after a small turbo gap, here the reaction is perfectly progressive and linear and because of this you get the impression that the 6-cylinder mild hybrid system does not offer the performance of a V8.

But the figures show almost perfect equality, the former S 560 with 4-liter V8 and 469 hp being faster by only 0.1 seconds.

Instead, the new mild hybrid engine is much more economical and if you go economically you can get an unlikely 7.2 l/100 km and an average of 9.8 l/100 km in normal driving. From this point of view, the in-line 6-cylinder engine is clearly more efficient than the former V8.

Verdict
The new S-Class impresses with the quality of the interior and the comfort facilities as well as with the new very intuitive ergonomic concept. The augmented reality head-up display is very expensive but worth every penny. The inline 6-cylinder engine and mild hybrid system is nothing inferior to the former V8 but it is much more economical. Only very large 21-inch wheels upset the overall balance of comfort because otherwise everything is at the level of 5 stars.