Delivered new to Japan, this is a stunning 1991 Mercedes-Benz 560SEL 6.0 AMG presented in great condition with nearly 72,964 km (45,325 miles). This 560SEL 6.0 boasts its original engine and stands out among the rarefied 560SEL 6.0 crowd. Both the engine and gearbox have had complete service, and the distinctive AMG 5 Spoke AMG Alloys have new tires. Additionally, attention has been given to both the suspension and brakes. At the time it was introduced, the 560SEL AMG 6.0 was among the most powerful sedans on the road. It packed the legendary 6.0-liter naturally aspirated V8 “Hammer” engine featuring a custom quad-cam head with four valves per cylinder and three-piece, sand-cast cylinder heads. Thanks to the extensive modifications from AMG, the car delivered 380 hp at 5,500 rpm and 410 lb-ft of torque at 4,000 rpm, sent to the rear wheels via a four-speed automatic transmission. The peak torque figure was particularly significant as it was twice as high as what the stock 560SEL could deliver – at half the engine speed.

Auction platform thembmarket.com is selling a very rare 1991 Mercedes 560 SEL 6.0 AMG. For that reason, it’s not too cheap.

This long-wheelbase Mercedes W126 is an example from the last year production cycle of this S-Class generation and was modified by AMG who replaced the 5.6-liter V8 engine with two valves per cylinder developing 282 PS (279 HP) with a 4-valve per cylinder engine developing 385 PS (380 HP) and 556 Nm (410 lb-ft).

The engine is mated to the original 4-speed automatic transmission from the 560 SEL but AMG has fitted a Torsen limited slip differential that improves rear axle traction and the rear subframe has also been reinforced. The exhaust pipes bear the AMG logo. 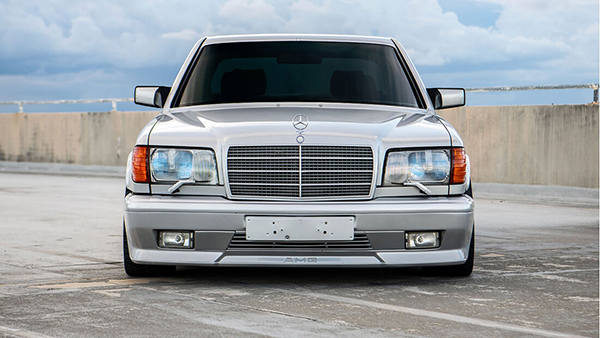 The original Black Pearl paint was replaced by Astral Silver
The original paint was Black Pearl but was repainted in Astral Silver (code 735) in Japan by the former owner and the interior has the original black leather upholstery (261). The AMG four-spoke steering wheel is made by Momo and the AMG instrument cluster has the speedometer gratuated up to 300 km/h and the tachometer up to 7,000 rpm. The car currently has 72,945 km (about 45,000 miles).

The bodywork has sporty accents thanks to the AMG kit which includes specific front and rear bumpers and sills plus a spoiler in the boot lid. The sporty look is complemented by three-piece AMG Aero III wheels that are fitted with Nexen 235/45 front and 275/40 rear tires.

The car underwent a complete inspection in 2021 and according to the carfax report has not suffered any accidents. However, there are a few scratches on the lower body area and it is not rust free, a sign that it has not been in a garage all the time. The auction is being held tonight and the price has already reached $140,000. It remains to be seen whether the car will stay in the US or return home to Germany.