The official press release for the 2022 Mercedes-Benz S-Class press release is 77 pages long. It’s a novel, and after reading it, your brain needs a vacation. But there’s a reason for that excess – the latest S-Class, codenamed W223, packs so much tech it makes a moon landing look like a class project at Clown College. 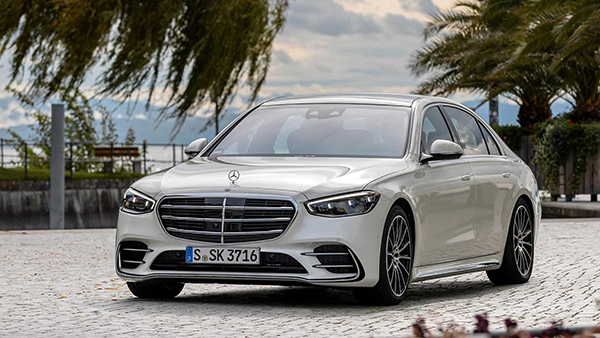 At first glance, much of the equipment might sound like frippery. But the S-Class has always represented the tip of the spear in new four-wheeled features. In ten years, what that expansive press release introduces will be common content in affordable, mainstream cars.

The S-Class enjoys this role because it makes all that technology work in a way that’s reasonable and easy to use in everyday life. Despite the rocket science, this is still a car – the best-selling car in the class, mind you, but still a car. Maintaining that crown means looking more prestigious and driving even better than any other competitor. But conspicuous luxury is slightly less fashionable nowadays unless it’s the result of a sustainable approach. 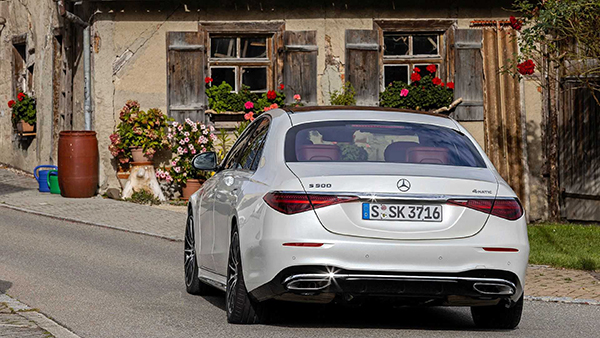 Reinventing An Icon
The 2022 S-Class rides atop an entirely new platform, code-named MRA II. Designed to accommodate more robust electronics and the large battery of the S580e plug-in hybrid, the W223 grows in all directions. Standard-bodied cars span 17 feet, a 2.0-inch increase over last year’s car. The wheelbase grows even more, by 3.0 inches, to 122.4 inches. If you go with the long-wheelbase model (the only one coming to the United States), the overall length grows 1.3 inches, to 17.4 feet.

But despite the growth and all the new tech, the S-Class bucks the trend set by a lot of new cars by losing some weight. More aluminum and high-strength steel have the double benefit of stiffening the body-in-white and shaving 132 pounds, too. That more rigid body cuts down on vibrations and noise, making the S-Class quieter and more comfortable than ever.

Mercedes matched the stronger, larger body with its latest EQ Boost system, which pairs a 48-volt electrical system with an integrated starter-generator and an auxiliary compressor that spools the turbo. The S500 features a turbocharged 3.0-liter straight-six engine, good for 429 horsepower and 384 pound-feet of torque, while the S580’s twin-turbocharged 4.0-liter V8 packs 469 hp and 516 lb-ft. 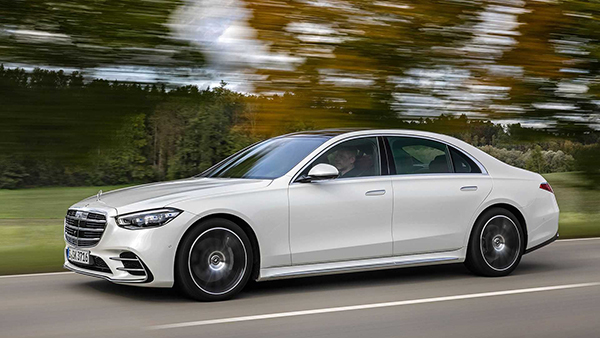 What About The New PHEV?
In Europe, a plug-in-hybrid S580e features the six-cylinder engine with a 110-kilowatt electric motor and a 28.6-kilowatt-hour lithium-ion battery – we expect this one to make it to the US in the not-so-distant future.

The S580e combines the S500’s six-cylinder engine with a 110-kW electric motor and a 28.6-kWh lithium-ion battery that’s larger than that of many all-electric compact cars. The battery pack alone weighs 531 pounds. A normal AC charger will refill the battery at a rate of 11 kilowatts, but a DC charger can manage up to 60, cutting the recharge time down to just 30 minutes. 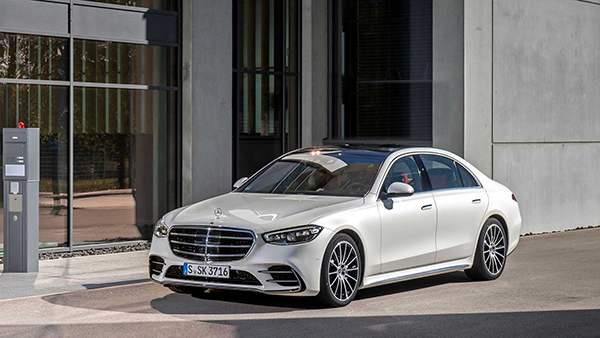 We expect the plug-in S580e to make it to the US in the not-so-distant future.

Mercedes promises 60 miles of range on the WLTP scale (EPA ratings will probably be closer to 30 or 40 miles). We took the 580e on a 29-mile test drive and returned with 21 miles of range, so the 60-mile rating seems realistic if you’re careful with the accelerator pedal.

In all-electric mode, the S580e can manage 87 miles per hour, but even in hybrid mode (there are Battery Hold, E, and Sport settings for that), you can tell the car is trying to rely as much as possible on electricity. You have to push the throttle a little harder to get the gas engine to fire, but that doesn’t matter, because the 150 hp and 325 lb-ft from the electric motor is more than enough to swim through traffic.

Even while carrying around the weighty batteries, there’s enough range onboard that it’s quite possible to run with the gas engine hardly chipping in. The only real drawback we see is that the S580e’s trunk shrinks by 6.4 cubic feet, to 13.0 cubes. 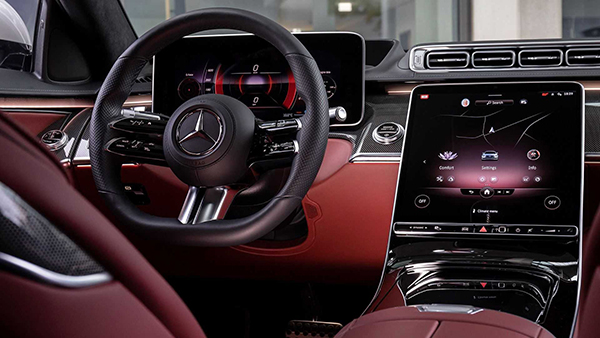 Drive Yourself
An air suspension remains standard, but Mercedes matched it with the excellent E-Active Body Control, which uses the 48-volt electricals and active anti-roll bars to dramatically cut back on body movements. E-ABC also scans the road up to 1,000 times a second and preconditions the dampers to account for any bumps. The suspension can tilt the body up to three degrees to further flatten corners, or if the S-Class detects an impending side impact, it can raise the body an additional3.1 inches to better protect cabin occupants.

The S-Class offers Drive Pilot, a system for Level 3 autonomy up to 37 miles per hour. Mercedes set the system up on a closed course for us so we could experience the technology while browsing YouTube for cat videos (don’t try that on public roads). Buttons on the revised steering wheel, at the 10 and 2 o’clock position, indicate Drive Pilot’s status – green means the situation is appropriate, so a subsequent press of a button is all it takes to hand over control to the car.

If Drive Pilot can’t take over control – for example, in construction areas, tunnels, bad weather, or when the car exceeds 37 mph – the steering wheel lights flash red, demanding the driver take over and that the system will only continue to operate for 10 more seconds. In our short demonstration, the system responded to sudden acceleration, braking, or minor evasive maneuvers in a smooth and relaxed manner. Drive Pilot’s Level 3 capability will arrive in Germany in the summer and in North America at a later date.

While the S-Class takes a lot out of the human driver’s hands, it’ll still indulge them. Our start point, a cramped parking garage at Stuttgart Airport, showed off our long-wheelbase S580’s new rear-axle steering system. The system offers up to 10 degrees of steering angle and shrinks the turning circle by nearly five feet, to just 35.8 feet – the tiny A-Class sedan’s turning circle is 36.1 feet. The S-Class is very impressive in tight conditions. The new system offers its maximum, though, with 20-inch wheels – if you want bigger rollers, the maximum angle is just 4.5 degrees. 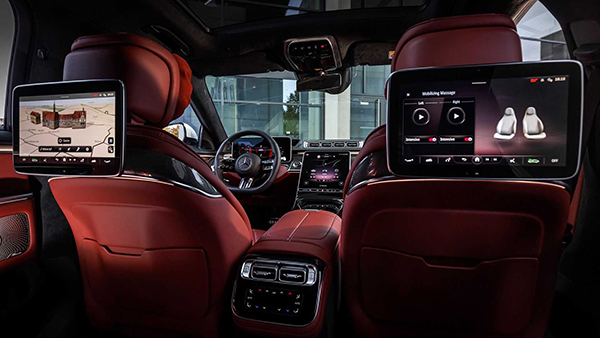 While the S-Class takes a lot out of the human driver’s hands, it’ll still indulge them.

Good as it is in a parking garage, the S-Class is still most at home on the highway, with the latest model feeling more like a living room. The Burmester 4D audio system and its 31 speakers throw crystal-clear music around while the plush seats heat, ventilate, and massage your backside. A three-step adjustable air freshener keeps the cabin smelling nice, and overall, the drive experience is so quiet you could hear a pin drop while driving at 120 mph. This is luxury.

Although the new V8 engine doesn’t sound as subtle or confident as in the W222 – the 4.0-liter is a little tinny under heavy throttle – it accelerates easily before disappearing into the background. It’s reasonably efficient, too, at 11 liters per 100 kilometers.

The chassis is completely focused on comfort, but the new S-Class feels even better in corners than its predecessor. The ride is very soft and vertical motion is an occasional issue, but the S-Class filters the road better than Photoshop can filter an influencer’s Instagram post. Put in a dynamic situation, the S has a good grip on body movements – whether it’s an emergency lane change or heavy braking, there’s an unshakable sense of stability here.

Don’t expect much athleticism, though, even in Sport mode. The steering is typically light and numb, and while the car feels stable, it responds to aggressive cornering with reluctance. The emphasis on keeping passengers safe and comfortable means understeer and strict electronic nannies are the order of the day. But the S-Class is above such base nonsense – get a BMW if you want dynamics. 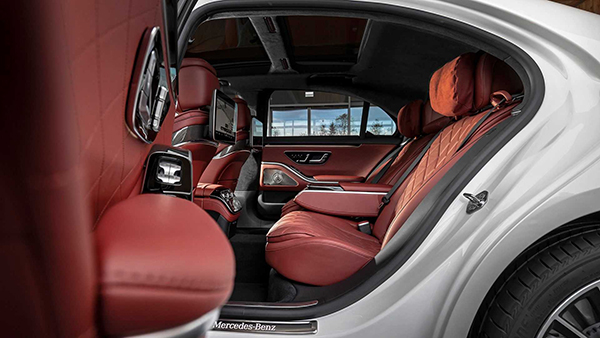 Doing That S-Class Thing
Drivers familiar with the S-Class will clearly recognize the changes that this new generation brings – this is a step away from pomp and toward a clearer, more technical kind of luxury. The new S already looks much more graceful from the outside – it’s much more handsome than the refreshed E-Class or the CLS.

But the design is smart, too. The coefficient of drag is an ultra-slippery 0.22 – better than a Toyota Prius or Tesla Model S – thanks to touches like auto-stowing door handles (which are a bit stubborn to access). Thicker sidewalls, meanwhile, promise comfort and still look nice with 20-inch wheels.

The new S already looks much more graceful from the outside – it’s much more handsome than the refreshed E-Class or the CLS.

The interior takes some getting used to. The new approach is straightforward and tech-focused, as opposed to yesteryear’s playful, almost baroque style. The quality is beyond any doubt, but details such as an A-Class sedan’s steering column or angular air vents disturb the otherwise piquant ambience. Nevertheless, the S remains significantly more opulent than the rather cool BMW 7 Series or chic Audi A8.

Despite the absurd number of functions, the tech suite seems logical and relatively simple. The 12.8-inch vertical touchscreen, like the digital instrument cluster, impresses with sharp graphics. Both screens work via the much-touted touch surfaces on the steering wheel. The pads work fine, but they were better in older products.

The latest MBUX system works via either touch or voice control – the latter is now so advanced that you can even enter into region-specific dialogue. Rather than saying “Hey Mercedes, I’m cold,” “Hey Mercedes, I’m hungry,” and “Hey Mercedes, I need a toilet,” you can say all three in a single command. And now, when MBUX’s virtual assistant speaks, the ambient lighting flickers to the tone of their voice – if the S-Class learns to fly, it could easily take over as KITT in the next Knight Rider remake. 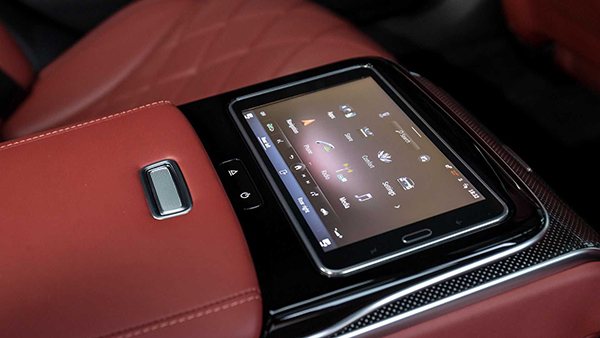 Is Too Much A Good Thing?
The S-Class pairs a new digital cluster with an enormous head-up display. The former can now show three-dimensional effects, relying on eye tracking via a camera to give the viewer a sense of depth. At first glance, it’s super fancy and makes for a cool feature to show off to friends. In practice, though, the gauges become rather distracting after a while.

We’re split, meanwhile, on the head-up display. It requires a 1.0-cubic-foot box in the dashboard and can display content up to 32 away at the size of a 77-inch screen. The amount of information is impressive, as is the readability. The HUD now even shows red when you cross a line or throws blue turning arrows on the road via augmented reality. All of this can certainly be helpful, but often you have the feeling of almost being crushed by it all. We’d probably get used to it, but at first glance, the S-Class specializes in information overload.

This is state-of-the-art tech, but with the odd feature or two, one wonders what the priorities were: genuine benefits to the customer or fulfilling the urge of developers to play. There are so many possibilities in this car and so much information thrown at you, that in the end the S-Class leaves your head spinning. That’s tiring when all you’re trying to do is get from A to B in a dignified way.

The main question for the S-Class is whether this car is too intelligent and multi-faceted for the clientele that has to deal with it. Does too much assistance ultimately distract more than it helps? For younger clientele, probably not. The S-Class’ largest market is China, where the average shopper for this big sedan is about 40 years old. For them, the S-Class and its pleasingly ostentatious design will feel like a complex masterpiece and a bridge to the future. The rest of the world just needs to go along for the ride.