DISASTER Mercedes 300SD First Wash in 18 Years! Can It Be Saved?! | Satisfying Restoration. Today, we tackle the interior & exterior of a RARE, FILTHY Mercedes 300SD, that is covered in dirt and debris that hasn’t been detailed in years that will require us to pressure wash the entire exterior, followed by a wash, clay bar and then polishing the paint to bring back its shine and a full interior detail including mold removal.

DISASTER Mercedes 300SD First Wash in 18 Years! Can It Be Saved?! | Satisfying Restoration

Mercedes-Benz S-Class is among the most luxurious vehicles currently available around the globe. It is also one of the longest-standing nameplates in the industry with origins that can be traced back to the W116 line, which was the first to be officially called the S-Class when it was launched in 1972. About 7 years later, its successor was introduced leaving a significant mark in the history of the entire automotive industry.

The W126 was sold in worldwide in markets including Europe, Japan, and North America. During its 12-year production run a total of 892,123 examples were sold in sedan and coupe body styles, making the W126 the most successful S-Class generation in terms of sales with the longest production run in history. This is just one of the reasons why this generation of the S-Class is still regarded as one of the best engineered and built cars of all time.

W126s in good condition are becoming more difficult to find in the United States, though. The team at WD Detailing found one that has been sitting for years and decided to give it a thorough wash to make it look as good as possible. Sure, there are some imperfections and small rust points that can be fixed only with a professional respray but other than that, this is one absolutely awesome example. 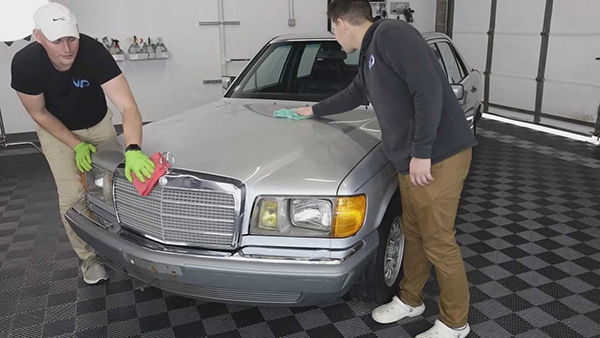 The luxury sedan undergoes a series of detailing procedures, including a pressure wash of the entire exterior, followed by a more detailed wash, clay bar, and paint polishing. The wheels also receive a lot of attention and it’s interesting to note that the rims are just 14 inches in diameter and are among the most sought-after wheels for this model. The exact name of the model is Barock and while relatively popular in Europe, these alloys are a rare sight in North America.

Another interesting fact about this vehicle is that it has a diesel engine under the hood. The famous Mercedes OM617 compression ignition mill powers the silver sedan, generating a peak output of 123 horsepower (92 kilowatts) and 184 pound-feet (250 Newton-meters) of torque. Interestingly, the 3.0-liter diesel was available only in the US, Canada, and Japan at the time.