The fight for driving automation is officially on and Europe’s joining it. Mercedes-Benz just announced that two of its cars will very soon be ready to park by themselves at an airport garage in Germany. It doesn’t sound like much at first, but here’s why a major milestone was reached here. 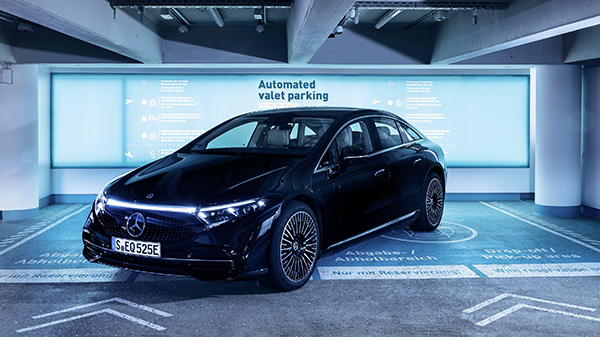 Mercedes-Benz S-Class and EQS, equipped with the Intelligent Park Pilot option and built as of July 2022, will be very soon capable of parking by themselves at the APCOA P6 garage at Stuttgart Airport. At a later yet unspecified date, the same two S-tier cars built starting from December 2020 and April 2021, respectively, will receive the necessary upgrades and permissions to do the same.

Mercedes-AMG and Mercedes-Maybach S-Class and EQS models are excluded from the list of vehicles capable of Level 4 automated parking. The automaker does not explain why, but it is probably due to some sensors not being fully available on the well-equipped models.

Mercedes-Benz already obtained approval from Germany’s Federal Motor Transport Authority (KBA) for this feature. This was paramount since the two abovementioned models will perform the automated valet parking by themselves with no assistance being needed from the human sitting in the driver’s seat. Also, no supervision is involved. Everything relies on technology.

The German manufacturer says drivers of the eligible vehicles will be able to arrive at the parking space, get out of the car, and send it to park itself in a pre-booked spot through a phone app. When they need it again, the S-Class or the EQS can come right back to the pick-up point.

Mercedes-Benz says Bosch has installed sensors in the APCOA P6. They scan the area where cars are moving and communicate with the vehicle that’s trying to either go to its parking space (be it at the same floor level or on another) or leave it and find the owner. If Bosch’s sensors detect obstacles, they’ll let the vehicles know and the cars won’t move until the path is clear.

Locally known as Parkhaus P6 Flughafen Stuttgart APCOA, this area will also be, according to Mercedes-Benz, the first in the world where “commercial use of the driverless parking system” will be enabled.

Mercedes-Benz and Bosch started working on enabling Level 4 self-parking in 2019, but their current approval permit extends beyond the companies’ original plans. Now, customers or renters of eligible cars that have the necessary software and hardware installed, will be able to come to the designated parking place in Stuttgart and witness how the vehicles maneuver themselves in tight spaces with no human oversight. Or they could just simply leave and let the cars do their thing.

The news about the progress made together with Bosch comes shortly after we discovered that the German automaker is going to offer a subscription-based software update that would unlock improved acceleration.

Finally, according to SAE J3016 standard for driving automation, a Level 4-certified vehicle will not require you to drive or take control at any point. However, the autonomous features are available “under limited conditions and will not operate unless all required conditions are met.” That’s why Mercedes-Benz did not reach a Level 5 certification – this new feature will be available in a controlled, well-known environment.