If you want an example of trickle-down technology, look no further than the Mercedes-Benz S-Class. The S-Class has spent the last 50 years introducing new technology or packing technology that Mercedes has made reliable enough for its flagship model. As well as being a four-wheeled crystal ball for automotive tech, the S-Class is renowned for its luxury, style, and elegance. If you’re in the market for a luxury sedan to drive or be driven around in, the Mercedes S-Classhas become the gold standard. In 2022, the S is turning 50. To this day it remains the benchmark for executive comfort, so we’re celebrating that by revisiting its greatest hits throughout the generations.

First, though, a little history. The S-Class didn’t appear from out of nowhere in 1972. It was pre-dated by three series of sedans and coupes, including the W111 and W112 chassis code cars of the 1960s, often thought of as S-Class models. Indeed, their sedan model designations were a number followed by the letter S. They were powered by either straight-six or V8 engines and exuded the class and style we now recognize as the S-Class’s signature. In 1965, Mercedes introduced its W108/109 chassis codes that became the direct precursor to the S-Class as we know it now. The most luxurious and potent models featured a 6.2-liter V8 engine, an automatic transmission, air suspension, and customers could order it with a burl walnut interior trim and power windows. 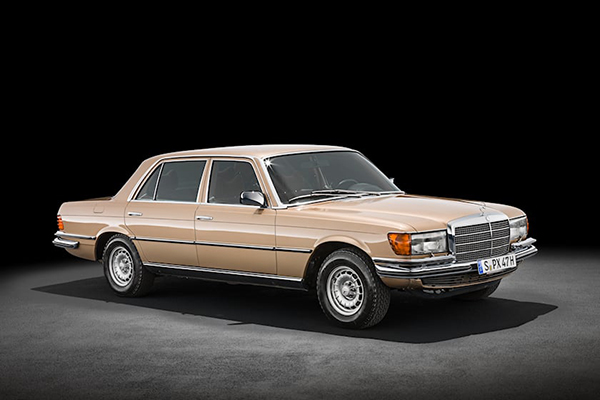 Mercedes-Benz 450 SEL 6.9 (1975–1981)
The W116 line of Mercedes executive cars debuted in 1972 and was the first to be officially designated as S-Class. It arrived with a hefty price tag and four-wheel independent suspension with disc brakes, and an emphasis on safety as well as style and comfort. The 450 SEL 6.9 was the cream of the W116’s crop, running on a long-wheelbase version of the chassis with a complete hydropneumatic suspension system and powered by the Mercedes M100 V8 engine. The 6.3-liter engine was bored out to 6.8 liters (not 6.9 as it was named) and was so big that a dry-sump lubrication system had to be fitted to get it under the hood without ruining the exterior lines. Not only was it incredibly luxurious to ride in, but despite its size and weight was the fastest and quickest accelerating European sedan for a while. It could reach 62 mph in 7.4 seconds and topped out at 149 mph. 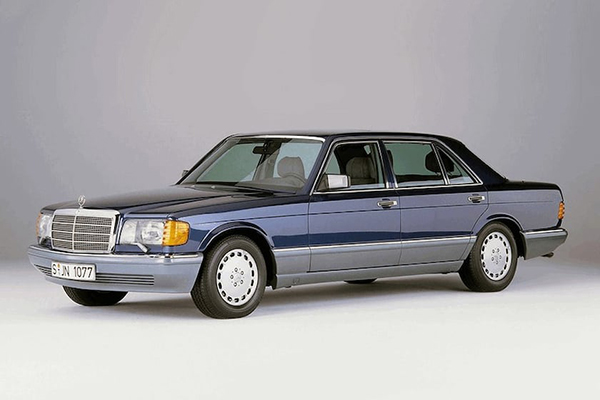 Mercedes-Benz 560 SEL (1986-1991)
The S-Class’s W126 chassis was the longest-serving S-Class and included improvements in everything comfort, safety, and power, as well as weight, aerodynamics, and, ultimately, fuel economy. Seatbelt pre-tensioning and crumple zones were introduced at launch in 1979. In 1986, a “Second Series” was introduced as a heavy update and introduced the flagship for the decedent 1980s, the Mercedes-Benz 560 SEL. The 5.5-liter V8 made close to 300 hp and could go toe-to-toe in a straight line with Porsche and Ferrari models. Of course, it would fall off the road at the first bend, but it was unmatched in comfort and style. The W126 focused as much on build quality and style as it did technology, comfort, and convenience. It was where old school money met the new and, to some people, the greatest and last of the great S-Class models. 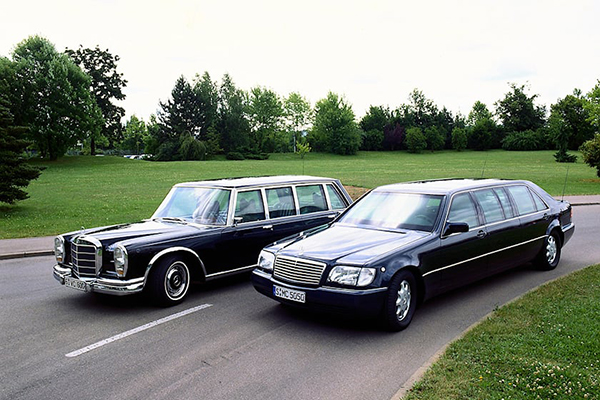 Mercedes-Benz S 600 Pullman (1995)
The W140 generation was introduced in 1991 after an 18-month delay, and it was over budget. Factors contributed to slow sales, like the recession and Japanese luxury brands entering the market) but the W140 was a peach and another contender for the last great S-Class in enthusiast’s eyes – it was the last of the ‘luxury at any expense’ models. The pinnacle for the W140 series, outside of special orders from people with absolutely no price sensitivity, was the 600 Pullman. It could be ordered with different interior configurations and came with privacy glass as the owner wasn’t going to be driving it themselves. The S500 used a 5.0-liter V8 while the S600 used a 408 hp 6.0-liter V12, and the interior included a leather dashboard, interior door panels, and a suede headliner. The S600 carried on the great Mercedes tradition of providing presidents, prime ministers, and dictators alike with complete luxury and an available armor protection package.

Mercedes-Benz S600 coupe (1992-1996)
It’s easy to forget that there are two-door S-Class models out there, and in this case, because Mercedes later badged the S600 coupe as the C140-generation’s CL-Class. The S600 coupe was for if sir or madam would like a little something for the weekend. It wasn’t offered with mild inline-six engines or the S500 coupe’s V8. No, you bought the S600 coupe because it had all the style and class of the sedan but with a sportier flavor and a whopping great 6.0-liter V12 making 389 hp and 421 lb-ft of torque. The naming was all over the place, but the 600SEC, 600 S, and CL600 were essentially the same car and designed to go cross-country in speed and style. 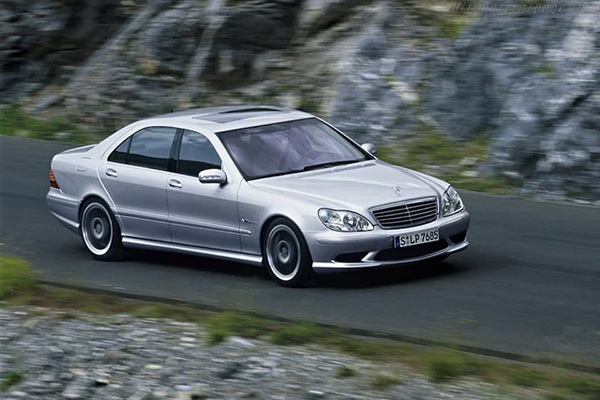 Mercedes-Benz S 65 AMG sedan (2005)
The W220 generation S-Class ran from the 1999 to 2005 model years, except in America, where it ran from 2000 through the 2006 model year. It was greeted warmly by reviewers but noted that the options list was now long and expensive. It came as a slightly smaller package than the previous generation but with greater interior space, and there were AMG models available. The most powerful, and for the one year, the S65 AMG sedan appeared with a twin-turbocharged V12 making a monumental 604 hp and 738 lb-ft of torque. Monumental, because the 2020 S 65 AMG Final Edition made the same torque figure and just 17 extra horses. Zero to 60 mph came in 4.2 seconds and with all the swish one needed to impress one’s business associates. 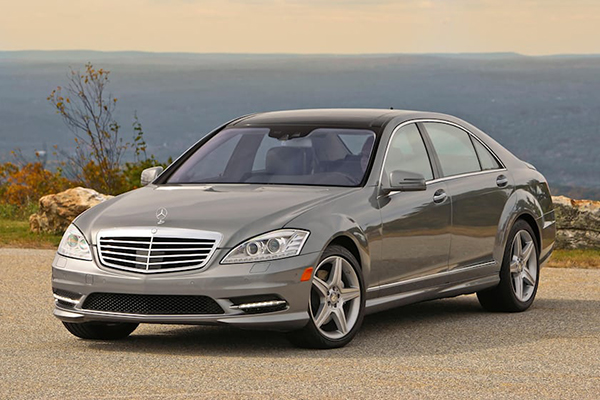 Mercedes-Benz S 550 4MATIC (2011–2013)
For the 2006-2013 W221 generation, Mercedes again unleashed more technical innovations and developments on the S-Class. It got bigger, and interior space grew with it, and any hint of plastic you found in the W220 generation disappeared in favor of the wood, leather, and metal that discerning buyers wanted. On upper models, like the S 550, you would find things like self-closing doors as standard and the technological marvel that was the Mercedes 7G-TRONIC transmission. It was the first seven-speed automatic transmission to come from the factory in a production vehicle and matched to the S 550 4MATIC’s 455 hp twin-turbo V8; it could either raise hell from a standing start or disappear entirely in the driving experience. With the 4MATIC all-wheel-drive system, 7-speed auto, and AIRMATIC suspension, the S 550 was the W221 model to own.

Mercedes-Benz S580 (2021-)
The W223 went into production in 2020 for the 2021 model year, and while it looks like an evolution, things have changed dramatically. The lineup has been slimmed down to two trims, at least for now, the luxury level has been cranked, and the new school of technology and slick lighting has been fully embraced. The S580 eschews the V6 mild hybrid of the S500 for the tried and true 4.0-liter twin-turbocharged V8 making 496 hp and 516 lb-ft of torque. It’ll sprint to 60 mph in 4.4 seconds without passengers feeling a sense of urgency or any threat of spilling their champaign. We’re not going to list all of its features here as, well, there’s a reason Mercedes made its owner’s manuals digital – you can’t fit a forest’s worth of paper in a glovebox. In fact, the whole experience now feels digital, although the Nappa leather upholstery reminds us texture still has value.