The S-Class might be synonymous with luxury and comfort, but for the past 30 years we’ve also seen AMG hard at work producing performance-focused variants and now a new Mercedes-AMG S 63 is on the way. 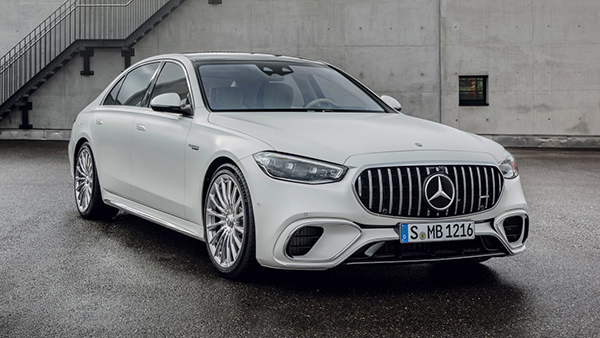 To give it its full name, this is the Mercedes-AMG S 63 E-Performance – the E-Performance part signifying the use of electricity in the sporty limo’s powertrain. The EQS 53 is Mercedes’ all-electric performance limo so the S 63 E-Performance has been given plug-in hybrid power coupled with a twin-turbocharged 4.0-litre V8.

The use of eclectic power is more for performance than environmental credentials in the new S 63 and the car shouldn’t lack for oomph with 791bhp and 1,430Nm of torque on board. Even with those numbers it’s not the most powerful AMG ever – that title belongs to the 831bhp AMG GT 63 S E-Performance, with which the S 63 shares its hybrid layout. The 604bhp V8 combustion engine is supplemented by a 187bhp rear-mounted electric motor, which is powered by a 13.1kWh battery pack situated above the rear axle.

According to Mercedes, the unit has been developed in partnership with the company’s Formula 1 powertrain division, and offers 21 miles of pure-electric running. The S 63 weighs 430kg more than the not-so-lithe C 63 PHEV at 2,595kg, but despite this the luxury saloon hits 62mph from rest in 3.3 seconds, and runs onto a limited top speed of 155mph. With the optional AMG Driver’s Package, this rises to 180mph.

Drive is sent to all four wheels through a nine-speed multi-clutch transmission, and at the rear, there’s an electronically controlled limited slip differential and an additional two-speed gearbox. This shifts into its higher ratio at around 87mph to improve the efficiency of the electric motor, and the combustion engine can be decoupled to minimise drivetrain losses. 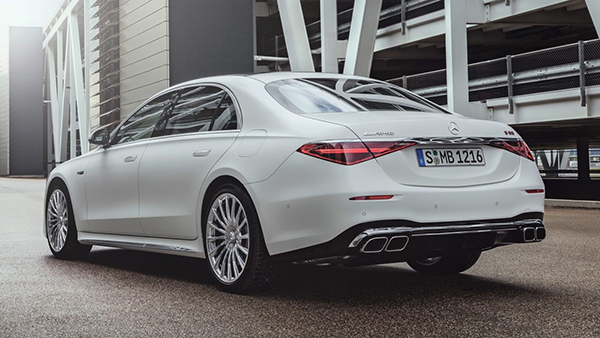 Just like the new C 63 E-Performance, the temperature of the S 63’s 400V battery (twice the size of the C 63’s 6.1kWh unit) is regulated by a liquid cooling system, which has been designed to maintain performance and efficiency through a range of loads and ambient conditions, and the driver can choose from four stages of energy regeneration to top it up on the move.

In addition, there are seven drive modes available to alter the S 63’s character, ranging from pure-electric mode to Sport +, which ramps up the steering, suspension and power delivery for maximum aggression.

Mercedes’ performance division has lavished its most advanced chassis tech on the new S 63, with active engine mounts, a reinforced bodyshell and air suspension that features adaptive dampers. The system can tweak compression and rebound settings at all four corners on the move, and for extra stability at speed, the ride height drops by 10mm above 75mph. Active anti-roll bars have been fitted to contain the car’s mass, too.

The S 63 also employs rear wheel steering to mask its considerable 5.3-metre length, turning those back wheels in the opposite direction to those at the front by up to 2.5 degrees at low speeds. Beyond 62mph, the front and rear axles steer in the same direction for extra stability. Upgraded composite brakes are equipped as standard, although lighter ceramic items are available at extra cost.

To signify the extra performance, the S 63 receives a new grille with vertical slats and beefier bumpers. Typical of an AMG, four tailpipes have been integrated into the rear apron, and deeper side sills provide a more hunkered-down stance. To help apply the S 63’s significant power to the road, Mercedes has fitted a set of 21-inch forged wheels wrapped in Michelin Pilot Sport 4 S tyres. 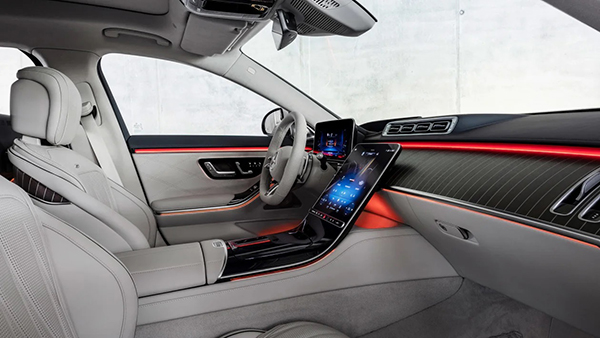 Interior and technology
The interior of the 791bhp brute is similar to that of the standard S-Class, save for a unique upholstery design with AMG logos embossed into the headrests. There are numerous bespoke trim materials dotted around the cabin, too, and the S 63 is a strict four seater with the firm’s individual ‘First-Class’ chairs in the back. The high-performance battery eats into the S 63’s boot capacity, though, which shrinks from 540 litres to just 305 litres.

Behind the AMG-specific steering wheel, which houses the extra driving modes, infotainment duties are catered for by a 12.3-inch portrait touchscreen in the middle of the dash. This pairs with a fully digital instrument cluster, and runs Mercedes’ MBUX software – albeit with AMG-specific tweaks. These include a racy Supersport theme and performance displays, which list powertrain temperatures and drive modes. Telemetry data is also available via the AMG Track Pace menu which is fitted as standard – to use the feature you’ll have to be on a private road or a track day, however.

An augmented reality head-up display, semi-autonomous driving assists and the “Hey Mercedes” voice assistant also form part of the S-Class’s comprehensive tech suite, while a pair of rear seat displays mirror the UI of the main touchscreen. Pricing for the S 63 is yet to be revealed, but considering its complex hybrid setup and huge power, it could cost upwards of £150,000.