Mercedes-Benz introduced the W111 series of cars in 1959, and various iterations were made available until 1971, including four-door sedan, two-door coupe, and cabriolet variants. This car series is nicknamed Heckflosse (“fin tail” in German) for their prominent rear tail fins, especially in their sedan incarnation. 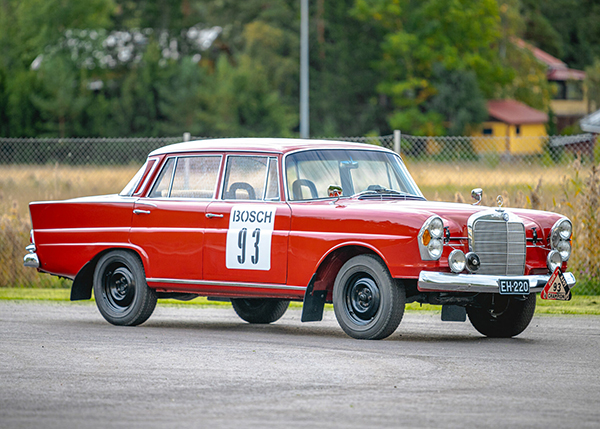 Though never intended to become a motorsport legend, the Mercedes-Benz W111 220 SE example you see here got into the hands of a talented rally driver and became a remarkably successful rally car at the beginning of the 1960s.

It started life as a regular Mercedes W111 Heckflosse that was shipped out to a Finnish dealership to be sold, but the dealer had it modified for rally and handed it over to his son Rauno Aaltone, who drove it to victory in the 1961 Jyväskylän Suurajot, or Rally of the 1000 Lakes, in Finland. 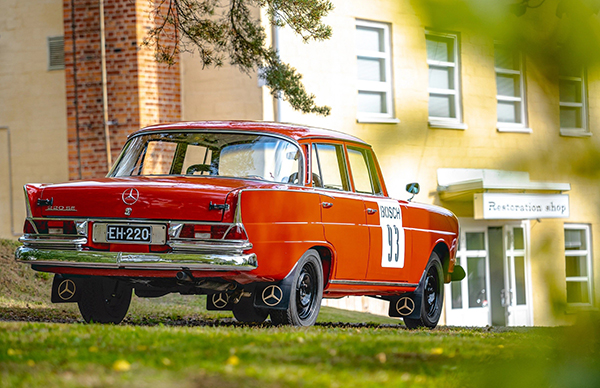 The previous year, Aaltone and co-driver Siutla Pentii had campaigned a Mercedes-Benz 220SE in the 1960 edition of the competition but only managed to snatch 7th place overall. In 1961, Rauno Aaltone and Väinö Nurmimaa entered chassis 014930 into the competition, an example that was taken straight from the showroom floor and was hastily modified to rally specification. A lightweight rear bench seat was added to the car, along with stiffer springs, a front bumper sourced from a Kaiser, and a set of eight 15-inch steel wheels.

Surprisingly, despite its bulky design and hefty curb weight, the Heckflosse managed to beat the other 59 competitors, finishing five minutes ahead of the nearest car participating in the event, a Citroën ID 19 driven by Pauli Toivonen and Jaakko Kallio. 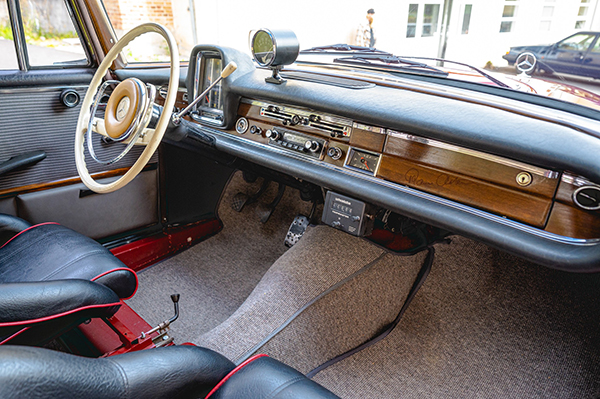 At some point in its lifetime, the winning car was converted back to road specification and sold to a private customer. Some years later, the W111 ended up at the Mobilia Rally Museum in Kangasala and was again fitted with the rally specification kit.

This particular 1961 Mercedes-Benz 220SE example is now up for auction via RM Sotheby’s and is set to roll across the auction block on November 26. It is restored to period-correct rally-winning specification and would make a perfect companion for long-distance tours and historic rallies.