Heads of state, and most of the time even lesser politicians, love the be chauffeured around in expensive, luxurious cars. There’s a general, unspoken consensus that these cars need to be relatively new, because what’s a politician without the most recent tech?

There are some out there however, like say the British Royal family, who like the elegance of older cars enough to still use them for official state business. And one has to admit, nothing can beat the prestige of old Rolls-Royces, Bentleys, or Aston Martins.

Elsewhere around the globe, where these cars are either too expensive or not representative enough to be used, Mercedes-Benz is generally the go-to brand. Indonesia, for instance, generally gets to its president being driven around in an S600, but we also have the G-Class in the state portfolio.

We mentioned Indonesia because that’s where this Mercedes-Benz 220SE state limousine comes from. It’s not an actual car, but it does give us a glimpse of how much suitable for this role a 220SE from 1962 is, compared to an S600. 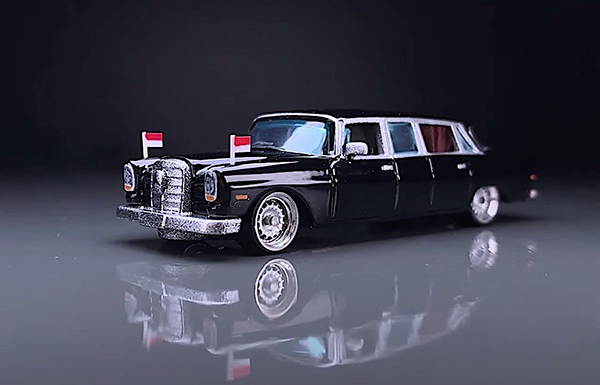 We said this is not a real car, because it’s not. We’re looking at a diecast Mercedes-Benz, a Matchbox incarnation of the fintail, that has been in production in this form since 2020.

As you know already, Matchbox is in the habit of replicating real cars as faithfully as possible, but a quick look at this thing here is enough to show this is no regular SE, real or toy. It’s longer, classier, and more imposing than the original.

The limousine 220SE is the work of a shop called Jakarta Diecast Project (JDP), which specializes in re-making diecast vehicles into incredible custom projects. You can get a sense of what it took to stretch this toy car and remake it into a tiny ride for tiny heads of state in the video attached below.