A new teaser image from Mercedes has given us our best look yet at the new GLC SUV before its full unveiling on 1 June. 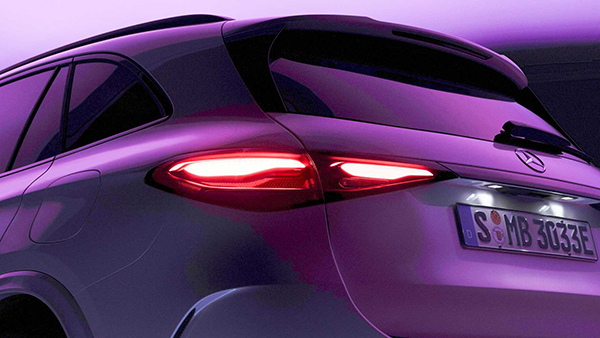 The image confirms the design seen in previous spy shots, with an evolution from the outgoing GLC via a similar, albeit slimmer, rear light cluster. It flows into an overhang just like with the outgoing model, but now there’s a new chrome strip below the Mercedes badge on the bootlid.

There’s also a roof spoiler and a vent behind the rear wheel – a common design trait shared with much of the current Mercedes range.

From previous spy shots we know there will be a pair of narrower lights and neater surfacing, bringing it into line with the latest Mercedes models. Joining the evolutionary styling will be a totally new interior, featuring a new steering wheel with touch controls and the brand’s latest MBUX infotainment suite.

Much of the interior will be familiar from the new C-Class, including a 12.3-inch digital instrument display that will sit ahead of the driver, with an 11.9-inch portrait panel in the centre of the dashboard. The system will offer smart home functionality and music streaming, along with the ‘Hey Mercedes’ voice assistant and an augmented reality system. This can add extra information to an external camera feed on the infotainment display, such as house numbers, for example. A ‘transparent bonnet’ option will also allow drivers to see a virtual picture of ground below the front end of the car when tackling off-road obstacles.

The new GLC utilises a new MRA2 platform borrowed from the latest C-Class, resulting in improved packaging, interior space and a larger 600-litre boot. A selection of mild-hybrid and plug-in variants will be available, beginning with a 2.0-litre four-cylinder petrol engine that uses a 48 volt starter-generator for a total of 255bhp and 400Nm of torque. The diesel is a 2.0-litre unit, again with 48 volt tech, that produces 261bhp and 550Nm.

These two engines form the basis of three plug-in hybrid models – two petrol and one diesel – which will be augmented by a 134bhp, 440Nm electric motor integrated into a 9-speed automatic gearbox. Mercedes promises a pure-electric range of well over 62 miles.

The new GLC will be available with a Driver Assistance package that includes lane keep assist that uses a 360-degree camera and functions at up to 130mph. The car’s adaptive cruise control is more advanced than before too, being able to respond to stationary vehicles at speeds of up to 62mph.

The optional Driving Package also adds air suspension with adaptive dampers and four wheel steering, with the rear wheels turning to a maximum of 4.5 degrees to make the GLC more stable at speed and increase its agility through slower corners.

A 12.3 inch digital instrument display will sit ahead of the driver, with an 11.9-inch panel in the centre of the dashboard. The system will offer smart home functionality and music streaming, along with the “Hey Mercedes” voice assistant and an augmented reality system. This can add extra information to an external camera feed on the infotainment display, such as house numbers, for example. A ‘transparent bonnet’ option will also allow drivers to see a virtual picture of ground below the front end of the car when tackling off-road obstacles.

Mercedes’ 2022 model offensive
But while the next GLC will aim to make a splash in a market space that’s safe territory for Mercedes, much of what’s in development behind the scenes at the brand’s HQ will see the brand go down unexplored paths, as well as revisit old ideas with new impetus.

A new G 4×42 is being readied for introduction this year, and it’s been caught testing several times by spy photographers. The format looks similar to that of the previous version of the luxury monster truck, transformed by the fitment of portal axles and huge off-road tyres that enable massive ground clearance. The new car will benefit from the latest G-Class’s updated platform and driver technology, alongside its serious off-road assistance systems.

We’ll see an electric stablemate for the regular G-Class, too, although not until 2024. Mercedes has confirmed that it intends to turn its off-road legend fully electric, and the EQG nameplate has been trademarked. Technical details are unknown for now, but it’s thought the brand will electrify the current car’s ladder chassis, rather than turn to a purpose-made EV platform such as the new EVA system under the EQS limo. The brand is likely to preview this EQG with a concept much sooner than its anticipated 2024 release.

Electric SUVs are in vogue, and Mercedes has already released the seven-seat EQB. Following this will be two electric SUVs built on the brand’s fit-for-purpose EVA platform. The EQE and EQS saloons will gain SUV stablemates by the end of 2022, integrating both the drivetrain and cabin technology of their lower-riding namesakes.

The EQS SUV will most likely become the longest-range electric SUV on the market, with a slightly downgraded estimate on the EQS saloon’s official 484 miles. It will also aspire to be the most luxurious electric car on the planet, because the EQS SUV will gain a Maybach version come 2023. We’ve already seen a concept previewing this model, but the transformation will likely be in keeping with that of the Maybach GLS compared with the regular version of the brand’s flagship SUV: bespoke styling and badging, unique touches in a finely crafted cabin, and with two full-size seats in the rear.

Hybrid technology will be used in the next C 63 saloon and estate, rather than a fully-electric setup. The next iteration will drop V8 power in favour of a development of the A 45’s 2.0-litre four-cylinder petrol turbo combined with an electric motor, targeting at least 500bhp from both power sources combined.

One AMG hybrid we’ve seen for some time now – but not in production form – is the AMG One hypercar. It uses a version of the 1.6-litre V6 hybrid turbo used in Mercedes’ all-conquering 2016 Formula One car, with 986bhp and modified to enable pure-electric running. Teething troubles have delayed its arrival, but we should see it on roads in 2022.

Breaking cover in 2023 will be a car with a new name, the CLE. Also coming as a coupé, this will cover fresh ground for Mercedes as a bridge between the C and E-Class convertible and coupé models, replacing both to reduce complexity in the line-up. It means that Mercedes is poised to limit the next-gen E-Class, also due in 2023, to saloon and estate bodies only.

And CLE isn’t the only new badge that will be appearing in the near future. The brand has recently revealed the T-Class, which is a van-based MPV based on the same platform as the latest Renault Kangoo. As with the Renault, Mercedes is planning an all-electric version – the EQT, which has already been previewed in concept form. This will be launched towards the end of next year.