The Mercedes-Benz GLC 300 has earned a Top Safety Pick award from the Insurance Institute for Highway Safety, but the GLC needs specific equipment in order to hit that mark.

Besides achieving a Good score in all six of the agency’s crash-test evaluations, in order to be named a Top Safety Pick, a vehicle’s collision-avoidance systems and its headlights also must meet minimum standards of effectiveness. On the GLC 300, the automated collision-avoidance system is optional, part of the Driver Assistance Package for $1,700. Due to insufficient illumination, the model’s standard halogen headlights are rated Poor by the IIHS — not good enough for a TSP. The optional LED headlamps with curve illumination (bundled with automatic high-beams for $700) get a Good rating, however. So, buyers must tick both those option boxes in order to get a Top Safety Pick–rated GLC 300. 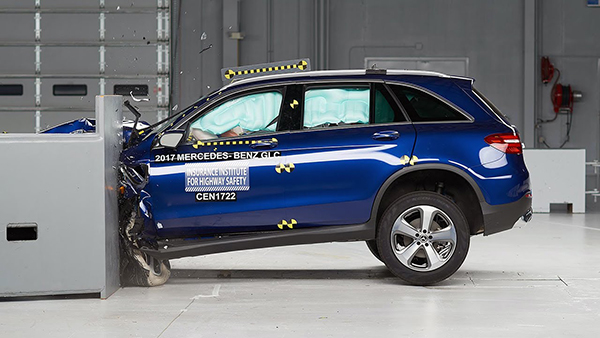 This generation GLC originally was introduced for 2016, and crash-tests of the vehicle were performed in 2017 and 2018. The GLC earned Top Safety Pick+ ratings for 2017, 2018, and 2019. But for 2020, the IIHS tightened requirements for TSP+, disallowing models unless all versions of the headlamps are rated Acceptable. Thus, the subpar base headlights now hold the GLC 300 back from the “Plus” score.