A new teaser by Mercedes-Benz confirms that the GLC SUV is getting a next-generation series soon. New photos of its camouflaged prototype hint a lot about what we should expect from it. 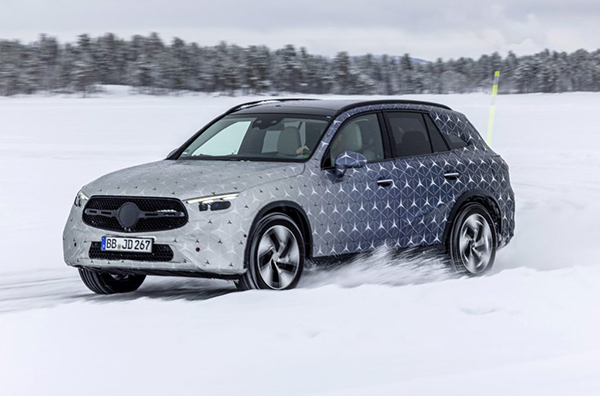 Power
The next-gen Mercedes-Benz GLC will start with the GLC 300 trim. Since the C-Class is the basis for the GLC range, the latter also mirrors the numeral designations of the former. With that, the base trim of the SUV will follow C 300’s setup featuring a 2.0-liter inline-four engine with a 48-volt hybrid system. The powertrain will produce a total output of at least 255 hp and 295 lb-ft of torque distributed either by the standard rear-wheel-drive system or the optional all-wheel-drive system.

As for the high-performance trims, the SUV will likely get AMG GLC 43 and AMG GLC 63 trims powered by hybrid inline-four pots. The latter is expected to dish out over 500 hp similar to its C-Class counterpart.

Design
From the looks of it, the new GLC will still carry out the signature form of its predecessor, but with some styling overhauls to keep the product fresh against the competition. The noticeable changes in the next-gen model include a larger body with a wider stance, fatter rear wheel arches, and revised wheels highlighted by triangular spokes, which again copy the ones fitted on the C-Class.

Technology
The GLC will certainly share the same level of tech found in its sedan sibling. Among them are the latest MBUX infotainment system as well as the standard driver assistance systems available on the C-Class.

Arrival
The official unveiling of the Mercedes-Benz GLC will probably happen in the latter half of 2022. The SUV is expected to bear a 2023 year badge.