Mercedes-Benz ended 2020 with a bit of a bang. For the fifth year in a row, the Stuttgart-based automaker bested BMW in terms of worldwide sales. The largest market was China, and obviously enough, the GLC compact utility vehicle was the best-selling nameplate from the Three-Pointed Star in 2020. 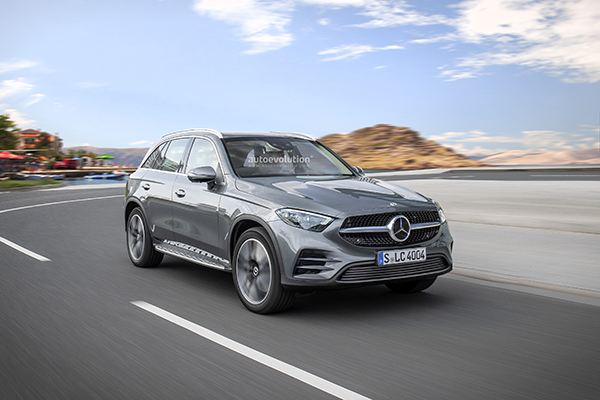 Introduced in 2015 for the 2016 model year as the successor to the GLK, the GLC will be redesigned from the ground up next year under the X254 codename. Spied on many occasions with varying degrees of camouflage, the crossover has been masterfully rendered with an eye on these spy shots.

Bernhard Reichel imagines the luxury-oriented utility vehicle with a simple lighting signature for the headlights and a front bumper that mixes elegance and sportiness in equal measure. The greenhouse is arguably the most similar feature to the X253 we have nowadays. Truth be told, Mercedes doesn’t have any incentive to make serious changes to the exterior styling.

Slightly larger than its predecessor, the second-generation GLC rides on the MRA 2 vehicle architecture that was introduced by the S-Class and C-Class for the 2021 and 2022 model years. Because the X254 is close in size to the C-Class, let’s make a few educated guesses about the hardware and cabin.

Air suspension and level control for the rear axle should be standard issue, along with mild-hybrid electrification in the guise of an integrated starter-generator unit and a 48-volt system. The steering wheel is going to frame a high-resolution display instead of conventional gauges, and the infotainment system’s screen will be available in 9.5- and 11.9-inch flavors.

The 9G-Tronic automatic transmission will be the only choice available, and powertrain options are going to include two plug-in hybrids: the GLC 300e and GLC 300de. Speaking of which, Mercedes will phase out six- and eight-cylinder mills from the GLC lineup just like it did with the C-Class.

In a similar fashion to the Mercedes-AMG C 63, the GLC 63 will be a four-cylinder PHEV that’s estimated to crank out approximately 550 horsepower.