When it comes to SUVs, plenty has changed for Mercedes since it first entered the fray in 1997 with the M-Class. An expansive line-up of SUVs means that cars of this type accounted for 49 per cent of all Mercedes sold globally in 2021. The company has been transformed by these vehicles, and the mid-size GLC has been a big part of that change. 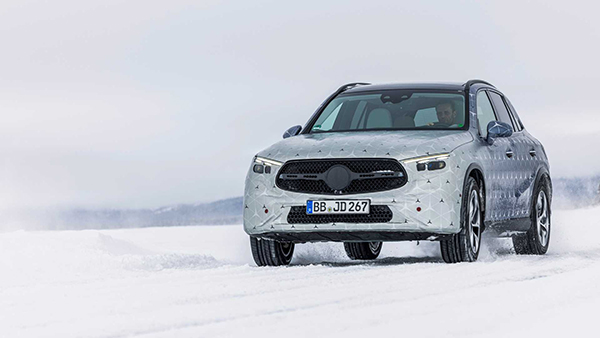 The Mercedes-Benz GLC-Class, and its GLK predecessor, have sold in excess of 2.5 million units since a 2008 introduction. It’s Mercedes’ best-selling model. All of which makes a new one a big deal. Due to be revealed later this year as a 2023 model, we got the jump on driving the new GLC in prototype form, while Mercedes massages its new model prior to launch.

Driving at Mercedes’ Swedish winter test facility, on hard-packed snow and ice, the new GLC-Class was wearing a light disguise inside and out so we’re not going to comment too deeply on its design. But as our renderings show, it’s safe to say the automaker isn’t going to be messing too much with the styling of such a hot-selling model, so think evolutionary, rather than revolutionary.

What is clear is there’s an extended wheelbase, the engineers admitting that it’s 0.6 inches longer between the wheels, which might not seem like much, but it does make the entire cabin feel that little bit more accommodating.

Overall, the interior feels more spacious than the outgoing GLC, particularly in the rear, where there’s more head and legroom. The feeling of airiness is also aided by the narrow profile at the top of the front seats. As you’d anticipate given the badge, the build quality is high, the materials and fit and finish, even in our well-used prototype, being excellent. The trunk space grows marginally over the 19.4 cubic feet of the outgoing car, for a maximum seats-up capacity of 21.1 cubic ft. That will be slightly less with the GLC coupe, which is expected to be retained in the GLC model line-up, and follow the standard SUV shortly after. 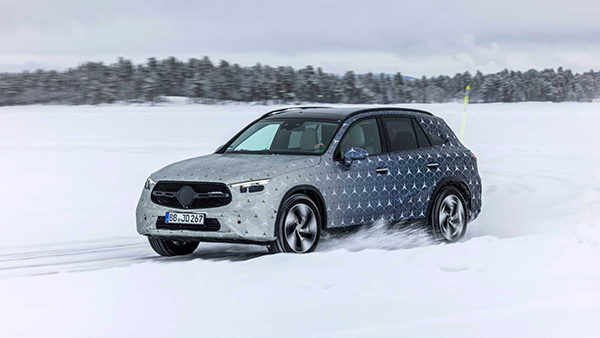 ICE On Ice
Somewhat unsurprisingly, the GLC borrows heavily from the C-Class line, sharing its powertrains. As usual, which engines on offer though will depend on your market. In the US, that means versions of the turbocharged 2.0-liter four-cylinder gasoline engines only. Mercedes-Benz has only released one figure for this four-cylinder turbo, that being a maximum output – without AMG’s input – of 255 horsepower and 295 pound-feet of torque. Europe and other global markets will additionally be offered 2.0-liter turbodiesels of varying power outputs.

With Mercedes-Benz already on its path for overall electrification, every engine in the new GLC line-up will be a ‘hybrid’ though that’s very much in the mild tense, with all featuring Mercedes’ second-generation starter-alternator integrated into the drivetrain, giving a 22 hp and 184 lb-ft boost to the drivetrain in conjunction with its standard 48-volt onboard electrical system.

If you’re after greater electrification over the standard models, Mercedes will offer three plug-in hybrids (although we don’t know which, if any, will come to North America). Two gasoline models and a diesel will be more comprehensively electrically assisted. These plug-ins – combining a 134 hp- and 325 lb-ft-electric motor within the 9-speed automatic transmission and a battery pack – give the plug-in models what Mercedes-Benz describes as “well over” 62 miles of electric-only range on the European cycle.

Those plug-ins will allow the GLC to drive at speeds up to 148 mph using the electric motor alone, and, optionally, can be specified with quick charging capability to take advantage of faster, more powerful public chargers. 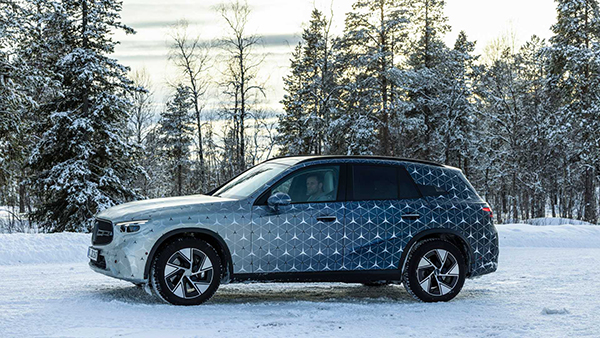 EQ Test
Given the fact that we were driving the Mercedes-Benz EQE prior to jumping in the GLC prototype here (in GLC 220d form), the expectation was of a lack of refinement compared to the whisper-quiet electric cars. That isn’t the case, as the GLC’s four-cylinder diesel started quietly and was barely audible at idle. That refinement is apparent on the move, too, where Mercedes’ suppression of the sounds from under the hood is very impressive indeed.

There’s been some crossover, here, with lessons learned from super-quiet EVs and their inherent need to reduce other noises, helping with the development of the internal combustion engine cars. The GLC is the first model in the Mercedes-Benz line-up to feature 2 millimeter-thick bitumen backed sheeting material fitted in the transmission tunnel, its effectiveness such that it has allowed engineers to remove other, heavier, sound deadening. The material is certain to be used in future new and replacement models within the Mercedes range.

There’s been some crossover, here, with lessons learned from super-quiet EVs and their inherent need to reduce other noises.

Our test vehicle rode on optional air suspension and rear-wheel steering system. So equipped, the rear wheels are able to turn by as much as 4.5 degrees to aid high speed stability and low-speed maneuverability.

The quiet isn’t just apparent from the powertrain, but also the road and suspension, which is superbly hushed on hard-packed, lumpy snow and ice. Naturally we drove on winter (not studded) tires in such conditions, and in a 4Matic model. As a result of both, traction was excellent.

As was performance. The 220d model’s ample torque, aided by that mild hybrid system and allied with Mercedes-Benz’s slick-shifting nine-speed automatic, meant the GLC felt brisk whether accelerating from standstill or on the move. 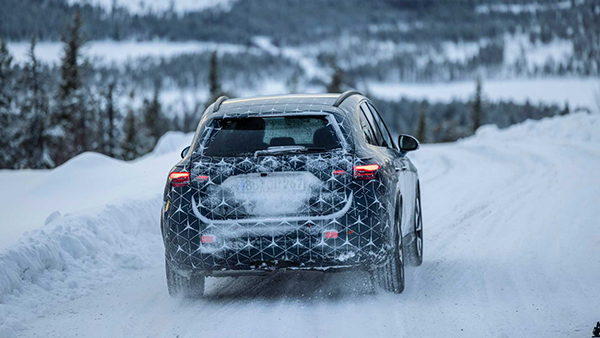 Take In The Tech
There are no figures to back up these impressions yet, but it’s almost inconceivable that the new GLC 220d wouldn’t at least match, and likely better, the 7.7-second 0-62 time quoted for its predecessor. Driving on a tight handling course, the GLC feels agile and composed, Comfort mode seeing all the stability and traction control systems effortlessly maintain progress, with Sport mode upping the allowance for slip and revealing the chassis’ fine balance, which should translate to an enjoyable drive on the road.

A longer ride in the passenger seat on the roads outside of the test facility only increased the overall impression of refinement and comfort. The time also gave us an opportunity to poke around under the covers on the dashboard. It’ll come as no surprise that the GLC shares much of its infotainment architecture with the new C-Class, which means a large 11.9-inch portrait-orientated center screen and a 12.3-inch screen for the instruments positioned in front of the driver. There’s also a new three-spoke steering wheel design which now incorporates touch controls.

Driving on a tight handling course, the GLC feels agile and composed. 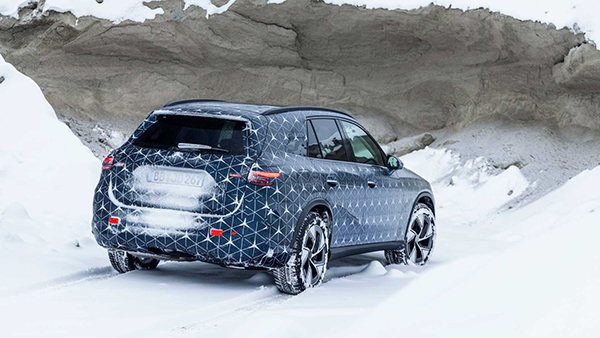 The hardware here uses the latest incarnation of Mercedes-Benz’s impressive MBUX (Mercedes-Benz User Experience) system, operated either by those wheel-mounted controls, the central touchscreen or by voice, using the command “Hey Mercedes.”

There’s an augmented reality feature in the navigation system, which allows house numbers to be virtually imposed on residences on the screen’s image from outside. But it’s one of those features which sounds useful in principle, but is a touch pointless in reality. What’s more useful is the system’s ability to display traffic lights on the central screen, which we’ve experienced previously on the road with the C-Class.

In the GLC, there are also off-road options to be found within a dedicated sub menu. The clever, optional, 360-degree camera gives a live view of the ground under the front of the car, which could help prevent grounding out if you’re taking your GLC somewhere tricky off-road.

Greater incorporation of safety equipment is, of course, part of the GLC’s new offering as well. Active Distance Assist Distronic (re: cruise control) can now operate at speeds up to 62 mph where it previously topped out around 37 mph. Features like Active Steering Assist, Traffic Sign Assist and the Intelligent Parking System have also been improved and will merit further review when we have time in the production car.

Additionally, if the optional Trailer Maneuvering Assist is specified it’ll now carry out cornering maneuvers up to 90 degrees – something it couldn’t do previously – making parking a trailer easier than ever.

Final, exact, details will be confirmed when Mercedes-Benz officially reveals the new GLC, but from our early prototype drive the GLC promises to retain its position as a big seller, with improved tech, driver aids, better economy, space and a sizeable electric-only range with the plug-in hybrids, all adding to its appeal.