Remarkably similar to BMW’s recent addition to the 7 Series range of powertrain options, the peeps at Mercedes-Benz have added a diesel and two plug-in hybrids to the GLC. The most affordable of the bunch is the 300 d 4Matic, which is rocking a 2.0-liter turbo diesel and all-wheel drive. 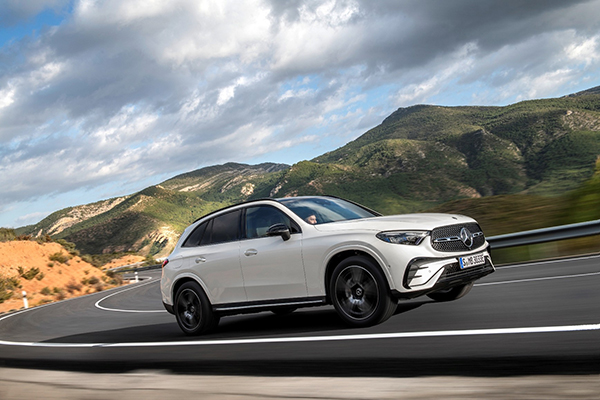 70,680 euros or 68,800 freedom eagles is the starting price of this fellow. The WLTP combined fuel consumption is estimated between 5.6 and 6.2 liters per 100 kilometers or 42 and 37.9 U.S. miles per gallon. Not bad for a compact-sized premium SUV, and the performance isn’t shabby either thanks to a mild-hybrid setup consisting of an integrated starter generator.

The ISG delivers up to 17 kW and 200 Nm of electrical support, numbers that convert to 23 horsepower and 148 pound-foot of torque. Codenamed OM654, the combustion engine cranks out 265 ponies and 406 pound-foot (550 Nm) from just 1,800 rpm in conjunction with the mild-hybrid tech.

Scheduled to start production this winter, the 300 d 4Matic will be joined by the 300 e 4Matic, a plug-in hybrid that employs a 2.0-liter turbo gasoline mill. Combined system output is rated at 308 horsepower and similar peak torque as the aforementioned mild-hybrid turbo diesel. The lithium-ion battery features a capacity of 31.2 kWh, which shames the 24-kWh pack of the original Nissan Leaf. Pure electrical output is 100 kW or 134 ponies, and the EAER city all-electric range is downright insane for a PHEV.

Mercedes-Benz quotes 119 to 130 kilometers (74 to 81 miles), an estimate that also applies to the slightly more potent 400 e 4Matic. The higher-performing version packs 376 ponies and 479 pound-foot (650 Nm). Even with the lithium-ion battery depleted, a full charge takes 30 minutes using the optional 60-kW DC fast charger. Top speed in all-electric mode for both plug-in hybrids is limited to 140 kilometers per hour (87 miles per hour).

Next spring, Germany and the rest of the EU will be treated to the 300 de 4Matic that combines the 2.0-liter diesel with plug-in assistance.