With this 300 e model, Mercedes has shown it’s capable of developing class-leading technology in the plug-in hybrid sector, while retaining that all-important focus on refinement. Plenty of rivals are more fun to drive, however, and with the firm pushing more towards the premium end of the market, the GLC’s pricing could be a tough pill to swallow. 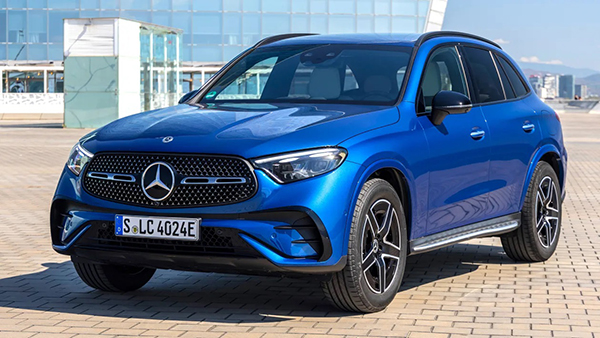 Plug-in hybrids might be losing out in sales to pure-electric cars (sales of PHEVs have dropped by 15.7 per cent compared to BEVs rising 48.8 per cent this year), but Mercedes is clearly confident there’s a big market for plug-in hybrid cars with the new GLC 300 e.

On paper, the new GLC looks like a significant improvement over the old model in all the key areas for a family SUV. There’s more boot space, extra equipment as standard and perhaps most significantly, a longer all-electric range.

While other markets will receive a more powerful 400 e variant from launch, in the UK the Mercedes GLC 300 e will be the range-topping petrol model until the AMG-developed 63 comes along next year.

The GLC 300 e’s powertrain is made up of a four-cylinder turbocharged petrol engine pumping out 201bhp and 320Nm of torque. In addition, there’s also a 100kW electric motor with 134bhp and 440Nm of torque – combining for a total of 308bhp and 550Nm. 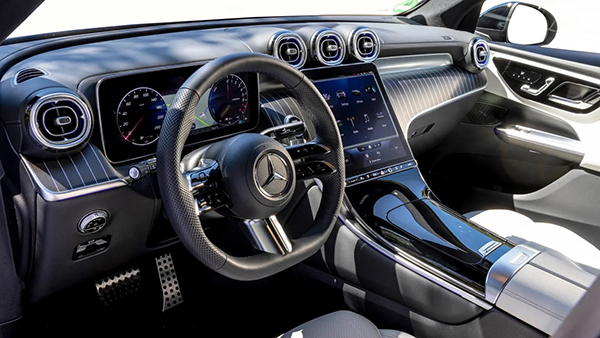 This is a little down on the GLC 300 e’s predecessor, which had 316bhp and 700Nm of torque, and the 0-62mph time has gained an extra second at 6.7 seconds. On the move however, the new car never feels slow.

The petrol engine delivers its maximum power between 2000rpm and 4000rpm and the electric motor does an excellent job of providing enough torque in the lower rev range to compensate. The whole system delivers a pretty seamless transition between hybrid, pure-electric or petrol power whatever speed you’re going. Meanwhile the GLC 300 e’s smooth-shifting nine-speed automatic gearbox serves up each gear without fuss.

There are several driving modes to choose from in the GLC. Pick Eco mode and you’ll find the GLC optimising the electric motor for lower-emissions driving. Sport mode makes the gearbox shift faster (you may want to use the paddles behind the wheel since the manual mode is surprisingly responsive), utilises all of the power from the petrol engine and electric motor and adds some weight to the steering. The model we drove had the optional 15-speaker Burmester sound system delivering faux engine noise to the cabin – it can be turned off but it’s one of the more convincing systems we’ve come across.

The GLC 300 e also has an Electric mode which makes the car run on pure-electric power at speeds up to 87mph. If you accelerate hard the petrol engine will kick in, however. Mercedes claims the 31.2kWh battery allows at least 62 miles of pure-electric running, with potential for up to 81 miles. A full recharge from a 60kW DC charger is possible in around 30 minutes. 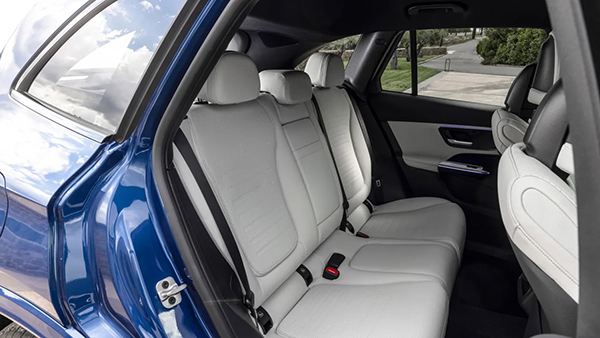 Whatever mode you choose, it’s clear the GLC has been developed for refinement and comfort over sportiness. Mercedes says it has taken sound deadening techniques from the S-Class to make the GLC quieter than ever. While we wouldn’t say it’s as quiet as its limousine cousin, the GLC is one of the most refined in the mid-sized SUV segment.

On the AIRMATIC air suspension, the GLC glides over bumps and ruts in the road. Sadly we’ll only get the standard passive multi-link suspension in the UK, but it’s a system that works well on the platform-sharing C-Class so we remain optimistic.

With 2,355kg to lug around, the GLC 300 e is a few hundred kilos heavier than its BMW X3 PHEV and Audi Q5 TFSI e rivals. However, if you’re gentle with your inputs, the GLC responds well in the corners with the 4MATIC all-wheel drive system providing a safe, neutral balance. There’s not much feedback through the wheel, but it does load up reassuringly through corners.

If you’re familiar with the latest C-Class, the new GLC won’t provide too many surprises inside. A brace of larger screens dominate the cabin, partly due to the excellent resolution provided by both. An 11.9-inch portrait oriented touchscreen sits in the middle of the dash with some key physical climate control beneath it and a 12.3-inch digital display sits in front of the driver. 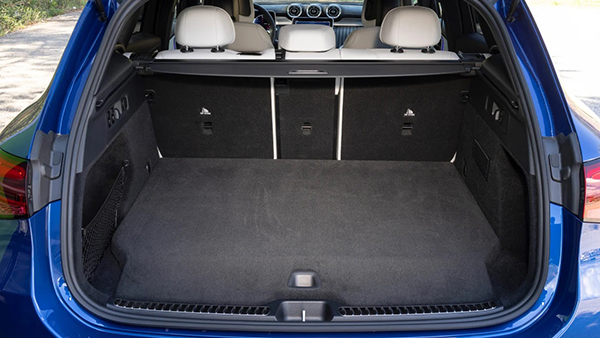 Both displays are crisp and clear, with the MBUX infotainment being one of the easiest and intuitive systems around. The positioning of the gear selector on the steering column frees up some space for a large storage bin in the middle of the dash. It’s topped with a piano black finish however, which could become susceptible to a few scratches given time.

The quality of the fit and finish in the materials are the best in this segment and it continues to the rear where there’s also plenty of legroom and headroom for adults. Matching the dynamics of the GLC, the faux-leather ‘Artico’ seats have soft bolstering designed more for comfort over sportiness, which is the correct decision.

Mercedes claims the non-PHEV GLC models gain an additional 70 litres of boot space over the previous model. Figures are yet to be released for the PHEV car, but we expect a smaller increase given the extra size of the plug-in hybrid system.

The range will consist of an entry-level Avantgarde model and a top-spec AMG Line version. The AMG Line trim level we drove featured some impressive optional extras, including a built-in fingerprint sensor for MBUX login, a 360-degree camera, a ‘transparent bonnet’ to allow for easier off-roading and a high-res head-up display.