For two years in a row, the Mercedes-Benz GLC has been the best-selling Benz globally. Now there’s a new model ready to launch for the 2023 model year – so all eyes are on whether Daimler can keep the special sauce that made the GLC remain a family favourite for Europe’s well-heeled SUV buyers.

The new 2023 replacement GLC swaps the charismatic six- and eight-cylinder engines for a bunch of hybridised fours, and a fully electric version is nowhere in sight. Last time we looked, premium was synonymous with more cylinders, more displacement, more power and more bling.

But the times are changing, and so are the priorities which define modern luxury. Key factors on the up-and-coming list are sustainable efficiency, concealed rather than ostentatious opulence and social acceptance. Read our Mercedes-Benz GLC review to see if they’ve hit the brief. 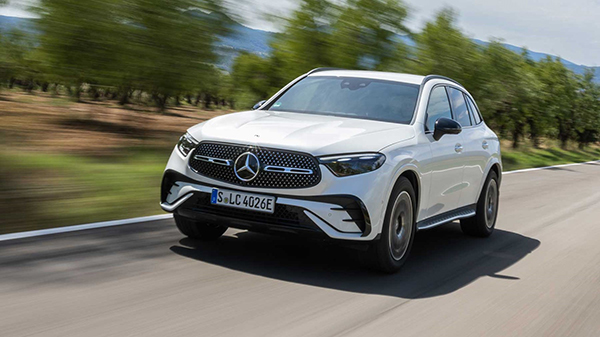 The new 2023 Mercedes-Benz GLC: what’s new?
Audi, BMW, Mercedes and friends support the new rules with different intensity and ambition, but almost every redesigned up-market model takes a step away from the period of overt abundance. Point in case is the 2023 Mercedes GLC which drops the straight six and both V8s in favour of seven different 2.0-litre four-cylinder drivetrains – and that’s before AMG will add three more small-displacement crackerjacks early in 2023.

The new GLC is a transformation tool designated to build a bridge from the old-school Mercedes world to the software and clean-air driven future which will one day climax in a super-safe self-driving environment promising total accident avoidance.

Interior specs
True to this philosophy, the new Mercedes GLC interior mixes classic high-end ingredients like wood and leather with digital mod-cons and more elaborate creature comforts. From the outside, however, the GLC avoids the swoopy lines, voluptuous curves and racoon-style EQ eye masks in favour of a mildly more aerodynamic, less adventurous design.

No combustion engine earmarked for the new bestseller can count further than four cylinders, but the base base petrol and diesel units were fine-tuned for quantifiably more go and grunt, along with further reduced emissions. That’s the good news.

The bad news concerns the dramatically increased prices which exceed the outgoing range by up to €10k in mainland Europe – and that’s long before you take a deep dive into the options pool. While the overall performance figures do not change much, the consumption is down by up to five percent.

The GLC 200d and 400d are no longer available, but customers can now choose from two petrol-fed PHEVs rated at 313 and 381bhp as well as the 300de which is good for 335bhp and a whopping 553lb ft of twist action. Standard equipment includes four-wheel drive and the nine-speed automatic across the board.

Where’s the electric Mercedes GLC?
Theoretically, this model should replace the ho-hum EQC which launched in 2019 but will be phased out next year when the pricier and more up to date EQE SUV arrives. From what we know, the proper zero-emission GLC is to be based on the new MB.EA architecture which bows in 2025.

Since the GLC rated here is due to run a full seven-year cycle, its battery-powered replacement may not see the light before 2030. At a glance, this looks like poor portfolio management, but don’t forget that the fully electric GLA and GLB are on approach for 2024, too.

And let’s face it: while the nationwide charging infrastructure is still patchy, PHEVs with a WLTP e-range of up to 95 miles should satisfy most commuter needs. Specifying the optional 60kW DC charger allows users to replenish the battery pack in only 30 minutes. The consumption in e- mode varies between 20.4 and 22.9kWh/100km. 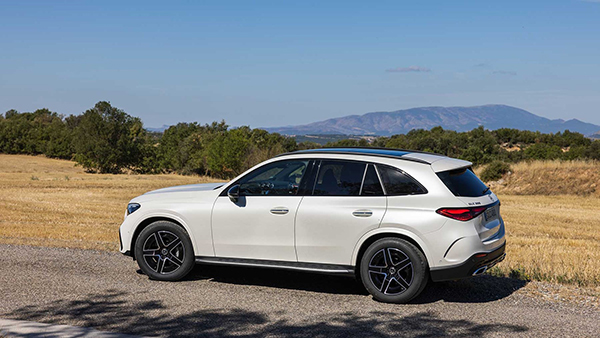 What’s the new 2023 GLC like to drive?
The mild hybrid dishes up 200Nm of on-demand bonus torque coupled to a 23bhp power boost. Put the foot down, and the helper battery will for a brief acceleration phase compensate the gain in weight over the previous model which can amount up to 150kilos.

The 204bhp GLC 200 and the 258bhp GLC 300 in particular are a little quicker off the mark than the GLC 220d and 300d, but it ́s the derv-drinkers which act more aggressively and with more vengeance while being about 20percent more economical. Since the diesel has dropped to the bottom of the social acceptance list, leasing is probably the most sensible option unless it’s a keeper.

What are the hybrids like?
The same verdict applies to the even pricier PHEVs which combine outlandish on-paper mpg results with impressive dynamics and range. The GLC 400e can for instance storm in 5.6sec from 0-62mph and max out at 148mph. The still to be announced prices may come as a shock though.

The mild hybrids feel more seamless and progressive than their plug-in stablemates. Dialing in Sport further sharpens the attitude, as does switching to manual mode and making full use of the back-up battery punch. In contrast, the PHEVs are somewhat more reluctant to respond to throttle orders, and the quite common stop-then-go-again sequence is intersected by a brief but oddly pronounced delay.

Although the 31.2kWh battery can never be fully drained, prolonged flat-out stints invariably inflate the consumption to previously common heights. Which is another way of saying that miracles don ́t happen unless the driver exercises restraint. And that ́s even more difficult than before because the new GLC is a better handling and more engaging piece of kit which boasts at the same time a further refined ride quality.

To edge key rivals like the Audi Q5 and BMW X3, the latest starship is available with unique features like air suspension cum ride height adjustment and rear-wheel steering for enhanced stability and manoeuvrability both on and off-road. Another forte is the broader range of assistance systems. The advanced parking aid automatically straightens the trailer when reversing, the steering self-actingly forms or follows an emergency lane to let recovery vehicles pass, the headlamps project warning symbols and satnav markings onto the road ahead, active cruise control knows how to swerve to the hard shoulder where the vehicle will stop, hazards flashing. 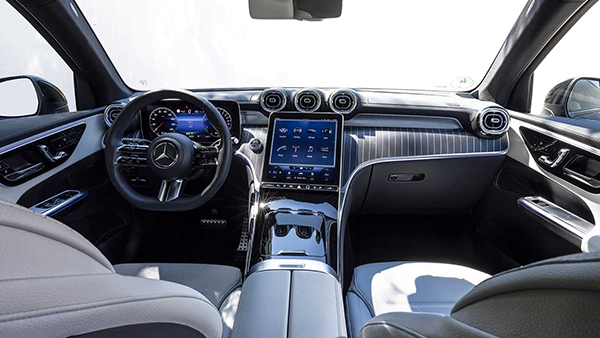 What’s it like inside?
The new GLC is ergonomically slightly less complex than S-Class and EQS. After all, it now takes only two fingertip stabs to deactivate unnerving vibrations, warning lights and chimes. Thanks to the Zero Layer approach, the favourite icons are always within a one-touch reach on the main monitor which either shows the full-frame sat-nav map or a momentarily relevant detail.

Since the MBUX voice control has over time attained best-mate status, haptic inputs are fast becoming smeary exceptions to the rule. This trend is accelerated by the hyper-busy four-spoke steering-wheel which displays tiny push buttons and numerous imprecise touch sliders. Since four cameras see more than two eyes, the main screen can alternatively display different on-the-move perspectives along with graphic helper symbols both of which may also be shown by the extra-cost head-up display.

Comfort, safety and quality are among the main Mercedes brand values. Especially in combination with sandwich glass, the exceptional noise insulation does indeed almost match the S-Class. Even in Sport and when fitted with 20in wheels and tyres, the Airmatic maintains a finely balanced compliance.

The multi-talented massage seats would be a welcome addition to any upmarket living room, but in the GLC we would appreciate a longer cushion and a less pronounced self-springing effect over emphatic undulations. Good for a top speed of 81mph, e-mode is also a real eye-opener off the beaten track where instant torque warrants an almost surreal momentum.

A car without faults? Not quite. When pushed, the GLC’s brakes soon feel somewhat mushy while the increasing pedal travel makes modularity less forthcoming. Still going ten-tenths, the body rolls and yaws and pitches to an extent which summons ESP here and there. Coasting is only activated when the black box deems the situation fit to do so, and the predictive sat-nav software is of the overly cautious kind which tends to irritate on the approach to a roundabout, traffic light or slow corner.

Mercedes-Benz GLC verdict
It weighs a tonne or two, costs an arm and a leg, and is only partly electrified. But the new GLC is roomy and nicely appointed, its ride is best in class, period, and the driving pleasure is more C-class inspiring than SUV-like ponderous. And it is a proper Mercedes – merely evolutionary rather than ground-breaking, yet competent through and through.