Today we’re taking a look at a few different G wagons! What a crazy vehicle that Mercedes has been making for more than 40 years. Love or it hate it, it’s an instantly recognizable icon. As such, it’s been given plenty of representations in 3″ diecast. What do you think about these? Do you have any other G-class models? Let everyone know in the comments below!

Kyosho VS Matchbox VS Tomica VS Majorette: Mercedes-Benz G-Class

So if you’re determined to build an impressive collection of scale model G-Wagens at home, searching for Hot Wheels products alone isn’t going to get you to that point. You’ll need to start browsing and find out what other manufacturers can bring to the table. Thank God, there are quite a few companies out there with huge portfolios, so it’s only a matter of time before something pops up. With that in mind, we began exploring the market in search of more answers. And you can use the information we’ve found to build up your collection as fast as possible.

Matchbox
As far as we can tell, there are four different G-Wagen castings available from Matchbox. We’d say that the first one is also the most exciting to keep on display, mainly because it’s not something you get to see every day. Mercedes-Benz introduced the G 63 AMG 6×6 almost a decade ago, and we know it as one of the most expensive models the company has ever built, with some selling for over $1 million these days. It took Matchbox a few years to come up with their scaled-down version of this beast, and the first iteration was a promotional item in Metalflake Bronze.

Right now, there are over a dozen variations of this casting on the market, but admittedly, some of them seem almost impossible to find. Prices for these range between a few dollars to $150 on eBay. And the good part is that some sellers have listed multiple variations, which means you can get up to speed a lot quicker. For some reason, Matchbox didn’t use this casting in 2022, and this is the first time they’ve put it on hold since its debut. Perhaps we’ll get lucky in 2023.

Next up, we’ve had a look at the ’15 Mercedes-Benz G-Class, which is based on the ’14 Mercedes-Benz G 550 that we’ll talk about in a minute. It comes as no surprise that Mattel had Ryu Asada working on this project, and it was released in 2018. There aren’t as many variations of this casting as we’ve seen with the G63 6×6, but the good part is that these also seem to be more affordable overall. Once again, this model hasn’t made an appearance in 2022, but at least the 2021 variation was part of the Matchbox Collectors Series. And you know what that means! This has premium wheels and rubber tires, similar to what you’d expect from a more expensive Hot Wheels model, too.

The third item on our list is the ’14 Mercedes-Benz G 550 we mentioned earlier. This made its debut in a Jurrasic World-themed pack. With six variations on the market in total, most of them are related to the dinosaur-focused franchise. Once more, a budget of about $100 should cover the cost of all the different iterations. If we had to pick one, we’d probably go for the black model that was part of the 2018 Jurassic World #3 Land Rescue Convoy. But for some reason, finding this set online isn’t as easy as we had expected.

Last but not least, we have to mention the 2014 Mercedes-Benz G500 Cabrio. This seems to be the rarest one so far. It was introduced in 2021 as part of the Matchbox Collectors series, and there are only a few other variations to look for. But most of those were intended for a Toy Show in Leipzig, Germany, and few were ever made. That means you could end up paying hundreds and hundreds of dollars to get your hands on them, but that sounds like a small price to pay for someone who’s on a mission to gather the complete collection. It’s worth pointing out that this casting was also used in the Moving Parts series, and that one features an opening hood. 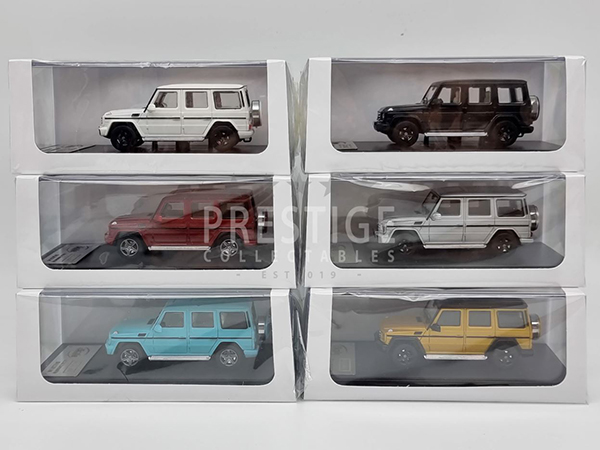 Welly
A few years ago, I happened to come across Welly’s version of the G-Wagen, and it’s not half bad! It might not be as good as a premium model from Mattel, but then again, in most cases, it won’t be as expensive either. This G500 even has a spare wheel in the back and painted headlights and stoplights. One thing you should consider is that this isn’t exactly a 1/64th scale, but a 1/60th scale.

Still, the difference in size isn’t noticeable if you’ll have it on display next to your Hot Wheels collectibles. We initially believed that the black version is the only one around, but some products listed on eBay are also painted in red or gray. It’s also worth pointing out that you’ll find larger replicas of the Mercedes-Benz SUV built by the same diecast manufacturer.

Majorette
While the Matchbox headquarters is located in the United Kingdom, Welly is a Chinese company. But Majorette takes us back to Europe, and more specifically to France. This manufacturer has been fighting hard to stay relevant over the past few years, and you’ll find quite a few interesting models in their lineup. Sticking to the topic of this story, let’s see what their G-Wagen portfolio looks like.

The first one to catch our attention was the Mercedes-AMG G63, which was also sold as the Brabus B63s in some cases. There are about a dozen variations for this casting alone, and some are on par if not even better than everything we’ve seen previously. But that comes with a price, and you might have to spend more than $200 to get all of these in one shot. $50 will provide you with a nice shortcut, as there’s a Color Edition set out there with five variations inside. It seems that this model was sold between 2017 to 2020, and it’s not quite clear if Majorette will bring up a new version in 2023.

The Mercedes-AMG G500 is another casting you should look for from the French manufacturer. It was first introduced in 2020, and there are five different variations on the market already. Neither one is particularly expensive, but the total cost of a G-Wagen-exclusive collection continues to grow. And while the G500 casting isn’t all that memorable, there’s one item left that’s bound to get your attention. Majorette first came up with the Mercedes-Maybach G 650 Landaulet in 2019, and you’ll only find three variations on the market. Each one might end up costing about $50, but with patience and good searching skills, you can find better deals than that.

Tomica
Most diecast collectors will tell you good things about Tomica, a company that is based in Japan. We’ve found five different G-Wagens in their line-up, and all of them are built at 1/62 scale. While these may be a bit more expensive than you’d think, there are a few perks. For one, these tiny SUVs have working suspensions and you can also open the doors. It’s not always as easy to find these in stores as you would with Hot Wheels cars, but then again, you can always look for them online on various markets or collector forums. There’s a strong chance that, once you start analyzing this brand, you’ll want to get more items with similar specs.

If you still feel the need to add more 1/64th-scale G-Wagens to your collection, you’ll be happy to know that there are a few more options out there. You can find about a dozen more variations over at Kyosho, another Japanese company.

Identifying all the G-Wagen replicas on the market might take a few days if you’re going at it by yourself, but knowing about the companies that have at least one of these in their line-up should be quite helpful.

So we recommend looking up other brands such as Almost Real, Schuco, Motorhelix, and Tarmac Works to name just a few. Of course, if you feel the need of having a unique model, you can always build one yourself or take the matter up with a custom diecast artist. Either way, as long as you have the time and money to get there, your 1/64th-scale G-Wagen collection has a good chance of being amazing.