That means that over the next few months, we will be challenging several track records while looking at some of the most interesting mods for the sim racing game created in Italy. That means we will be exploring cars, tracks, and perhaps even visual-enhancing upgrades as we wait for the arrival of Assetto Corsa 2. Although Assetto Corsa isn’t an open-world game, to begin with, like Grand Theft Auto, there are still plenty of huge tracks out there to explore.

Take, for instance, the Project Touge map that is 29.8 miles (48 km) long and will keep you going sideways for hours if you’re up to the task. There are even some tracks that are over 125 miles (200 km) long! For today’s test, we decided to test some cars that you wouldn’t normally think of racing in. It’s G-Wagen Month here on autoevolution, so let’s go hunting for Mercedes-Benz G-mods! A quick Google search will reveal about half a dozen different models, including a somewhat poorly-made G 63 6×6. But if you don’t fancy paying for AC mods, then you’ll have to settle for a short list of just two cars.

Brabus G900
The first one we came across was the Brabus G900 Rocket Edition. Even if somehow you’ve never heard of Brabus, it’s not hard to figure out that this is going to be one fast machine. So we thought we’d start here, given that we weren’t expecting a big SUV to be too exciting around the racetrack. The official name of this mod is slightly longer: “TGN Mercedes-Benz G900 Brabus 2020 by Ceky Performance 1050 hp.” Brabus built 25 of these cars in total, and they were all ready to deliver 900 hp and 922 lb-ft (1,250 Nm) of torque. Despite the weight, the German manufacturer stated that the G900 could hit 62 mph (100 kph) from a standstill in 3.7 seconds.

We decided to go with the classic black look, and we had already prepared a list of various tracks to experiment with. First off, we went on the Autobahn. Once you realize you need to be careful with your throttle input in first gear and second gear, you can put the pedal to the metal once you shift up again. The section of the German highway available with this mod is 18.6 miles (30 km) long, and you’re looking at two lanes in each direction.

By the time you’re ready to shift into the sixth gear, you’re already doing 150 mph (242 kph). And just before going into seventh gear, you’re at over 186 mph (300 kph). The funny thing is that this car will go all the way to 230 mph (370 kph), which sounds more than just unrealistic. After 10 minutes of driving on the Autobahn, it became a bit boring, and we moved on to the next track.

Black Cat County is a fictional road located somewhere in the USA that is 4 miles (6.5 km) long. You don’t even need to go all out around here, as it can even be fun to cruise around and admire the landscape while you’re doing so. It only took less than a minute to realize that you need to be extra careful with the brakes on the G900. 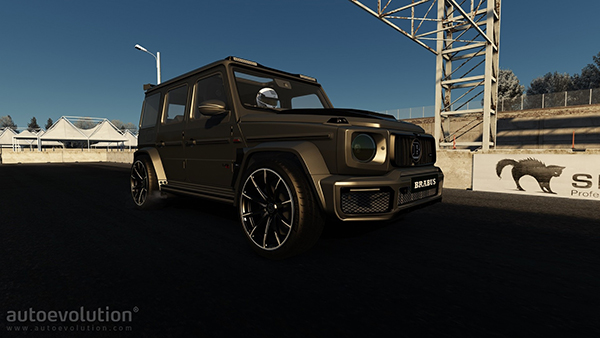 Going downhill at speed with all that weight isn’t exactly ideal. And if you slam on the brakes for dear life, you’ll lose control of the car in a heartbeat. The acceleration on this thing is impressive, to say the least, and you can end up approaching a hairpin at speeds of over 155 mph (250 kph). So try to keep in mind that the big Brabus is not a racecar and cannot defy the laws of physics.

That being said, stick to driving as if it were the real thing and you could crash at any moment. That way, you’re more likely to make it around the track. Next up we thought we’d try to see how fast it is over at the drag strip. With no cornering involved, all of our initial problems were bound to go away.

Needless to say, the G900 is fast. It only needs about 10.5 seconds to get to the finish line, with a trap speed of just over 149 mph (240 kph). Last but not least, we wanted to see how it would handle the Monaco Grand Prix. Ultimately, that’s where you would expect to see one of these rare machines. If you think you’re going to set a lap record with this car, think again. It will struggle with most corners, at least if you’re too optimistic with the gas pedal, that is. Alas, Mercedes-Benz didn’t build the G for high-speed cornering. So you can’t expect it to perform in this kind of environment, regardless of all the upgrades.

Mercedes-AMG G 63
The G 63 stats sheet reveals a maximum output of 631 hp and 900 hp. It also only weighs 2,777 lbs (1,260 kg), although you wouldn’t quite think that judging by the in-game experience. This time there are six colors to choose from, and we opted for Polar White. The artist that designed this mod goes by the name of Buja Gili, and you can find several other projects of his online.

Having driven the car for a total of 19 miles, we can tell you that the top speed is more than the declared 161 mph (260 kph). The G63 will go up to 192 mph (310 kph), and it can run the quarter-mile in a little over 12 seconds. One fun fact about this vehicle is that it’s running California plates, and it will also shoot flames out of the side exhausts.

The engine and exhaust sound aren’t as exciting as with the Brabus, and the car is certainly a lot slower overall. That doesn’t mean a Mazda MX-5 will be able to keep up with you in a straight line though. At least handling feels slightly better, and approaching corners at a high speed doesn’t feel as scary anymore. Still, try to avoid crashing it, as you might end up with a crooked wheel for some reason. This is the kind of bug that can often occur with a third-party mod, but there’s bound to be a way to fix the problem. In a way, driving the G 63 has reminded us of our RV tests, but with no concerns regarding length and width measurements.

Overall, this mod is slightly less refined than the Brabus, but under certain circumstances, it will still feel more realistic. There’s this one guy who even managed to set a fast lap of 7:24 around the Nordschleife, which sounds almost too good to be true. We suggest you try them both and see which one fits you best! In the meantime, we’re off to see what other racing games on the market will allow you to take a G-Wagen for a spin.