For the first time in four months, the Chevrolet Corvette has been knocked off podium position as the fastest-selling new car in America in May. It hasn’t been replaced by anything sensible, though. Instead, its slide to the number two position means the ascension of the Mercedes-Benz G-Class into the top spot.

That’s according to iSeeCars’ monthly ranking of fastest-selling cars in America, which found that buyers were interested in big luxury and small fun. The two fastest-selling new cars were joined by a third-place Cadillac Escalade, while the three fastest-selling used cars in May were the Mazda MX-5 Miata, the Tesla Model 3, and the Chevrolet Corvette.

The Chevrolet Camaro, Kia Stinger, the Porsche 718 Cayman, and the Porsche 911 came in 13th, 14th, 15th, and 18th position respectively and all sold faster than the average used car.

“Sports cars were a popular vehicle segment throughout the pandemic as a source of joy, and their popularity has continued as the country opens up,” said Karl Brauer, iSeeCars Executive Analyst. 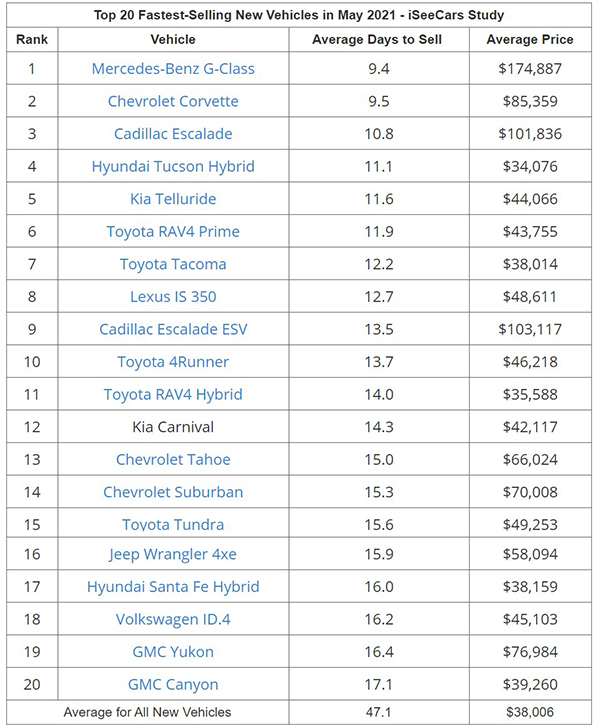 May was a month of contrasts, though. Along with the fun stuff came the big gas-guzzling SUVs. The top ten fastest-selling cars in May were almost all SUVs apart from the Corvette, though a few hybrid SUVs made it onto the list.

Widening the scope a bit and the counterpoint to the gas guzzlers becomes more evident. With vehicles like the Volkswagen ID.4 (18th fastest), the Jeep Wrangler 4xe (16th), the Toyota Rav4 Hybrid (11th), the Rav4 Prime (6th), and the Hyundai Tucson Hybrid (4th) all selling faster than the average new car in May.

On the used side of the equation, joining the electric Model 3 were the hybrid Honda Insight (5th), the Honda Clarity Plug-in Hybrid (19th), and the Lexus UX 250h. 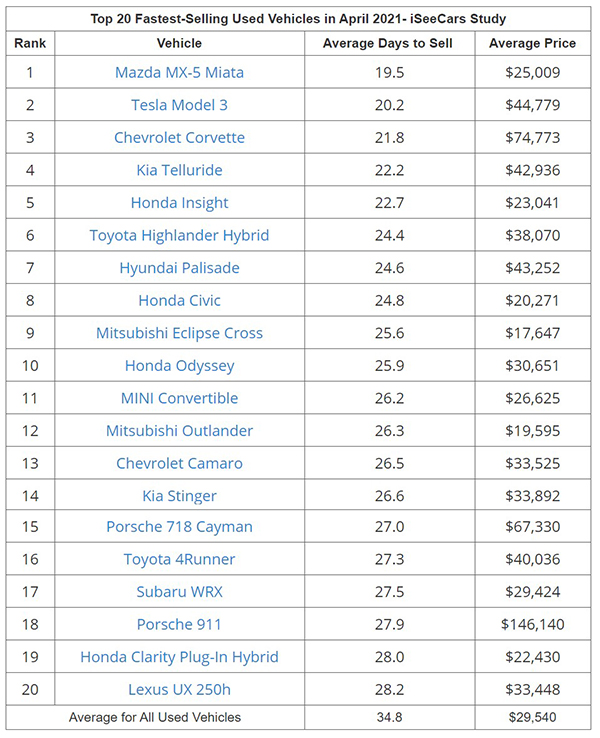 As customers continue to shop and inventories continue to dry up, we may see prices rise higher and time on lot shrink lower again in June.