If you’re looking to spend serious money on a luxury, all-electric SUV, then the Mercedes EQC is one to consider. Ride comfort and overall refinement are up there with its combustion-engined cousins, while there’s plenty of safety kit and on-board tech that help to justify the EQC’s rather steep asking price. 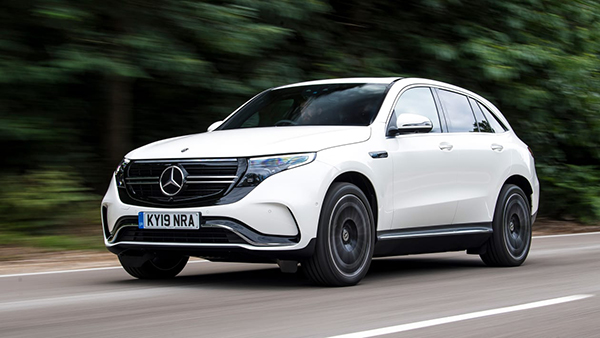 Interior space is a little compromised when compared to rivals and the EQC’s considerable weight takes away from the driving experience. However, the super-quick, straight-line pace certainly puts a smile on your face, and the usable electric range is good enough for us to recommend the car.

The Mercedes EQC is based on the Concept EQ, which was first shown at the 2016 Paris Motor Show. The SUV was the manufacturer’s first all-electric production vehicle and begins a move away from the internal-combustion engine and towards a cleaner, greener model range.

It may seem a little strange for Mercedes to kick off its electric revolution by introducing a big, heavy SUV, but it has a host of new battery-powered cars to launch over the next few years, and needs time to build profitable economies of scale with its smaller models. SUVs generally suit electric powertrains too, thanks to their tall shape that leaves space in the floor area for the batteries.

Instead of designing a custom EV platform, Mercedes has based the EQC on architecture used on the existing GLC model. Its Audi e-tron rival also shares parts with its Q5 and Q7 siblings, but other competitors such as the Jaguar I-Pace and Tesla Model X have been designed from the ground up on new platforms, which gives flexibility to maximise interior space and keep overall weight down.

Power for the five-door EQC comes from an 80kwh battery, with an electric motor at each axle. This set-up brings a useful total output of 403bhp, but more significantly there’s a huge 760Nm of torque instantly available from the first press of the accelerator. Of course, being a full electric vehicle, the EQC operates a single-speed automatic transmission.

Despite weighing in at almost two-and-a-half-tonnes, the EQC is capable of 0-62mph in 5.1 seconds and also maintains a claimed range of up to 252 miles on a single charge. 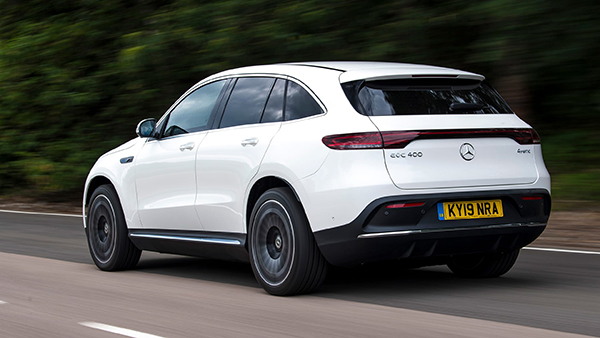 Prices start from over £65,000 for the entry-level Sport version, with the range building through AMG Line, AMG Line Premium and Premium Plus equipment lines. All cars are well kitted out, particularly with the inclusion of active safety systems such as Blind Spot Assist and Active Lane Departure Warning.

When you first drive an electric car, the most obvious quality is the instant acceleration on offer – from a standing start and also while on the move. All of the EQC’s considerable 760Nm of torque is available from the moment you press the pedal, so it’s capable of shifting along at a decent pace – even given the SUV’s hefty 2.5 tonne weight.
Driver involvement is a different story, as there’s precious little on offer. Toggling through the driving modes puts the adaptive dampers to work and can firm up the ride, but the changes are minimal and aren’t enough to disguise the weight issue and the rather numb steering feel.

On balance, the EQC isn’t supposed to offer hot hatch levels of handling, and customers will no doubt see comfort and refinement as being much more important attributes.

The EQC isn’t quite as adept at handling broken road surfaces at low speed as its Audi e-tron rival, although it performs better as you up the pace. It might well be an idea to steer clear of the biggest 21-inch wheels, as smaller wheels offer a better ride around town. 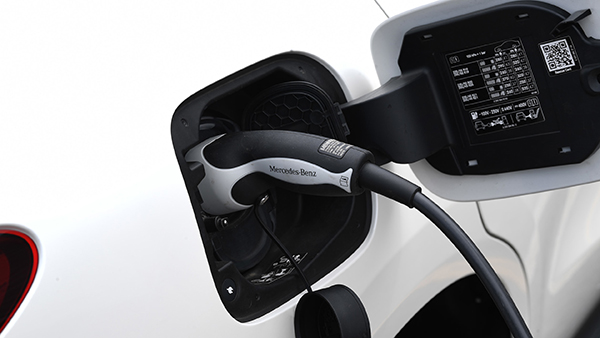 Engines
Mercedes’ first all-electric vehicle has an 80kWh battery powering two individual motors – one at each axle. The total power output is 403bhp which, along with the strong 760Nm of torque, enables the EQC to travel from 0-62mph in 5.1 seconds. Maximum speed is 112mph, which is about the current average for electric cars and helps to preserve battery charge and range.

During our own test of the EQC we managed the 0-62mph sprint in 5.2 seconds, but the more significant figures for real-world driving are the impressive 1.5 seconds it took to get from 30 to 50mph and 2.9 seconds from 50 to 70mph. In real world driving, it feels genuinely fast.

There’s no point in having a premium electric SUV with superb levels of comfort and refinement if you can only travel a short distance before having to stop and top-up the battery. Fortunately, Mercedes has this covered and claims a range for the EQC of between 248 and 252 miles on a single charge.

During our own test, the EQC returned 2.7 miles per kWh, so we think a more realistic range figure from the 80kWh battery will be around 216 miles.

Mercedes includes a Maximum Range mode for the EQC, which utilises the nav system and on-board cameras to adjust functions such as the regenerative braking system and actively restricts maximum available power – all in order to achieve the most miles. We think it’s a bit quirky, while the persistent electronic interventions can become a little tedious for just the smallest increase in range. Drivers would be better served by sticking to either Comfort or Eco modes.

The EQC can’t match the Audi e-tron’s quick charging capability and it won’t get close to the convenience of a Tesla Model X plugging into a Supercharger. However, topping up the EQC from 10% to 80% at a rapid 110kW public charging point will take just 40 minutes. 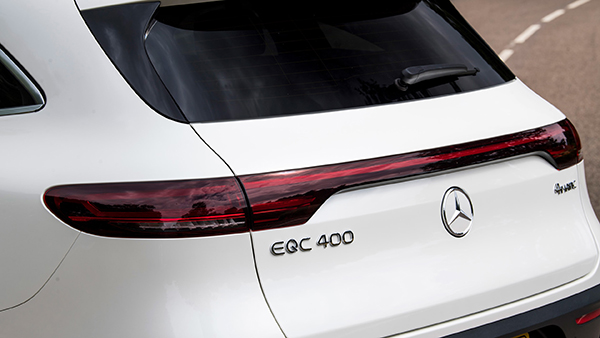 Insurance groups
Insurance premiums for the EQC are going to be expensive as all versions sit in the top group 50. Similarly-powered Audi e-tron models are also in group 50, as are Jaguar I-Pace variants.

Depreciation
EQC owners will be pleased that, after an average of three years and 36,000 miles of ownership, their luxury SUV will still be worth quite a bit as a used buy. Data suggests it will hold onto around 65% of its original list price after this time, which is a better return when compared to the circa 56% for the e-tron and I-Pace rivals.

The EQC sits on a reworked version of Mercedes’ GLC platform, and there’s more than a hint of the family relationship when you view the two side-by-side.

Inside, the cabin of the EQC is equally familiar, with the latest dual-screen infotainment and digital dial displays from Mercedes, along with a centre console and switchgear taken straight from the GLC.

Consequently, the interior of the EQC feels a bit conventional when compared to the electric SUV competition. There’s some redesigned air-vents, copper-coloured accents and a decorative panel of louvred lines running behind the dash, but that’s about it.

Moving up to the AMG Line versions brings 20-inch wheels, AMG-specific exterior trim and sports seats, while upgrading further to Premium and Premium Plus cars adds a further inch to the wheel size, a sliding sunroof, a Burmester premium audio system, Apple CarPlay and Android Auto smartphone integration and a head-up display among a host of other tech enhancements. 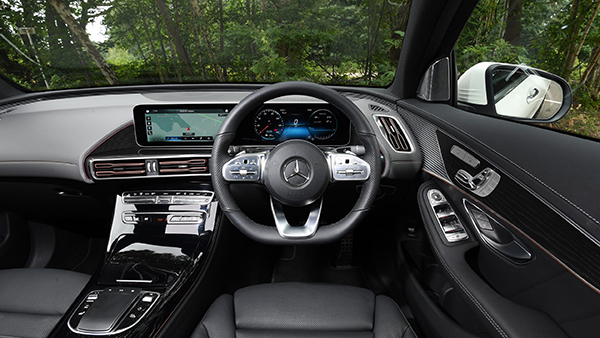 Sat-nav, stereo, infotainment
As ever, the infotainment presents a bit of a missed opportunity. The MBUX system is pinpoint sharp, feature packed and loads rapidly, but it’s a complex system to navigate – you may find yourself relying on the ‘Hey Mercedes’ voice control functions more often than you’d imagine.

The top-spec Premium Plus models include the MBUX Interior Assistant feature, which is able to detect and interpret your hand and arm movements so that you can activate selected functions more easily. The system is also capable of distinguishing between the driver and front passenger to help with more precise controls.

The EQC doesn’t offer as much interior space as its key rivals but there are plenty of storage options inside for everyday items and Mercedes has ensured there’s practical on-board tech, such as wireless smartphone charging and a head-up display, to help make journeys that bit smoother.

In terms of keeping the battery topped-up while on the move, the manufacturer provides the ‘Mercedes me Charge’ app, where either the nav system or the smartphone app can show the location, current availability and price of the selected charging station.

Customers can also take advantage of the manufacturer’s tie-up with the BP Chargemaster network and opt for home installation of a 7kW wallbox for around £500.

Size
The EQC is 4,762mm in length, which is slightly longer than its GLC sibling. Width, not including mirrors, is 1,884mm, with overall height at 1,624mm. The Audi e-tron is quite a bit longer at 4,986mm, while the Jaguar I-Pace is the shortest of the electric trio at 4,682mm. 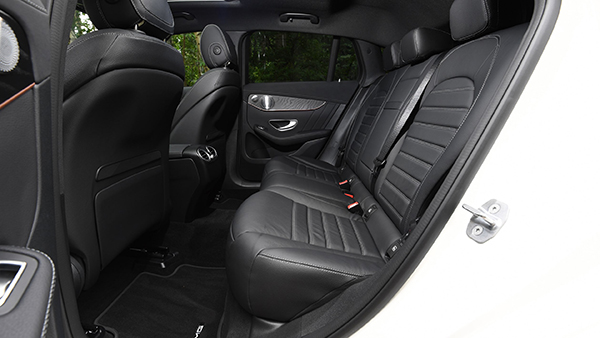 Leg room, head room & passenger space
Space upfront is good and those in the rear seats should have enough legroom. There is an issue with rear headroom, however. Considering the size of the SUV it’s pretty poor, and taller passengers will find their heads touch the roof.

Mercedes has clearly attempted to rectify the situation with a cut-out in the headlining that creates extra space above the rear seats, but it’s not enough. Compared to its competitors, the EQC feels darker and more confined in the back. 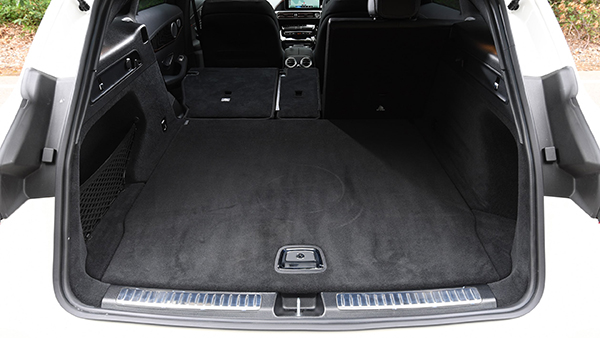 Boot
The EQC has a decent 500-litre boot capacity, although an Audi e-tron offers much more load space with 664 litres. The boot size increases to a more practical 1,060 litres if you fold the rear seats down.

The EQC is relatively new, but shares much of its architecture with the combustion-engined GLC, so we’d expect this to count towards it being reasonably reliable.

Equally, the EQC hasn’t been around long enough to feature in our latest Driver Power customer satisfaction survey, although Mercedes itself could do with some improvement, as it finished 28th out of 30 manufacturers in the 2020 poll. Customers cited high running costs as a key issue, while the infotainment systems could also be better.

Safety equipment is impressive across the range with Parking Assist, a rear camera, Active Brake Assist, lane departure warning, a blind-spot assist system and cruise control all offered as standard.

Euro NCAP tested the EQC in 2019 and awarded the all-electric SUV a full five-star rating. Individual category scores were outstanding with 96% for adult occupant safety and 90% for child occupant protection. Safety Assist technology was rated at 75%. 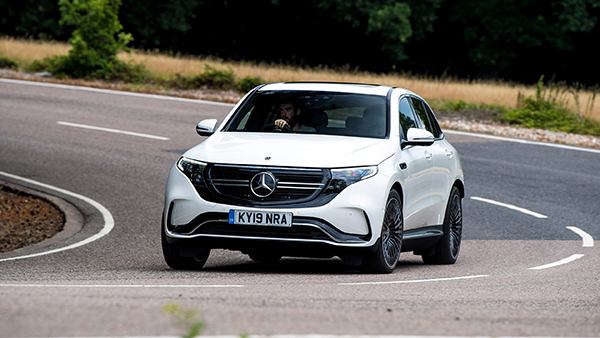 Warranty
Mercedes offers a standard three-year/unlimited-mileage warranty for all its new cars. The EQC’s batteries carry warranty cover for eight years, during which time Mercedes will also replace or refurbish the lithium-ion batteries if they fall below 70% of their as-new performance.

Servicing
Servicing intervals for the EQC are annually or every 15,000 miles – whichever comes first.