This Mercedes-Benz EQC is the mid-sized battery-electric CUV the automaker designed for the American market and debuted way back in early 2019 at the Consumer Electronics Show, planning to put the thing on sale here in 2020. It was no dice last year for obvious reasons. Then, come February of this year, Mercedes-Benz told Autoblog that “Following a comprehensive review of market developments, the EQC will not be offered in the United States for now.” Automotive News reports the EQC has a planned date for arrival in our lands, but it won’t be until “around 2025.” 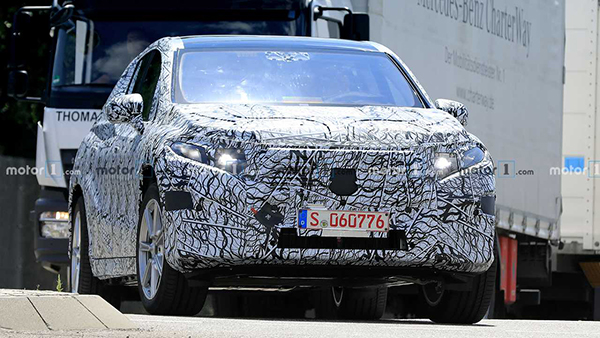 As disappointed as Mercedes dealers will be not to get a product they’d really like to offer, the delay makes sense. Mercedes-Benz USA CEO Dimitris Psillakis served up a bowl of truth when he told AN in May, “When you launch a new brand, you have to have the right products. We cannot come to the market with half-cooked plans.” The EQC could have looked partially uncooked on arrival. It’s based on the regular GLC with an internal combustion engine that’s been on sale for five years, currently Mercedes’ best-selling vehicle in the U.S. With the EQS electric sedan and its wow-factor hyperscreen headed to dealerships, the EQC interior might have been perceived as an unacceptably steep comedown even for a vehicle costing $34,000 less than the EQS. It makes more sense for the brand to lead with its best, on top of not wanting to disappoint a bread-and-butter crowd.

Furthermore, next year brings another tranche of dedicated electric crossovers that aren’t burdened by platform compromises, meaning the market would be moving further ahead of the late-arriving EQC. In it’s current form, the Mercedes uses an 80-kWh battery rated for 257 miles on the European WLTP cycle in top-tier EQC 400 4Matic trim, a range figure that could put it last in its competitive set of the Audi E-Tron, Jaguar I-Pace, and Tesla Model X in the U.S. The 2021 E-Tron gets an EPA rating of 222 miles on a charge, the I-Pace 234 miles, the Model X from 300 to 371 miles depending on configuration. Finally, Mercedes would be better helped selling every EQC it can build in Europe, where fleet emissions targets are challenging and penalties for missing targets are punishing.

AN says we can expect the second-gen EQC built on Mercedes’ new dedicated Modular Architecture for EVs. The new bones and technology will result in a better interior with more interior room compared to the current EQC, as well as more range and faster charging. Mercedes also told dealers it will bring its battery-electric C-Class sedan, sitting on the same architecture, to the U.S. in the same timeframe as the EQC.