Offering a wide range of engines and bodystyles has worked wonders for Mercedes in recent years, and that’s not about to change in the industry-wide switch to electrification. It won’t be long before the brand’s EQ electric range spans as many models as its petrol, diesel and hybrid line-up. And on this evidence, that can only be a good thing; the EQA offers 90 per cent of what our EQC does, for a fraction of the price. 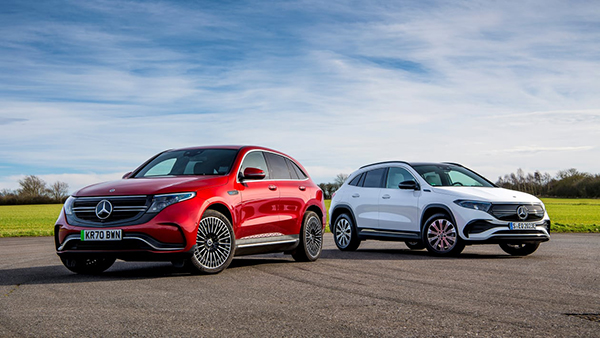 Mercedes is not a manufacturer to rest on its laurels. It’s a company that, over the past three decades or so, has invented entire model niches, sub-brands, and sporty spin-offs in an attempt to cover every corner of the new-car market.

As the world opened its eyes to electrification, Mercedes was at the forefront once again. As a result, it now offers mild-hybrid and plug-in hybrid powertrains across much of its line-up, with fully electric models already here too, and more on their way.

The EQC – a Jaguar I-Pace-rivalling SUV with a 250-mile range and room for five passengers – was the first, but Merc’s new EVs are arriving thick and fast. The flagship EQS is just around the corner, and the V-Class-bodied EQV all-electric passenger van has

So when I was recently given the chance to try the all-new Mercedes EQA on UK roads, it seemed the perfect opportunity to compare it side-by-side with my EQC. Is the GLA-based EQA no more than an EQC that’s been put on a hot wash? A cheaper, more compact version of my car, with less power, less kit and some smaller wheels? Or does it have something extra to offer?

First things first, the EQA doesn’t feel significantly smaller in the metal – inside or out. If anything, the packaging is more effective; there’s enough space for adults to sit comfortably both up front and in the back seats. Its boot isn’t as big, however; the EQA’s 340 litres play 500 in the EQC, although the difference is rather less pronounced with the seats down. 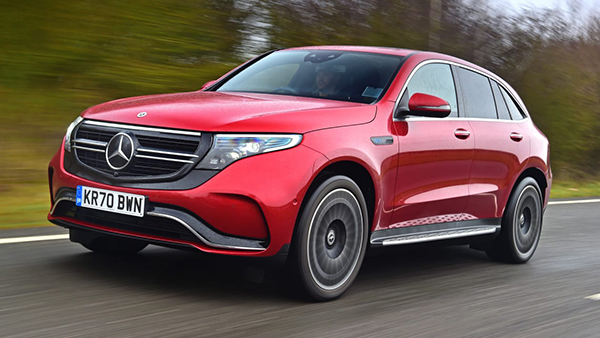 That’s one area that, to date, hasn’t impressed me with the EQC. This is a family SUV, yet its boot is almost completely filled by my daughter’s buggy – meaning that bags often find themselves on the back seats, or at my wife’s feet in the front. Thankfully, there’s space under the boot floor for the charging cables.

Sitting in the front of the EQA, Merc’s ‘hot wash’ tendencies are clear as day. The layout is almost identical to the EQC’s, and while some of the gloss black plastics have been swapped for satin trim, nothing feels particularly cheap or nasty. In fact, you’d expect a much narrower gulf in list prices than the £30k-odd difference as tested.

Performance is one area where you do notice the difference between EQA and EQC. With less than half the power, the smaller SUV (in entry-level EQA 250 Sport guise here) offers a more sedate driving experience. It’s quick enough, mind, and more powerful 4MATIC all-wheel-drive models have recently been announced should you want a bit more punch. We wouldn’t bother, though – the EQA feels lighter on its feet and more fun to drive than the lardy 2.5-tonne EQC. 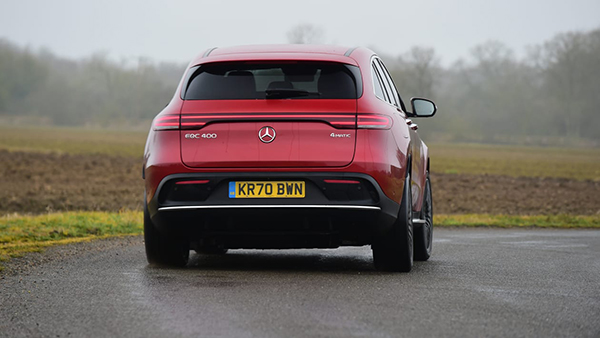 Then there’s the small matter of range. That lofty kerbweight has a dramatic effect on efficiency; through the colder months I was seeing as little as 2.0 miles/kWh in the EQC, though as the weather’s improved that figure has risen to around 2.6 miles/kWh on occasions – or 200-220 miles on a charge. And yet despite its smaller 66.5kWh battery, the EQA returns a similar real-world range.

All this may sound as if I’ve not yet gelled with the EQC, but in reality I’m loving how relaxing it is to drive. Whatever the journey, it’s a refined, capable and quiet family car with enough gadgetry to make even the most mundane trip a breeze. It’s funny the effect an EV has on your driving style too; I no longer feel in a rush to get anywhere.

And as we waved goodbye to winter, the EQC’s heated seats gave way to the ice-cold climate control and sliding sunroof – though I do wish Merc would offer a larger glass panel than the slightly old-fashioned letterbox opening on our car. Being able to pre-cool the cabin is a lifesaver, though, and an EV boon I wouldn’t like to live without. 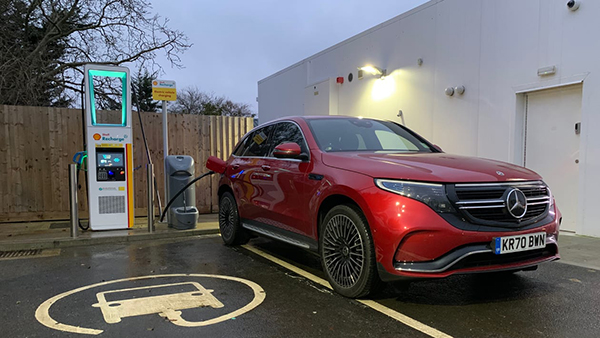 Regular readers will have seen my final report on my MINI Electric only a few weeks ago, but as the saying goes: out with the old, in with the new.

Since the MINI left us, I’ve welcomed the pricier, plusher, and more practical Mercedes EQC to our fleet. It’s still electric – a feature that goes with the territory for me as editor of Auto Express’ sister site DrivingElectric.com – but that’s where the similarities end.

As well as being all those things above, it’ll also do twice as many miles as the MINI on a charge. I’m getting around 180 miles at the moment – some way off Merc’s 252-mile claimed range, although I expect the weather is to blame. It’ll also charge more than twice as quickly as the MINI; the EQC’s 110kW capability trumps the hatch’s 50kW limit.

This 2.5-tonne SUV is the first electric Mercedes under the firm’s new EQ sub-brand. The C in its name aligns it with the petrol and diesel-powered GLC; the EQV passenger van is now on sale in the UK, and a GLA-based EQA has also been revealed. EQE and EQS models, among others, will arrive later.

Mercedes is all-in on electrification, then. But unlike Jaguar and some other makers, the German firm has shunned a bespoke EV platform in favour of adapted architecture from its combustion-engined cars.

In theory, while this method has benefits when it comes to cost and economies of scale, there are compromises to be made in terms of weight, space and practicality. We’ll discuss the pros and cons in greater detail in a future report.

But onto the specs – and the reason I’m clutching so much fruit in the image above. The EQC comes in either Sport or AMG Line trim, with the latter available with Merc’s familiar Premium and Premium Plus packs. Our EQC is the most expensive you can buy, with a list of equipment that wouldn’t look out of place on cars costing twice the price.

All AMG Line cars get LED lights, 20-inch wheels and leather seats, plus acoustic glass and an automatic tailgate. Keyless go, pre-entry climate control (a godsend in the winter months) and Merc’s MBUX infotainment system, with sat-nav and a reversing camera, are also included. 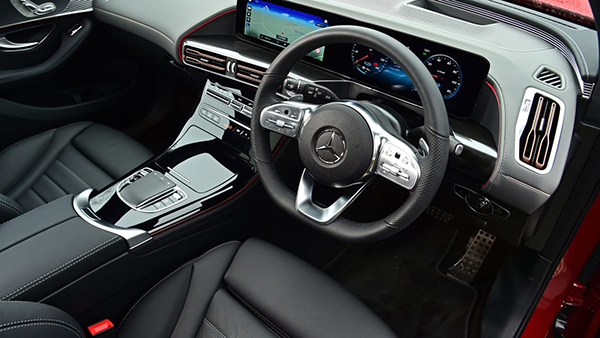 But herein lies the issue. The EQC isn’t a cheap car to start with; prices begin at £65,720, which is £23,470 more than an entry-level GLC 220 d. And yet to get essential pieces of kit you need to add pre-packaged equipment bundles – as if Tesco forced you to buy a pack of six Royal Gala apples when all you wanted was a single Granny Smith.

To get smartphone integration (wireless charging plus Apple CarPlay and Android Auto), for example, you’ll need to step up to AMG Line Premium – for an eye-watering £4,645. Doing so also brings the 21-inch wheels and sunroof on our car, plus augmented reality for the sat-nav – a feature that overlays arrows onto images projected from the front-facing camera, direct to the car’s central infotainment display.

Premium Plus brings everything listed above, plus the Parking Package with 360-degree cameras, a head-up display, and 12-way electrically adjustable seats for an additional £2,250 on top of the Premium pack price. The only other options fitted to our car are the Driving Assistance Package (£1,695) and the Designo Hyacinth Red metallic paint (£895).

The reason Mercedes and many other firms are beginning to operate this way is largely due to recent legislation. With the new Worldwide Harmonised Light Vehicle Test Procedure (WLTP) dictating what fuel economy or range a car is capable of, makers like Mercedes must test every combination of options before publishing its numbers. Packaging wireless phone charging with a sunroof reduces the admin – and associated cost – of testing time and time again.

My job, then, is to pick apart our EQC’s spec sheet and help you decide which option packs are worth the money and which you should ignore. It’s certainly going to be an interesting six months.