Mercedes CLE convertible and E-Class W214 with the classic grille without a central star.

After a series of leaks via spy shots and official hints from the three-pointed star marque, we now know that the all-new Mercedes-Benz CLE and next-generation Mercedes-Benz E-Class are in the works. Recently, both cars have been spied in a single video.

The cars are still in heavy zebra camouflage making it hard to see what Merc has in store for us with respect to the upcoming CLE and next-gen E-Class. Even the true profiles of the autos are distorted by what appears to be thick paddings beneath their wraps. The CLE in particular still has that flappy soft top as we have seen in earlier spy shots.

It should be noted that the CLE is a totally new range that’s poised to replace both the coupe and convertible models of the C-Class and E-Class. The CLE version in the video here is a convertible variant but we have already spotted the coupe versions of the vehicle in a post made two days ago. 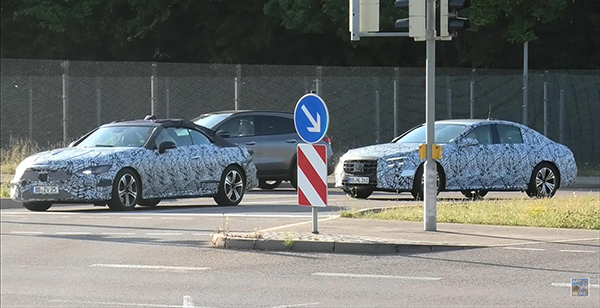 Meanwhile, the current E-Class is nearing its complete production cycle. The fifth-generation E-Class was introduced in 2016 so the prototype of the car here will be the sixth-generation version of it.

Both autos will likely benefit from the same 2.0-liter mild-hybrid inline-four engine found in the new C-Class. However, the power unit found in the CLE and the E-Class will most probably be tuned to a slightly higher level than that of the C-Class. Whether or not the two will get plug-in hybrid models remains to be seen, but this is a probable scenario.