The revised Mercedes E-Class is on sale in the UK now. Prices start from £39,055 for the entry-level E 220 d saloon, climbing to £61,540 for the range-topping E 400 d estate, and the first UK deliveries are expected to arrive in the autumn. 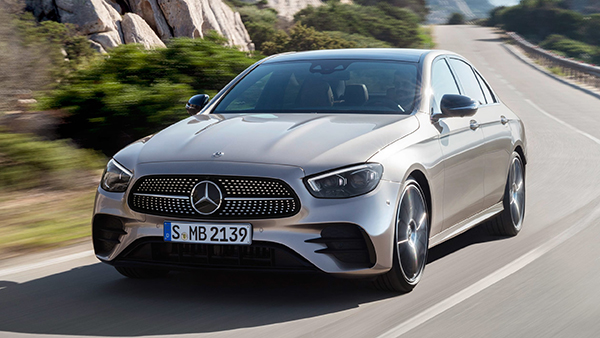 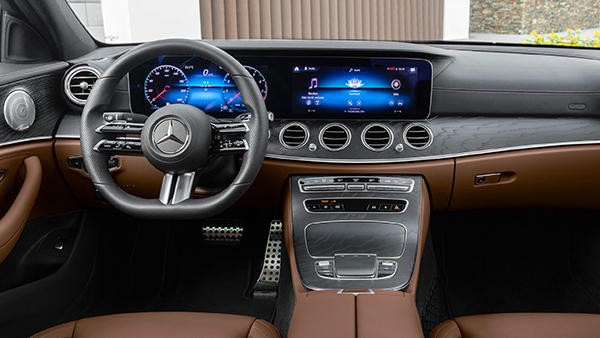 Inside, buyers get heated leather upholstery, an auto-dimming rear-view mirror, a wireless smartphone charger and a customisable ambient lighting system. Mercedes’s latest MBUX infotainment system is also fitted as standard, featuring two 12.3-inch screens – one to display the instrument cluster and another to handle navigation and media functions.

The E-Class AMG Line is priced from £41,555. Upgrades over the Sport model are minimal, stretching to a fresh set of 18-inch alloy wheels, new adaptive LED headlights and improved fog lamps. The interior upgrades are equally subtle; buyers get a new AMG steering wheel, an aluminium pedal box, a black roof lining and a three-zone climate control system. 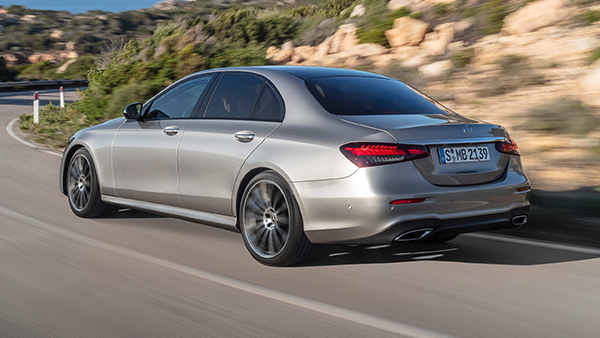 AMG Line Premium models are priced from £43,555. Tweaks over the mid-range model include 19-inch alloy wheels, an automatic powered bootlid, a 360-degree parking camera and an augmented reality navigation add-on for the car’s infotainment system which projects upcoming directions onto the windscreen.

As suggested by its name, the Night Edition also comes with rear privacy glass and gloss-black replacements for the car’s door mirrors, radiator grille, front splitter and window surrounds. Buyers have their choice of either 18-inch twin-five-spoke or 20-inch multi-spoke alloy wheels, too. 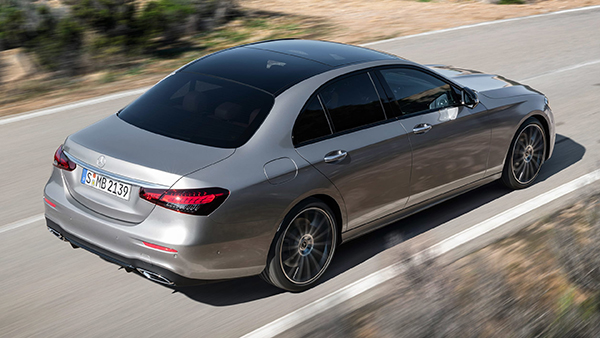 Facelifted Mercedes E-Class: engines and drivetrains
Buyers have their choice of six powertrains, with the standard E-Class line-up consisting of two petrols, two diesels and two plug-in hybrids. The entry point is a turbocharged 2.0-litre four-cylinder mild-hybrid petrol unit, with 194bhp and 320Nm of torque.

The engine is mated to a nine-speed automatic gearbox and offers a 0–62mph time of 7.5 seconds and a top speed of 149mph. Also, thanks in part to Mercedes’s improved 48-volt mild-hybrid technology, which is now lighter and integrated into the casing of the automatic gearbox, fuel economy stands at 38.7mpg.

Mercedes’ only other non-AMG petrol model is the £57,900 E 450 4MATIC. The powertrain features a turbocharged 3.0-litre V6 engine and a small electric motor, developing 362bhp and 500Nm of torque. The engine is hitched to a four-wheel drive system as standard and offers a 0–62mph time of five seconds flat. 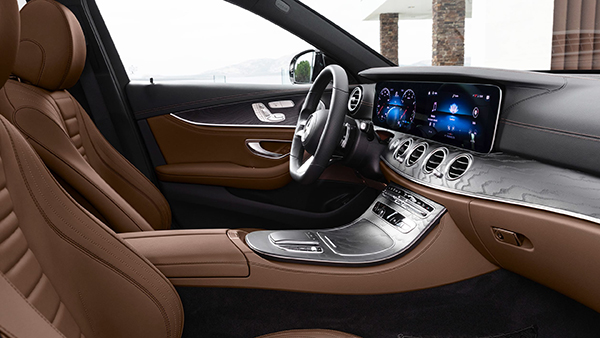 The diesel range kicks off with the E 220d. Prices start at £39,055 – for which buyers get a turbocharged 2.0-litre four-cylinder engine with 191bhp and 400Nm of torque. It gets the same nine-speed automatic as the petrol model but, due the extra torque, it has a better 0–62mph time of 7.3 seconds. More importantly, it returns fuel economy of a claimed 53.3mpg.

Mercedes’ range of clean-and-green E-Class PHEVs opens with the E 300 e, which carries a £46,330 price tag. Its powertrain mixes a 2.0-litre four-cylinder petrol engine, an electric motor and a 13.5kWh battery pack for a combined output of 317bhp and 700Nm of torque. 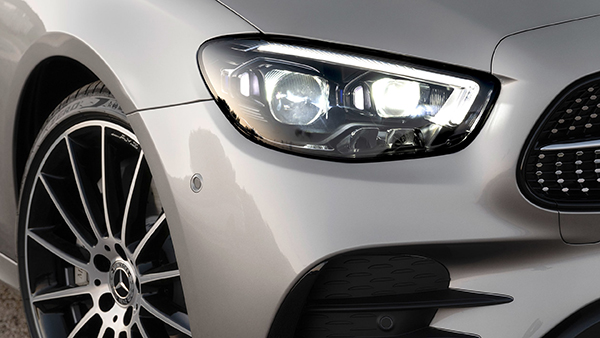 The performance figures are hot on the heels of the range-topping E 450, with a claimed 0–62mph time of 5.7 seconds and a top speed of 155mph. However, the main focus of the technology is efficiency rather than speed – and Mercedes says the E 300 e can cover 34 miles on a single charge and return up to 176.6mpg on the WLTP combined cycle.

Finally, the E 300 de PHEV starts at £47,480. It blends the firm’s 2.0-litre four-cylinder diesel engine with the same electrical architecture as the petrol-powered E 300 e, for a combined output of 302bhp and 700Nm of torque.
It’s slightly slower than its petrol-drinking sibling, with a 0–62mph time of 5.9 seconds – although it’s much more economical. Mercedes says the E 300 de will return between 217.3 and 235.4mpg on the combined cycle, while retaining the same 34-mile pure-electric range. 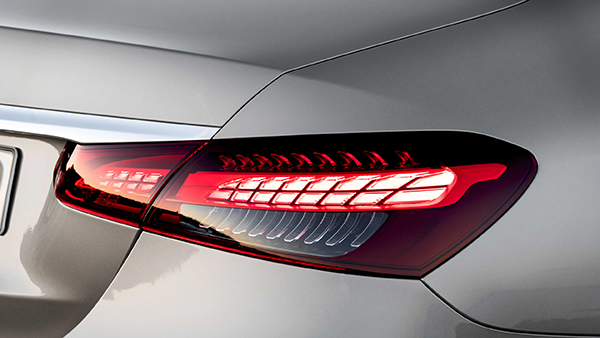 Facelifted Mercedes E-Class: tweaks and updates
The extent of Mercedes’s changes to the E-Class are extensive by the standards of a typical mid-cycle facelift. Styling tweaks are plentiful – the car’s front end is all-new with softer, reshaped lights, a new radiator grille and reprofiled bumper.

Changes at the rear of the saloon are just as significant. The old car’s rounded tail lights have been swapped for wider units, similar to those found on the A-Class saloon – while the boot lid has been given a slightly sharper upper edge. Revised lighting graphics aside, however, the back of the Estate looks largely the same as before.

Other minor details have been tweaked elsewhere. Among the new range of alloy wheel designs are a set developed with aerodynamic efficiency in mind, and there are three new paint colours to choose from: High-tech Silver, Graphite Grey metallic and Mojave Silver.

Inside, the overall dashboard layout is much the same as before. A striking new steering wheel design is the biggest change here – the split-three spoke design features more responsive touch sensitive buttons to control functions on the digital driver’s displays.

The steering wheel also helps with the suite of driver assist systems available to the E-Class driver’s disposal. While the previous semi-autonomous driving system required a wiggle of the wheel to make it clear that due attention was still being paid to the road, the new wheel is capacitive – so simply gripping the wheel now provides enough feedback.

Included among a wide range of driver assist systems is Active Speed Limit Assist, which adjusts the cruise control automatically according to traffic signs, bends and junctions, while traffic data sourced online will slow the car in anticipation of jams ahead, even before the driver or car’s radar can see them.