There are in this world modifications that can be made to a car to enrich the experience of driving it, and we must say, we like those. Then, there are the changes made for aesthetic purposes only, and most of them work just fine, so we’re cool with that as well. And finally, we have those types of changes that shouldn’t even be tried on diecast toys. Like, say, hellaflush.

The word hellaflush would be a term meant to describe, as per the Société de l’assurance automobile du Quebec (some say the term originated in Quebec), changing the “esthetic of a vehicle without regards for its handling.” In terms we can all relate to, that would mean dropping the damn thing as close to the asphalt as possible, and giving the car’s wheels the most outrageous negative camber allowed by physics.

The above two elements of the hellaflush movement are, undoubtedly, spectacular to look at once they come together (in most cases), but they both pretty much ruin the cars, and make them undrivable, at least in a truly safe manner. 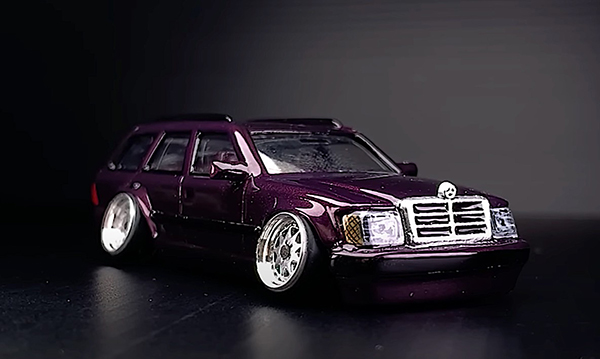 Because of its dramatic effects, hellaflush is not only present in the real world, but has quickly spread to include the world of digital designers doing their thing virtually and, most recently, as you can see in the video attached below, the world of diecast cars customizers.

The crew in charge of the insane transformation below is called Jakarta Diecast Project (JDP), and for the task at hand it selected a Majorette Mercedes-Benz E-Class Wagon S124, a recreation of one of the cars our parents loved to drive back the 1980s and 1990s.

You can see the entire transformation in the video below, and once you’ve reached the end, you’ll find a hellaflush Merc that looks simply hideous, and appears to be quite difficult to play around with.