Sound on! I have taken a new winter spy video of the next generation Mercedes-Benz E-Class W214 prototype during some tests near the Arctic Circle.

It’s only a matter of time before Mercedes-Benz debuts the next-generation E-Class. Internally known as the W214, there is a strong chance it premieres before the end of the year. That’s based on the first batch of spy photos wherein the car wore its production headlights and tail lights.

This time around, the test cars are wearing slightly less camouflage. Not only that, there were two versions of the seen driving around the Arctic Circle. One appears to be a higher-spec model, while the other might be a more basic version. The clue is in the door handles.

Last time out, the E-Class had flush door handles similar to the S-Class. That car still makes an appearance in this video, but the other tester has handles that stick out. It suggests that the pop-out door pulls are an optional extra. 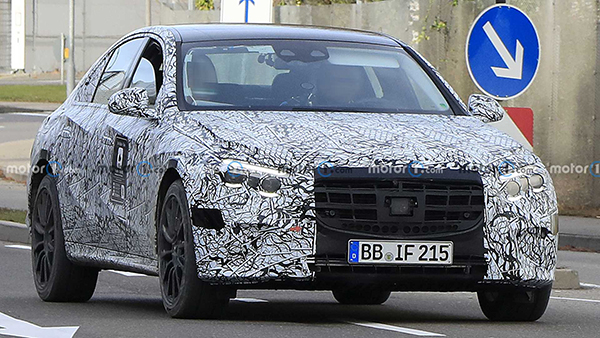 The video also gives a better look at the car’s flanks. Looking past the swirly camouflage, we see a few gentle sweeps by the lower section of the doors. Another part of the clip hints at turbodiesel power after the car spun its wheels and let out a loud rev.

What else can we expect from the 2023 E-Class? The car’s shape hints at an evolutionary redesign that follows the look of the S-Class and C-Class. After all, Mercedes-Benz is generally cautious when it comes to changing the look of its best-selling vehicles. Its interior could be similar to the S-Class when it comes to the large screens and digital displays. The infotainment is sure to get a significant software upgrade as well.

The engines will likely be a mix of mild-hybrid turbo gas and diesel options plus a plug-in hybrid. There are also reports that the AMG version will drop the V8 in favor of a boosted and electrified 2.0-liter four-cylinder mill. On the contrary, the turbocharged inline-sixes will remain per the same source.