Optimus Prime would probably say that this Mercedes E-Class Coupe was “a necessary sacrifice to bring peace to this planet,” or that “we’ve suffered losses, but we’ve not lost the war.” We’d only wish we hadn’t seen, yet it’s a little late for that. 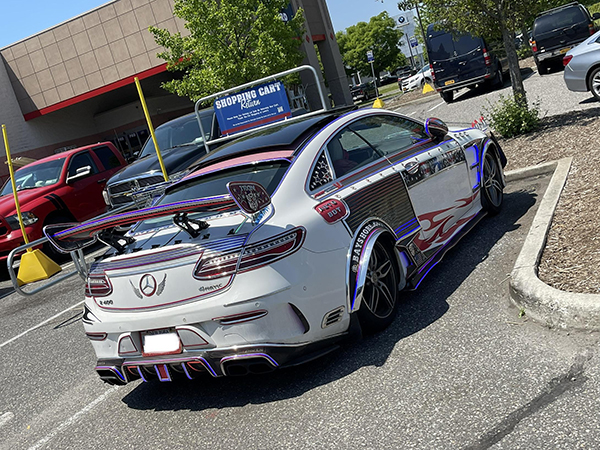 Sporting way too many kitschy add-ons for its own good, it has been shared in Reddit’s ‘ugly’ car mods thread, with the obvious ‘Transformers’ references and jokes. Honestly, the whole car is a joke, so let’s go through the things that have made it ridiculous.

First of all, it has a lot of chrome, visible pretty much everywhere. Custom over fenders, flames, stars and stripes, a whole bunch of attachments, and some LED strips from what we can see, as well as ‘Autobot’ lettering on the fuel filler cap contribute to the absurdness.

Then there’s that massive rear wing, which would’ve normally been the first thing to report on. There is also a lot of stuff going on below the bumper, on the much-too-aggressive diffuser. Wings flank the three-pointed star logo, which has received a custom surround. On the plus side, at least it doesn’t have any AMG badges, as the ‘E400,’ and ‘4Matic’ are the only ones that we can see.

Truth be told, it may very well be an AMG in disguise, as the bizarre makeover is enough to hide the things separating models born in Affalterbach from the usual Benz vehicles. Still, that doesn’t actually mean that it is an AMG, as in all likelihood, you’re looking at a normal two-door E-Class, which is part of the W213 generation that has been around since 2016. The C- and E-Class Coupe and Cabriolet models will be replaced by the CLE, presumably in a few months, with the first units understood to launch early next year.