Mercedes Prototype: E-class W214 series – is it the last generation with combustion engines?

The E-Class never suffered from the middle-child syndrome despite being sandwiched between the C and S. It has always had its place in the lineup, bridging the gap between the entry-level sedan and the traditional flagship. Come to think of it, the E-Class technically hasn’t been slotting in the middle of Mercedes’ lineup since the A-Class Sedan came out. There’s even an LWB derivative of the compact sedan, so there are a few models below the E.

Codenamed W214, the next-generation E-Class Sedan is making its spy video debut after seeing batches of photos in the last couple of months. The short footage shows a heavily camouflaged sedan caught on a rainy day in Germany being driven in front of an EQS and next to a cute Smart ForTwo. It already seems to have the full production body and lights, suggesting the premiere could take place before the end of 2022.

Despite the extensive disguise, it seems Mercedes won’t be rocking the boat in terms of exterior design. However, we do notice the E-Class is getting electronic pop-out door handles to mirror the S-Class and EQE / EQS while the lesser C-Class soldiers on with handles that stick out at all times. Speaking of the W206, it’s substantially longer and wider than its predecessor, which tells us the next E-Class is also due to grow in size to reinstate the size difference. 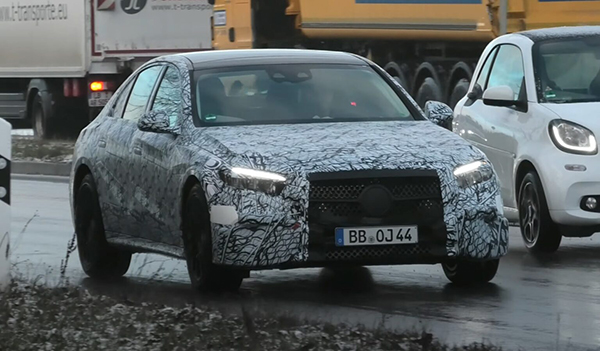 The taillights seem rather small, but that’s only because a good chunk of the rear clusters is tucked away behind the swirly camouflage. As was the case with the new C-Class, the most important change will occur inside the cabin where the W214 should get a vertical touchscreen to complement a standard digital instrument cluster. The current E-Class already has MBUX with the mid-cycle facelift, but its replacement is expected to get the more sophisticated infotainment.

Rather worryingly, a wild rumor from Autocar claims the next AMG E63 will also lose the V8 to mirror the upcoming C63. The boys and girls from Affalterbach are apparently planning to use an electrified version of the M139 engine for both high-performance sedans. It’s a turbocharged 2.0-liter four-cylinder engine from the compact “45” models, but with an electric turbo teamed up with an electric motor.

Oddly enough, the British magazine claims some of the six-cylinder engines will be retained. However, wouldn’t it be weird to have the full-fat AMG packing a smaller powertrain? Even if it will pack more punch, it just wouldn’t feel right. A more powerful, electrified inline-six seems like a better guess, but we’ll have to wait and see.

The revamped E63 is likely to arrive at the end of 2023 or early 2024. If the rumor mill is accurate, it’ll be the last time Mercedes will sell an AMG E63 since the body style altogether will be dropped by 2030. Not just for the AMG, but also the Benz model and its rugged All-Terrain sibling. The same goes for the smaller C-Class Estate and its high-riding equivalent, while the CLA Shooting Brake will die even sooner.