Jag talks with Ralph on his ownership and track experience with his S212 E63 AMG (M157) Wagon! its your love of cars, your own goal of going fast, improving your car control, becoming a better driver, building relationships or just having fun.

Why the Mercedes-Benz E63 AMG is the all around track monster!

Even a decade later, the practical, fire-breathing wagon delights its owners – and enthusiasts.

Depending on your home situation, life may not let you have an SL convertible or that C4 Corvette you’ve been eyeing. The denial-anger-bargaining-depression-acceptance cycle is something we enthusiasts endure when our family needs veto the possibility of getting the car we want.

But along came the group out of Affalterbach that gave us a gift of a fun, even track-ready, practical daily driver.

In a video from Track TestedMotorsports, the owner of a one-of-209 2012 Mercedes-Benz E63 AMG Estate, Ralph, glows about its powerhouse, which is one of the best the Tri Star has ever made: the M157 5.5 liter twin-turbo V8 cranking out 550 horses and a staggering 590 lb-ft of torque. He admits that despite it being his daily, he has tracked the wagon a few times. Can we blame him? 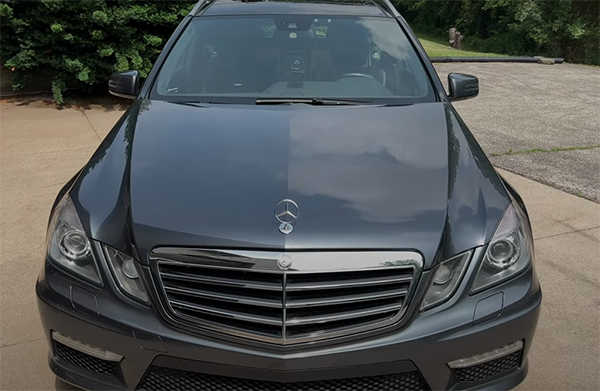 Like Fine Wine
It’s amazing to see how well the wagon has aged, too. Some tech snobs might scoff at the tech in a car from 2012; Apple CarPlay was several years off and, and many OEM infotainment systems from this era are about as fast as the iPod you rebooted after two years of sitting beneath drawer fodder. But the E63 wagon’s tech is surprisingly with it for an old-timer: high-beam assist and a suite of driver assistance features are just some goodies that many drivers would love to have in their cars today. And Ralph raves about the seats: they have active bolstering, which inflates or deflates whichever side of the seat needed to keep you planted during hard cornering. Oh, and they are heated, ventilated and have a massage function.

Its practicality and tech are complemented by its stealth; its unassuming looks will lead the average person to believe it’s merely the boring luxury car their dentist drives. Even its Steel Grey Metallic factory paint job doesn’t remind them of anything other than it’s sort of like the color of their apartment neighbor’s GTI. But those who know, know. One look at the badge, or hint of the exhaust note on the street, and enthusiasts know it’s the fire-breathing, RWD track weapon variant with an elongated boot so you can fit the stroller, toys, dog pen and even the dessert tray you’re bringing to your mother-in-law’s.

Sure, you can say it’s a sleeper, but that’s like saying a Japanese A5 Wagyu steak tastes great; you would be doing a rare, incredible creation no justice, kicking the pedestal from which it sits, high above its cohorts.