This 1978 Mercedes 300CD gets its first wash in 10 years and a full disaster detail in preparation to sell on the MB Market. I fly down to Myrtle Beach to meet with Rusty from Diamond Back Classic Tires who gives us a tour of their amazing facility. After we learn about the manufacturing process of whitewalls, we check out the 300CD and 250TD which need a lot of love to get back on the road. After getting both diesels started, I strike a deal to clean up both of these beloved Benzes and get them to a new home. Back at the AMMO Studio, it’s an intensive detail to get the 300CD ready for it’s auction on the MB Market. The before and after is totally worth it as the 300CD gets a nice flurry of bids towards the end of the auction. Super excited to get this 300CD back on the road and pay tribute to the enthusiast owner.

Ammo NYC is a YouTube channel that does complete detailing work. And when I say complete, I really mean to the last detail. In the latest episode, Larry is called to Myrtle Beach to meet up with a buddy who works in a tire white walling facility.

After his buddy explains how the facility works, he brings Larry to two cars hidden behind stacks of tires – a 1978 Mercedes 300CD and a Mercedes 250TD wagon. Both are covered in mud, spider webs, and animal footprints. The facility’s owner was passionate about diesel Mercs, but he sadly passed away this year, and the estate was looking to clean them up and sell them.

After checking the engine fluids and installing new batteries, the guys had no problem making them start. They might be old and dirty, but these vehicles were made to last. For instance, the 300CD can reach over one million miles (1.6 million km) while running with the original head gaskets. The model you see in the video has around 100,000 miles (160,000 km), so the car has a lot of life left in it.

The next step is bringing the cars to Ammo NYC’s studio, and that’s when the complicated part starts. Even though it’s been sitting outside for many years, the 300CD is still in good condition.

After lifting it, we discover that the undercarriage is full of mud and dirt. Using a pressure washer and tons of soap, he removes probably pounds of soil from all parts of the car. Detailing is a time-consuming craft, so you must be patient. A critical tool is the air compressor, which you must use to remove junk from the tightest spaces.

Larry also cleans the engine and its compartment after covering the fuse box and continues the process by polishing the paint. There’s already a massive difference in how it looks. 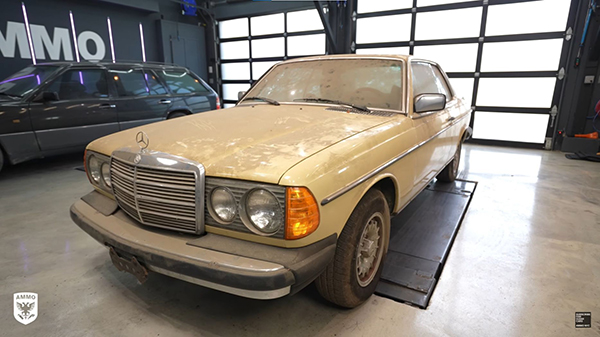 Moving on the wheels, he gives them a deep wash, and they turn out shiny, looking almost like new. As a homage to the late owner, he adds some classy white wall tires.

After finishing up the last touches on the exterior, such as polishing the chrome pieces, he moves on to the interior, which is moldy and full of sand, but at least it’s not mice infected. Severe sun exposure also discolored and cracked the leather seats, but a specialized team was called to repair and repaint them.

The interior took lots of washing, brushing, scrubbing, and steaming to regain its original appeal. The last step is adding paint protection, waxing, and glossing exterior elements, then thoroughly cleaning the glass. The result is impressive, as the Merc looks like new. I won’t spoil the surprise, check it out in the video below.

The owner would’ve been ecstatic to see his car looking so clean and fresh, but now someone new will be just as happy to take care of this 300CD. Larry ends up putting the car up for auction, and days later, it’s sold for $12,250.

In our overly consumeristic society, it’s always nice to see something old that’s reconditioned. It takes lots of energy and time, but the outcome is guaranteed to put a smile on your face, at least if you’re into older cars. Fantastic work from Ammo NYC, as always, and we look forward to the next Disaster Detail video.