The new Mercedes-AMG C 63 says goodbye to V8 and hello a 2.0-liter four-cylinder with F1 tech, augmented by a separate electric motor on the rear axle, with a combined output of 670 PS (661 HP)

A few prototypes of the all-new Mercedes-AMG C 63 were spotted recently doing the usual rounds on the Nurburgring, and even if it isn’t the first time we see it on video, we are still baffled by its very quiet nature.

Said to have some F1-inspired technology, which hasn’t been confirmed at this point, the 2023 Mercedes-AMG C 63 ditched the sonorous V8, with a 4.0-liter displacement, and twin-turbocharging, for a 2.0-liter four-cylinder unit, with forced induction.

The ICE is shared with the ‘45’ series models and was tuned to kick out 470 hp. Backing it up is a 201-hp electric motor, mounted at the rear, and the total output is rated at 670 hp (680 ps / 500 kW), with a combined 553 lb-ft (750 Nm) of torque available via the right pedal. The clever packaging, and the fact that the 2.0L unit is lighter than the old V8, should help the sports sedan (and wagon, because the C 63 Estate is also coming with identical configuration) handle better. 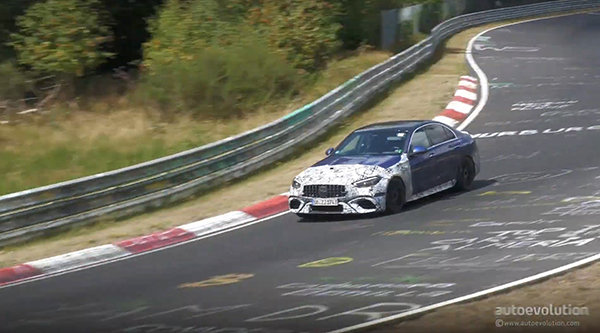 Disappointing sound aside, the 2023 C 63 has four exhaust tips, apparently one for each cylinder of the engine. This is one of the design traits that will help it visually stand out next to the lesser models, alongside the Panamericana grille with vertical slats, swollen fenders, beefier front and rear bumpers, AMG badging, and exclusive wheels.

It shouldn’t be long until the Affalterbach brand’s rival to the likes of the BMW M3 and Audi RS 4 premieres, with the debut being probably a few weeks or months away. In all likelihood, the first units of the car will start arriving at dealers in selected markets not long after the grand unveiling.