The next AMG C63 losing its V8 for an electrified engine with half the cylinders is yesterday’s news, but a new report from Car Magazine offers fresh details about the already much-criticized hybrid powertrain. Mercedes will allegedly be using the same 2.0-liter four-banger from the AMG A45 with an electric twist by adding an integrated starter-generator (ISG) and a rear-mounted electric motor. 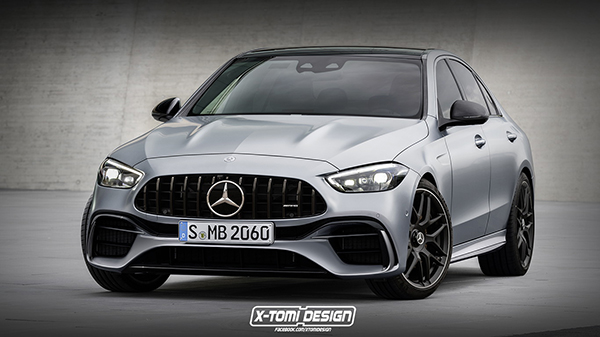 Set to make its way to Euro dealers later this year and to the U.S. in early 2022, the brand’s new premium compact car will be topped by the C63 models – assuming that they will retain their predecessors’ nomenclature, as they are expected to have a turbo-four.

That’s right, for the first time in the C63’s history, it will not get a big lump under the hood, but rather a turbocharged four-cylinder engine meant to keep the emissions in check. Believed to be the 2.0-liter unit powering the ‘45’ series, it will get electric assistance, so it might produce well over 500 HP, unlike the regular mill that pumps out up to 415 HP in cars such as the latest A45 S hot hatch.

So, what will it look like? In all likelihood, similar to this rendering made by XTomi, who used the bigger E63 Sedan for inspiration, making a few changes to the front end that now sports the Panamericana grille with vertical slats – an AMG signature design of their modern vehicles.

The front bumper was reshaped and now features bigger side air intakes and a discreet apron between them. As for that small crease in the front fenders, it will host a special logo on the production model, similar to the E63. The two tone finish and different wheels complete the design.

The new C63 is probably due towards the end of 2021 or sometime next year.