It didn’t really draw too much attention, but it was definitely one of the hottest debuts at this year’s edition of the Goodwood FoS.

Mercedes introduced the AMG C43 sedan and wagon at the end of April, but the hotter C63 is right around the corner. In fact, the flagship C-Class from the W206 generation was hiding in plain sight at the 2022 Goodwood Festival of Speed. Granted, the near-production prototype was fully camouflaged. That being said, the “E Performance” livery we also saw on the AMG One hypercar wasn’t hiding much.

Take for example the fuel cap on the rear fender on the driver’s side. It doesn’t lead to a gasoline tank, but rather to the charging port to feed the 6.1-kWh battery. Yes, unless you’ve been living under a rock for the past few months, the new C63 will be a plug-in hybrid. It’ll also lose its V8 and rear-wheel-drive configuration for a 2.0-liter engine and AWD.

It does look more aggressive than the C43 by eschewing the faux front air vents in favor of functional ones along with a slightly larger lower air intake opening. The angular exhaust tips replace the round ones of the AMG Lite version and appear to have a slightly larger diameter. That trunk lid spoiler doesn’t seem bigger, but maybe that’s for the better. 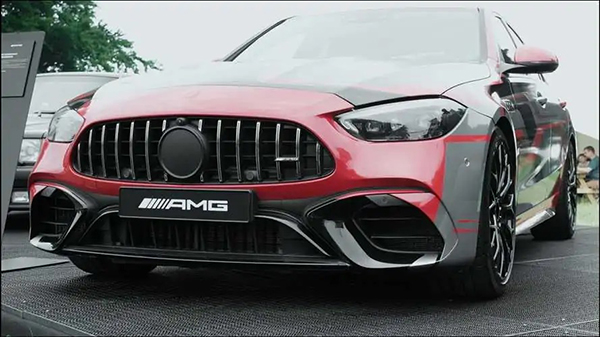 Looking at the sides of the car, the front fenders incorporate what appear to be faux vents and the prototype was rocking some beefy brakes with red calipers behind those 20-inch wheels wrapped in Michelin tires. The stiff suspension setup is obvious given how low the AMG C63 sits to the ground, which is a similar case to the lesser C43.

According to the short technical specs sheet positioned next to the car at the Goodwood FoS, the AMG C63 will indeed have 670 horsepower and 750 Newton-meters (553 pound-feet) of torque as previously reported. That will come from a longitudinally mounted 2.0-liter four-cylinder engine borrowed from the “45” cars – where it’s installed transversally – and an electric motor sitting at the back. The downsized combustion engine is 107 pounds (48.5 kilograms) lighter than the old M177 V8, and overall, the powertrain is still lighter even after adding the hybrid-related hardware.

The official premiere of the new Mercedes-AMG C63 is expected to take place in the coming months. Much like has been the case with the C43, our money is on a double reveal as the wagon will likely be unveiled at the same time. If recent reports are to be believed, there won’t be C63 Coupe and C63 Convertible models anymore as the two-door C-Class and E-Class models will morph into a CLE lineup, complete with AMG power.