Sound on! I have taken a new spy video of the next generation Mercedes-AMG C63 during some hot laps on the Nürburgring and on the public roads around it. Several prototypes of the C63 are trying to hide the new sound of the downsizing four-cylinder Hybrid. Please do not expect too much from the sound, because unfortunately it is no longer comparable with the current C63 and rather disappointing.

The new generation of the premium compact sports model developed in Affalterbach has been in the testing phase for quite some time now, and we’ve seen it in both body styles, the Sedan and Estate, in all sorts of environments. The latest sighting included the long-roof variant, which took on the Nurburgring sounding like a glorified A 45.

You see, while its predecessor had a twin-turbo 4.0-liter V8, the 2023 Mercedes-AMG C 63 will have an engine half that size. The 2.0-liter unit, with forced induction, is believed to have been sourced from the ‘45’ series, and since it’s not C 63 worthy with the rumored 450 hp, it will be backed up by an electric motor, generating in the region of 200 hp, or so it is believed anyway. The total output is understood to be rated at around 650 hp. 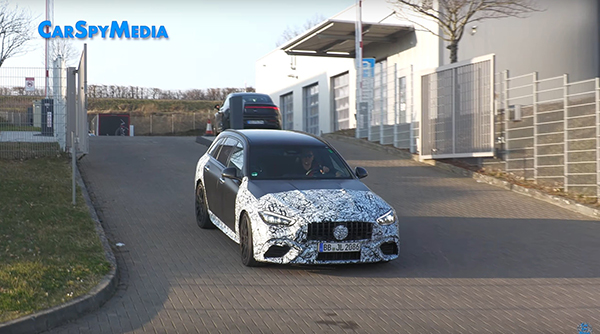 No tuning wizardry will ever give it a V8 burble, but at least it will still be instantly recognizable as an AMG. The sporty design will be emphasized by the swollen fenders, bigger bumpers, larger air intakes, typical grille with vertical slats, aggressive diffuser with cutouts for the quad exhaust pipes, one for each cylinder of the engine, and the AMG badging, and exclusive wheels.

Uprated brakes and dedicated chassis setup will further help it differentiate from the normal versions of the new C-Class, and it will continue to take on the likes of the BMW M3 and Audi RS 4. The unveiling is expected to take place in the coming months in Europe, and the first units should arrive Stateside for the 2023 model year.