Mercedes-Benz is currently working on the next-generation C63 AMG and the performance C family is expected to switch to a hybrid 2.0-liter four-cylinder engine. Some 10 years ago, however, the C63 had a giant 6.2-liter V8 unit under the hood, mated to a seven-speed automatic gearbox. For those of you still missing the golden era of the German V8, here’s a little something for you.

A new video by AutoTopNL takes us to the Autobahn where the team behind the YouTube channel is putting a Mercedes C63 AMG from the W204 generation to its limits. It’s from the wagon body style, which makes it even more desirable for most of the Motor1.com crew. And with its perfect V8 soundtrack and quick gearbox reactions, it’s very close to being the perfect vehicle.

As you would probably expect, this C63 has no problems reaching speeds above 124 miles per hour (200 kilometers per hour). The highest velocity seen in this video is around 160 mph (256 kph). The funny thing is that when the highest speed is achieved, there’s another vehicle in front of the C63, which also appears to be a Mercedes wagon. At no point the car in front lets the C63 overtake it. 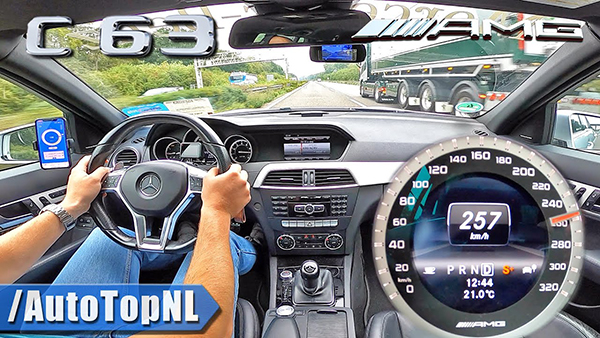 With 451 horsepower (336 kilowatts) and 443 pound-feet (600 Newton-meters) of torque, the C63 from the W204 is definitely not the most powerful factory C-Class. The new one, for example, is expected to produce as much as 600 hp (447 kW), which means it should be significantly quicker off the line. However, don’t expect the same glorious engine and exhaust soundtrack.

Speaking of the C63 W204, even Michael Schumacher once had one. He used a black C63 wagon as a company car when he joined the Mercedes GP Petronas Formula 1 Team in early 2010. The legendary pilot drove the Merc for several months and just recently, it was sold for €27,600 (about $29,140 with the current exchange rates) during a Bonhams auction.