I’ve had my 2018 Mercedes AMG C63s Coupe for a year and a half and put 20K miles on her, it’s been driven through all kinds of weather and snow can be fun but also life threatening lol

Whether you live in the snow (rust?) belt or not, you probably already know that driving on slippery stuff isn’t a good idea when you’ve got sticky summer tires on your car. These super soft compound tires are designed for temperatures above 40 degrees, after all. Many aren’t even really good in the rain, let along the snow and ice. But that isn’t to say that you can’t use them in the white stuff. Just that it’s a little dangerous, though also kinda fun. Especially when you’re driving a Mercedes-AMG C63 S. 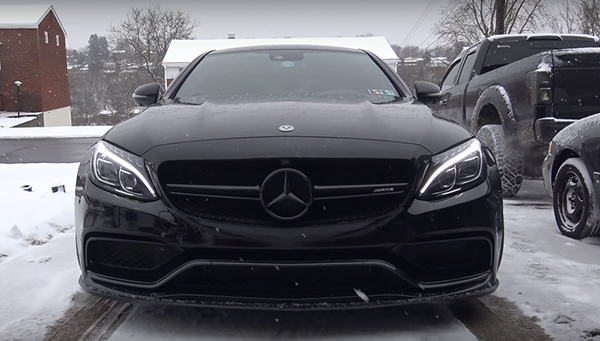 That didn’t stop YouTuber AutoVlog from testing his Mercedes-AMG out following a dusting of the white stuff recently, however. Thankfully, he did it in the confines of an empty parking lot, not a public road. Because it’s obviously hard to find traction with slick tires and 500-plus raging horsepower under the hood. But the whole idea came about because our host was clearly growing weary of the long, dreadful winter.

“This weather is sorta getting to me,” he admits. “It’s pretty boring to have snow like this. You can’t really do much. Especially not in this car. I haven’t driven it in what feels like forever.” Everybody who lives up north certainly knows that struggle. But as our host quickly learns, there’s a reason why people don’t drive cars like this in the winter. 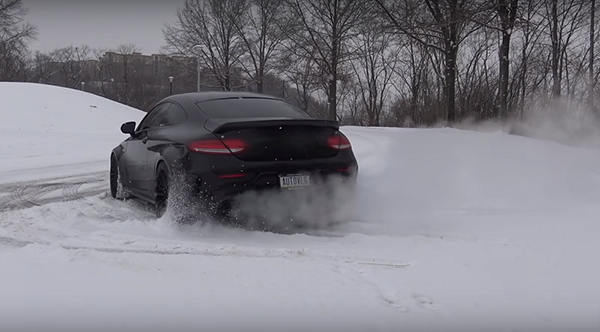 “Yea these tires, they don’t work at all,” he immediately figures out. “But it’s fun. I’m gliding just from turning. You can’t do anything. If you’re going 10 miles an hour and you just lean into a turn, the whole car slides. It’s useless. You can have some fun, though.”

So there you have it. If you were thinking about taking your summer tire-equipped Mercedes-AMG out for a snowy drive, perhaps you should think again!