In this video, we fly 800 miles with a bag full of tools and parts to fix and drive home my new C 63 AMG that I bought sight unseen. Enjoy the adventure and let me know what’s the farthest from home you’ve been stranded in a car.

If you have some experience flipping cars, you understand sight unseen cars can be a bad idea, especially if it comes with engine-related issues. Alex Palmeri of LegitStreetCars YouTube channel recently bought a 2009 Mercedes-AMG C63 for $16,000. The unfortunate bit is that it was listed with a troubled engine, and worse, it was 800 miles away. He made a bold decision and booked a one-way plane ticket, hoping to drive it back.

Flipping cars has a good and a bad side. It’s like gambling. You’ll either make a profit or watch your money disappear in endless repair bills.

They say, “a bird isn’t afraid of clutching on a broken branch because it trusts its ability to fly.” Likewise, Palmeri believes in his technical automotive skills so much that he was willing to risk paying for an expensive air ticket back home.

“Now, this car supposedly has a bad engine, it was listed that way, and it doesn’t run, but I don’t think that it’s bad. This thing is a 50,000-mile clean title car,” Palmeri said.

If Palmeri is wrong, he’ll not only need an expensive plane ticket home but $1,000 in shipping fees and $11,000 more for a new C63 AMG engine replacement. 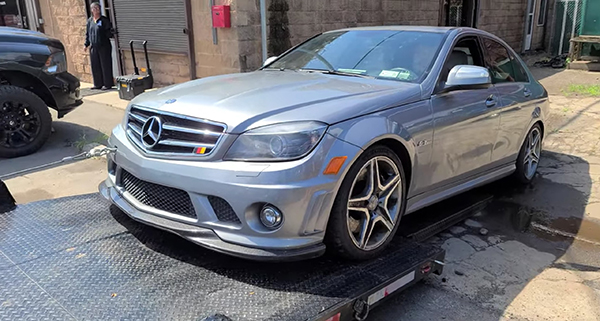 According to the previous owner, his brother was driving the car, and it suddenly began misfiring, popped a check engine light, and stalled. All attempts to turn it on failed.

Palmeri thinks the problem is a stuck-open injector. He’s worked on a 2009 C63 before and knows they are prone to issues. He’s even made a factory defect video on the M156 engine.

In 2011, a class action lawsuit was filed for a possible defect in the 6.2-liter M156 engine. According to the case, a defect stemming from camshafts and valve lifters leads to premature failure.

Palmeri wasn’t too lucky with this one. It had a cracked piston. His best bet is getting a replacement engine. We recommend watching the video below for a glimpse of the assessment process.