Even though the Mercedes-AMG Project One concept was unveiled nearly four years ago, the excitement surrounding the delayed production model is still very much alive. A Formula 1 car for the road sounds like a cliché, but listen to the sweet noise delivered by the turbocharged V6 and you’ll immediately realize it sounds a lot like Lewis Hamilton’s championship-winning cars.

While an F1 engine idles at 5,000 rpm, that’s obviously not feasible for a street-legal production model. AMG had to overcome quite a few obstacles to stabilize the revolutions per minute at 1,200 and also meet stringent emissions regulations applicable to production vehicles. This issue alone caused nine months of delay in the development phase, but the engineers from Affalterbach have solved the issue. Flat out, the 1.6-liter reaches speeds of 11,000 rpm. 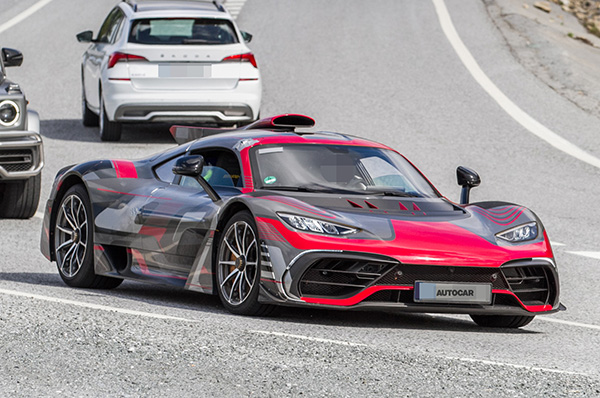 Footage from the Nürburgring shot by CarSpyMedia also shows a second prototype that might’ve had a technical issue as we can see the car coming to a halt all of a sudden, seconds after entering the circuit. The test driver fires up the V6 again and raises the vehicle’s ground clearance before tackling the Green Hell.

Eagle-eyed readers will notice the car entering the workshop at the end of the video has the same license plate as the second prototype but features different mirrors. That’s because the footage represents a collection of videos rather than a one-time recording. Both test cars used by AMG had the new livery previewing the E Performance branding debuting soon with the GT 73e.

The AMG One has all the ingredients to set a new record for a production car at the Nürburgring. Meanwhile, Lamborghini is looking to dethrone the AMG GT Black Series with the Huracan STO, but the boys and girls from Affalterbach could easily fight back with their F1-engined hypercar. The current lap record of 6 minutes and 43.61 seconds will fall sooner rather than later. The AMG One could have more competition coming from the Aston Martin Valkyrie, another track-focused hypercar that had a less than smooth development phase.