Jeremy Clarkson leaves the Chelsea F.C. team astounded with his new creation. Can he get any buyers for the world’s first-ever Land Rover sports car?

When the trio of Clarkson, Hammond, And May set about creating their own car show on Amazon, we may have wondered if they would retain the kind of hair-brained japery. Thankfully, we needn’t have worried, as, for the most part, The Grand Tour continued to serve up the delights.

Amongst the many challenges and inventions by the trio, one stuck out like a sore thumb: “The Excellent.” The Excellent was a creation by none other than the hammer-abusing Clarkson. To put it nicely, the Excellent was made for a niche market, more specifically, a market consisting of those named Jeremy Clarkson.

The purpose was to create an option for those who wanted a sporty SUV with great off-road capability, was good on the track and had sharpish steering — a concept that, in Clarkson’s opinion, hasn’t been done correctly by any major manufacturer. The Excellent is a union of 2 vehicles, a 1980s Mercedes SL and a Land Rover Discovery. 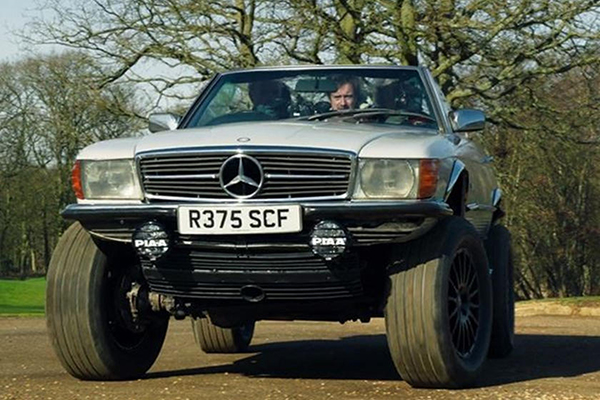 Although originally aired in the first season of The Grand Tour, those who don’t have access to Amazon Prime Video can finally enjoy the horror of this particular segment. In it, the trio takes The Excellent out in public, as Clarkson attempts to tempt some Chelsea FC players. He then tries to prove its worth by entering it into an auction, with predictable results.

Ever wondered what happened to The Excellent after the episode was shot? It turns out that the car is still owned by Jeremy and has since been reviewed by the folks over at DriveTribe.

The Grand Tour is expected to return later this year. The yet-to-be-released Scottish caper was filmed during the ongoing coronavirus pandemic in a “COVID bubble”. The episode is expected to feature the three taking a selection of American metal to the highlands.