Mercedes-Benz started making the 560SL in 1986. It equipped this vehicle with a 5.5-liter V8 and gave it a hard top and a soft top. Even though it is not currently as hyped up as other models from the same era, this vehicle could serve you well in some parts of the U.S. right now or starting next year, when warmer temperatures will once again make most of us yearn for a scenic drive through the mountains or on the coast.

Back in the 1980s, Mercedes-Benz was perceived as a creator of stylish, powerful, and reliable cars. The boxy, linear sketches were brought to life by engineers and technicians. The auto brand was the epitome of restrained performance because comfort was something its customers desired, and they had to have it. Just to put things better into perspective, while American brands were selling cars with all sorts of creature comforts, the SLs made in the 1970s did not come with power seats. Nor did any other model from the carmaker’s portfolio, for that matter.

But one thing Mercedes-Benz had back then was its obsession with build quality – and it served the company well. There weren’t that many competitors around, the economic outlook wasn’t bad, and there were fewer regulations the brand had to respect. That’s why we hear even today that the Mercedes-Benz models of the past continue to be better than what has been in production since the 2000s.

So, if you’re looking for a solid classic vehicle that has sports car traits and also treats comfort with the utmost importance, then the 1986 Mercedes-Benz SL could be the one for you.

Fortunately, we found one for sale on Bring a Trailer with only 27,000 miles (43,452 kilometers) on the odometer. Finished in silver over a red leather interior, the 227-HP (230-PS) vehicle also comes with a four-speed automatic gearbox that is guaranteed to make your cruising more comfortable. Other than that, this open-top beauty also has a black soft top and a color-matching hard top. 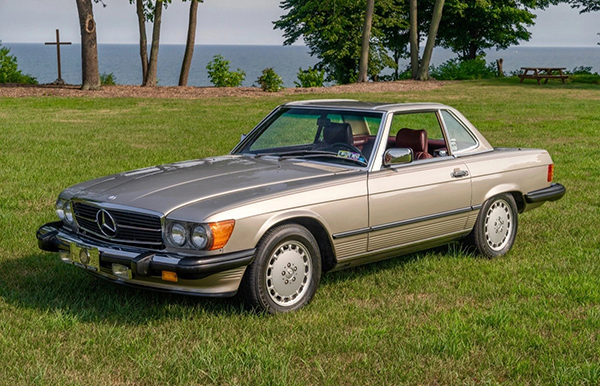 The owner did not change the radio cassette audio system, so the roadster retains its flair. But it was refurbished in 2010 to make sure it works properly.

Don’t worry about not having two extra seats in the back. They would have been most likely used to store luggage, so it’s better than the space not upholstered in leather. Instead, there’s a color-matching soft carpet-like material installed.

The rear-wheel-drive 1986 Mercedes-Benz 560SL is meant for relaxing drives, so it comes with cruise control, automatic climate control, power windows, central locking, and an alarm system. If you have a passenger with you, then make sure to drive safely – only the person behind the wheel gets an airbag, according to the seller’s description on the auctioning platform.

If you’re interested, then you must know that the auction ends in seven days. At the time of writing, there was no offer submitted, so you could be one of the first to show your appreciation. Just keep in mind the vehicle is not currently registered, even though the Pennsylvania title is available.