The new AMG SL is here and that means that we at MANHART have rendered our interpretation of the new convertible. The SL 800 R showcases signature MANHART upgrades, such as the black base color and the golden decal set including window banner and golden pinstripe on the MANHART Concave One wheels. 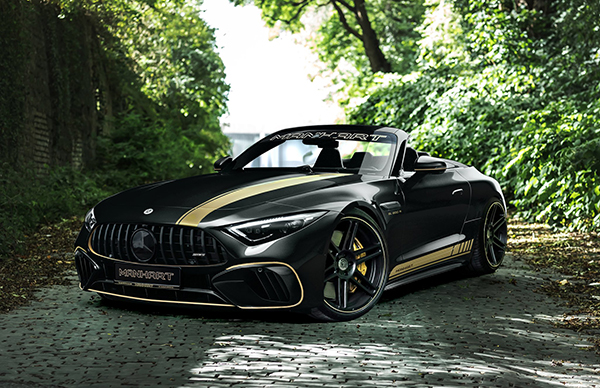 The power of the 4.0-litre biturbo V8 engine is boosted to 800 hp and more than 1000 Nm of torque using our in-house developed turbo performance kit, which includes a new set of turbochargers, intercooler and carbon intake. The SL is lowered offering a better stance. Additionally, we offer additional options to refine the interior, exterior and technical aspects of the vehicle.

There are plenty of reasons to love the Mercedes-AMG SL. For fans of horsepower, 577 of those reasons are found under the SL63’s swooping hood, courtesy of its twin-turbocharged 4.0-liter V8 engine. But the AMG-honed SL-Class is also a pleasure to drive, be it a relaxing highway cruise or a thrill ride through the canyons. Indeed, our Mercedes SL first drive review found little reason to fault this handsome roadster. 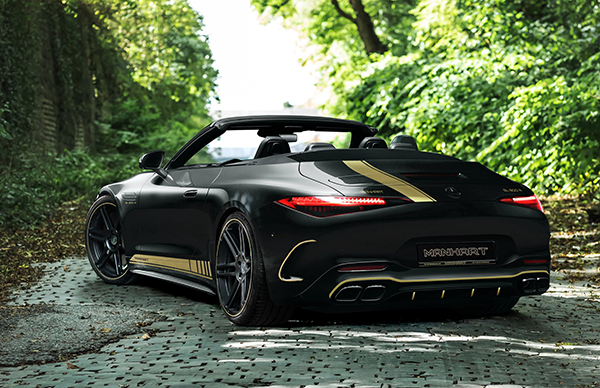 That’s not to say Manhart Performance found fault with it. But let’s be honest: Manhart is always going to Manhart, and that usually means adding a coat of black paint with contrasting gold stripes and a few more ponies under the hood, among other things. That’s exactly what we have here with the new Manhart SL 800 R, and you can probably guess why that number was chosen.

Between the SL’s fenders you’ll still find a twin-turbocharged 4.0-liter V8 engine. In Manhart’s care, new turbochargers are added along with a new intercooler and carbon intake. We suspect there are a few other changes such as a new engine tune at play, but the aftermarket company isn’t keen to offer other details at this point. The result is 800 hp and over 738 pound-feet (1,000 Newton-meters) of torque, all going to the Manhart-specific rear wheels. 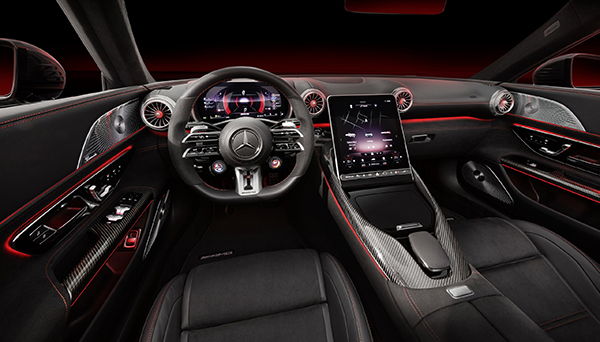 The tuner doesn’t offer performance specs, but considering a stock Mercedes-AMG SL63 reaches 60 mph in 3.5 seconds en route to a 196-mph top speed, the SL 800 R should be considerably quicker – provided you can get traction. Suspension modifications lower the car, but details on those upgrades are similarly unavailable. Manhart does say the 800 R is offered with “additional options” for tweaking the performance envelope, not to mention other exterior and interior upgrades. In other words, it’s a made-to-order rocketship wrapped in smooth SL styling.

Pricing isn’t mentioned either, as the Manhart SL 800 R is indeed a new project announced on February 8. However, the German company is currently accepting build requests for those seeking a bit more shock-and-awe than what AMG already cooked up.