The buildup towards the next-generation Mercedes SL has been long, but the wait is nearly over. Mercedes first announced the SL Roadster back in Summer 2020, and since then, we’ve seen the full interior and the new lightweight chassis. These small teasers were leading up to a big reveal, but a recent Instagram leak from an internal presentation just spoiled the surprise. The photo is pretty blurry and cropped in, but it’s still our first good look at the undisguised 2022 Mercedes-Benz SL-Class. 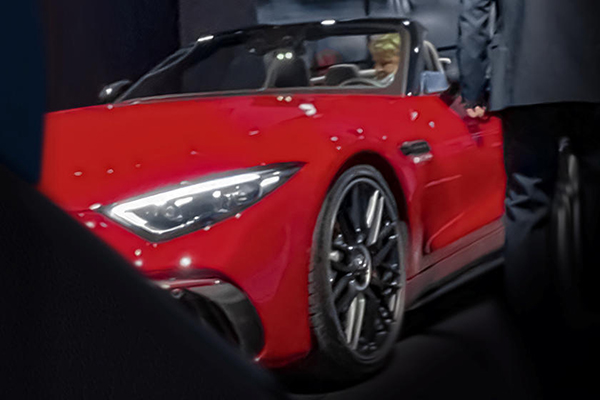 There’s nothing too surprising here, since we’ve spotted the next-gen SL out testing on several occasions, albeit with camouflage over the body. Mercedes has gone for a bold red as the launch color here, likely to let everyone know that this SL was developed by AMG to be a sporty replacement for the GT Roadster.

This new SL looks far more aggressive than the car it replaces in order to target a younger audience. The sharper, more angular headlights give it a mean appearance that should stand out next to a Porsche 911. The black wheels in this leaked image appear to be a new AMG design with a center-lock look that is likely just for show. Though it’s cut off in the photo, we already know based on spy shots that the SL will get the Panamericana grille found on other AMG models. 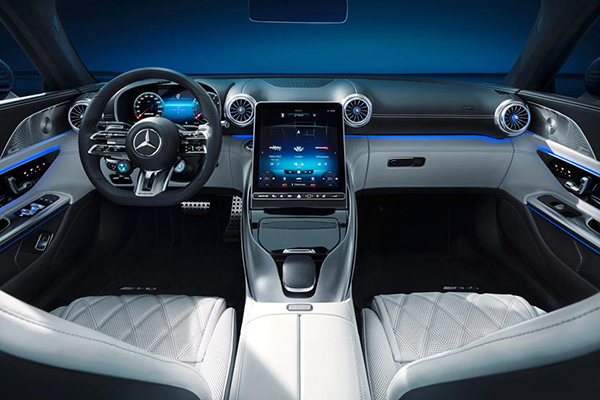 Inside, the SL features a radical new interior that takes elements from the latest Mercedes models like the S-Class. A massive 11.9-inch touchscreen sits in the dash, with a secondary screen housed in the gauge cluster. Unlike the outgoing SL, this one features a small back seat for a 2+2 configuration.

Mercedes hasn’t announced engine options yet, but we anticipate the base model will use a 3.0-liter turbocharged inline-six mild-hybrid producing around 429 horsepower. A 4.0-liter twin-turbo V8 will be the optional engine, likely producing over 600 hp in its highest configuration. It’s unclear if Mercedes will also drop in the plug-in hybrid drivetrain from the AMG GT 63 S E Performance, which produces 843 hp total.

We should learn more when the 2022 SL makes its official debut later this year. The reveal is rumored to take place on October 20, 2021.