The World’s Most Expensive Car

The Mercedes-Benz 300 SLR is best known as the roofless roadster that dominated road racing of the 1950s. It most famously won the 1955 Mille Miglia with Sir Stirling Moss at the wheel. During this race, Moss and the 300 SLR set a new average speed record for the race averaging 97.96 mph (157.650 km/h) over the 900-mile race up the Italian peninsula. 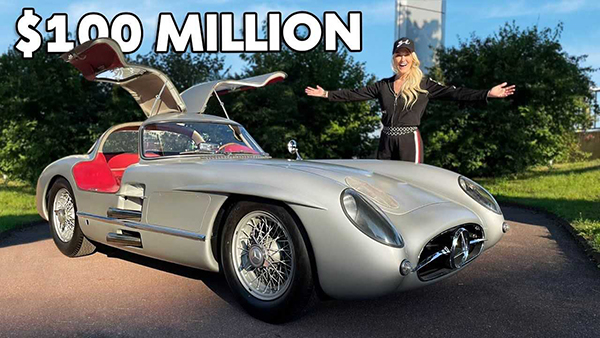 Sadly all of the 300 SLR’s racing success was overshadowed by the tragedy of the 1955 Le Mans Race. A 300 SLR driven by a private team was vying for the lead when it rear-ended an Austin-Healey on the pit straight that was slowed by a Jaguar attempting to pit. Debris flew into the stands killing 83 spectators and injuring over 180 more. The 300 SLR’s high content of magnesium in the bodywork caused fires to burn out of control and prompted the other 300 SLR teams to pull out of the race.

The horrific incident coincided with Mercedes-Benz’s decision to pull out of motorsports altogether. This meant the 300 SLR coupe project was dead, and only two test mules were built. One sat, and the other was daily driven by Rudolf Uhlenhaut as a daily commuter. Today Mercedes-Benz keeps these incredible machines in their private collection.