Not every country is ready to approve and receive a Level 3 autonomous driving system, but things are moving. After pushing the country’s rulers harder, German carmakers got the legal framework to develop advanced driving systems.

That happened in 2017, and ever since there has been a race between the country’s three big carmakers, Audi, BMW, and Mercedes-Benz. While the finish line (Level 5 autonomous driving systems) is not yet reached, Mercedes-Benz is one step ahead of its competitors. Actually, it is ahead of everyone else.

In Germany, Mercedes-Benz showed in July this year that the EQS can drive by itself on motorways at speeds of up to 60 kph (38 mph). That speed is capped by specific regulations, for now. A demonstration held in its testing grounds near Stuttgart proved that it can avoid obstacles, brake, honk the horn, change lanes, and… stay away from emergency vehicles.

The big question is, how did it do it? The short answer is simple: technology. But there’s more than just one word to explain the magic that happened with the Drive Pilot system imagined by Mercedes’ engineers. 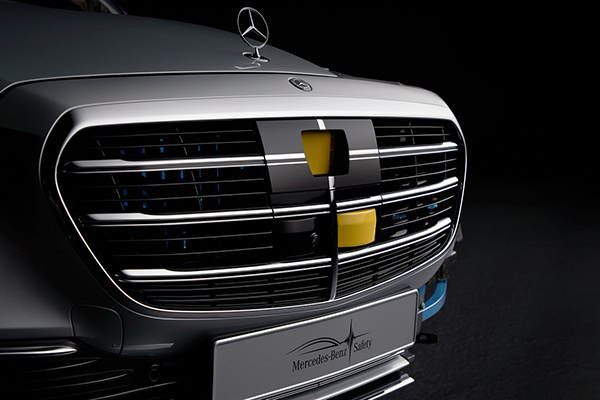 First of all, the EQS is fitted with a LiDAR (laser imaging, detection, and ranging) system installed in the grille. The designers had their say and planted two devices, but one is blind – it’s there just to offer symmetry. The working sensor though features its own high-pressure washer nozzle that can clean it if it gets dirty. It also receives weather information from the windshield rain sensor, and a moist sensor behind the front wheels. Do you think that’s insane? Just wait!

On the rear side of the roof, the EQS features a bulge. You may be forgiven if you think it is just a large GPS sensor. Yes, it is one, but has an accuracy of only a few inches. Imagine that it is more accurate than a military rocket from just a few years ago. It can also detect continental drift! Wait! What? Yes, exactly! All continents are slowly drifting every year, and to pinpoint the vehicle’s exact location, the system can detect that movement and adjust the car’s position on the roads accordingly.

A rear-mounted camera also detects emergency vehicles’ red and blue lights, and steers the car away from that lane (in Europe, drivers are not required to stop completely when an emergency vehicle approaches, unless necessary due to road and traffic conditions).

But that’s only part of the Drive Pilot. In the event of a road hazard, the car can avoid by steer or braking independently while the driver can sip their coffee, but immediately the system will require them to take control of the steering wheel. If they don’t do that, the vehicle will slowly stop. 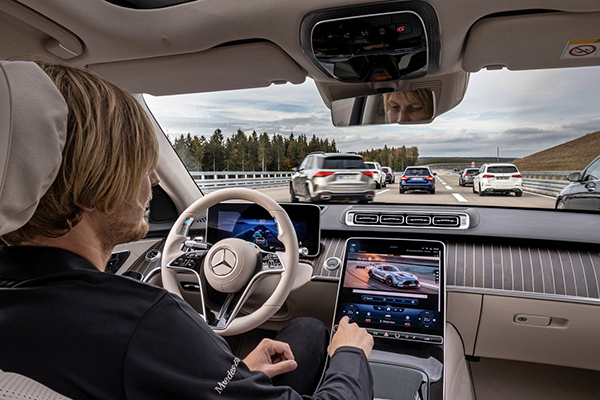 To activate the system, the driver has to push the buttons inside the steering rim, and a blue light will blink and confirm the command. Also, an “A” letter will appear on the driver’s instrument panel, which is a TFT display. One important aspect of the assisted automatic driving mode is that the driver has to have a clear view of the road ahead. That means that they cannot look away for too long, and a camera placed inside the dashboard will look at the driver’s face all the time. But they can read the news on the big infotainment screen placed atop the center stack.

Another key element of the Drive Pilot is that it needs to know the roads very well. The system doesn’t work on any motorway. At the end of November, Mercedes-Benz confirmed that the cars fitted with the assisted automated driving systems can drive on exactly 13,191 km (8,196.5 miles) of tarmac (that German precision is sometimes annoying, I know). They will cover more ground after receiving the conditionally automated driving approval.

You might wonder why this system received international approval, but it is unavailable in some European countries yet. Honda, for instance, has a Level 3 autonomous driving system approved in Japan. But since it follows rules available only there, it is just a local recognition of capabilities and merit. On the other hand, the European Union has different laws, and some of them, which are enforced in Germany, for instance, are automatically recognized by other EU countries.

For now, the EQS and the S-Class are the vehicles most suitable to receive the Drive Pilot assist system, but we can expect that other models from Mercedes-Benz’s stable will follow. The German carmaker said that it will implement the new feature starting with the first half of the following year.

Meanwhile, it did some testing and road-mapping in the U.S. and China. It won’t be implemented in these countries yet, since there isn’t a legal framework to allow Level 3 autonomous driving systems.