The Mercedes-Benz S-Class enjoys some of the most loyal owners in the full-size luxury sedan segment. Its multi-generational buyers owned Heckflosse 220 SEs in the 1960s, powerful 450 SEL 6.9s in the 1970s, and seemingly bulletproof W140s in the 1990s. That devotion can be both a blessing and a curse, since the S-Class must improve over its predecessor but can’t change so much as to alienate those repeat buyers.

The 2021 Mercedes-Benz S-Class pulls off that balance masterfully. With gracefully updated styling, poised road manners, and who-needs-a-Rolls-Royce comfort, both the inline-six S500 and V8-powered S580 are sure to appeal to trade-ins. Luring new customers, meanwhile, will be the work of the impressive 14.1-inch infotainment display, improved driver assistance features (capable of Level 3 autonomy in the future), EQ Boost mild-hybrid technology, and an optional augmented-reality head-up display. These modern features ensure the S-Class remains competitive, but they don’t detract from the stately sedan’s legendary driving experience.

Deutschland Darwinism
At first (and second and third) glance, the 2021 S-Class doesn’t look much different from its predecessor, with only a few notable alterations. A crisp, full-length shoulder crease and subtle rocker surfacing add some structure, visually stemming from a fuselage-like front grille. Narrowed headlamps share their three-element LED design with the GLS SUV and electric EQS, and the taillights borrow more than a little from the CLS four-door coupe, giving the graceful rear quarter panels some aggression.

Viewed in profile, the arching window opening hides a squarer rear roofline, preventing the S580 from looking too blocky without sacrificing interior room. And up front, the biggest Mercedes four-door wears an eight-segment front grille and graceful hood ornament. It’s a nice reprieve from the plate-sized emblem that appears on every other Benz sedan’s grille – formerly a styling feature reserved for coupes and SUVs – and wholly appropriate for the traditional nature of the S-Class.

The new S580 is vastly different from its predecessor inside, however. For starters, Mercedes’ old double-flatscreen infotainment and instrument array is gone, replaced by a single 12.3-inch gauge cluster and a slanted-square 12.8-inch OLED center touchscreen. The cabin’s design is less organic and flowing than the 2020 S-Class, with squared-off footwells and rectilinear HVAC vents appearing on the top and sides of the dash. A flat panel of wood cuts across the dashboard behind both the infotainment and the gauge displays before sweeping downward on the door panels – our tester’s “Piano Lacquer Flowing Lines” trim emphasized the effect well.

The cabin also boasts dynamic ambient lighting with a variety of Donna Summer–approved colors (the cascading Miami Rose scheme was a favorite, with teal, pink, and orange colors cycling through the cabin). These lights appear on the dashboard, console, door panels, and rear parcel shelf for a 360-degree effect, but they also serve an important purpose. For example, if a passenger is about to open a door and the car senses a vehicle approaching in the adjacent lane, the ambient lights will flash red.

Pleasure Yacht
Like many luxury items, the S-Class doesn’t make a whole lot of pragmatic sense. With a starting price of $116,300 in S580 4Matic trim, the new sedan is $8,850 more expensive than the 2020 S560 4Matic, and with several choice upgrades, our tester ran up a $143,240 bill. A well-equipped Mercedes-Benz E450 does a decent impression of the S-Class’ styling at just over half the cost, and a GLS 580 beats the big sedan’s interior room for less cash, if that’s a priority. The new-for-2022 EQS luxury EV is another rival sibling that’s possibly more attractive to the tech crowd. So why choose a Sonderklasse instead?

For one, the S-Class boasts the smoothest freeway ride your author has ever experienced. In Comfort mode, the standard air suspension smothers small imperfections, only slightly jostling passengers over larger potholes. There’s some minor pogo action over big bumps, but Sport cures the problem and preserves nearly all of the sedan’s ride compliance. A sharper Sport+ setting provides better reflexes still, along with enough comfort for all but the most libertine passengers (who’ll likely demand the advanced E-Active Body Control suspension with road-scanning camera anyway).

Whatever the underpinnings, those sybarites will love the standard multicontour front seats with heating, ventilation, and massage. However, finding a perfect position is difficult. First, the door-mounted adjustment controls are incredibly stiff, and while that may seem like a nitpick, they’re really that bad – folks with mobility issues will have trouble. And secondly, altering the lumbar requires a trip to the center screen, where an inscrutable matrix (carrying over from the old S-Class) asks the driver and front passenger to decide how high up and how far out they want their support. What’s wrong with a far simpler four-arrow button?

Once they’re suitably dialed in, the front seats are fantastic, offering plenty of support and cushiness for long drives. An extended, traffic-free road trip also allows the occupants to explore the big Benz’s nearly faultless interior appointments. The wood trim, in particular, is gorgeously fitted, and the optional headrest pillows are a simple way to make the cabin feel extra-plush. The cheap-looking piano black finish on the center console, somewhat flimsy door handles, and plasticky seat frame trim (which you’ll inadvertently graze before remembering the door-mounted seat controls) are the only detractors from an otherwise-fab cabin.

Our tester featured a $3,800 Warmth and Comfort package that brings heating to the steering wheel, front and rear door and center armrests, and outboard rear seats (along with ventilation and power adjustments). Thus equipped, the back was as comfortable as the front, with more than enough room to stretch out and cross our legs – one can only imagine how opulent the extended-wheelbase Maybach S-Class will feel. In your author’s plebeian mind, it’s hard to imagine many vehicles being more comfortable than the S580, but to Mercedes, the limit does not exist. 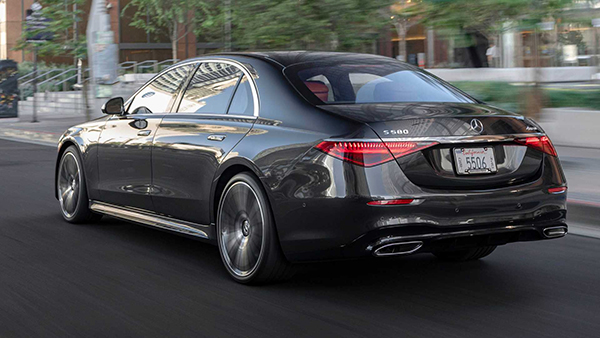 Picking Up The Pace
In spite of its ultra-luxurious around-town ride, the S-Class is surprisingly nimble on feisty roads. Its sheer size limits the driver’s confidence in narrow confines somewhat, but our tester’s optional 4.5-degree rear axle steering ($1,300) provided both stability on higher-speed sweepers and tight reflexes in hairpin turns. Those wanting more will appreciate the available 10-degree rear-axle steering, though the lesser unit is probably fine for most.

Even without the forthcoming E-Active Body Control’s Curve function, the new S-Class does an excellent job of keeping body motions in check. Body roll is present, but never worrisome, and mid-corner bumps do little to upset the chassis. And just as Sport and Sport+ are usable on the highway, Comfort is actually decently adept at carrying speed up a twisty two-lane. Helping matters are cross-drilled disc brakes hiding behind optional 21-inch wheels (20s are standard on this AMG Line tester), which ensure surefooted stopping power even on repeated use.

Our S580 4Matic tester also sports a spectacularly smooth twin-turbocharged 4.0-liter V8 making 496 horsepower and 516 pound-feet, as well as Mercedes’ EQ Boost 48-volt mild-hybrid system. The moderate electrification doesn’t add to the engine’s total power output, but like similar systems, it smooths out gear changes, reduces turbo lag to practically zero, and allows the engine idle-stop to operate nearly imperceptibly (both at stoplights and while coasting down a hill). In spite of those tricks, the grunty engine musters 20 miles per gallon combined, down one tick over the outgoing S560 4Matic.

Helping console repeat customers is the S580’s jet-engine thrust. While the Mercedes-Benz S-Class doesn’t exactly encourage its drivers to give in to prurience – that’s the job of forthcoming AMG models – the V8 is still a hoot to hustle down an onramp or an empty stretch of two-lane road. Power comes on strong and smooth, let down only by a nine-speed automatic transmission that occasionally seems surprised by the driver’s demand for a lower gear when throttling out. Sport and Sport+ driving modes help some, but hotshots behind the wheel should make use of the smallish paddle shifters instead. 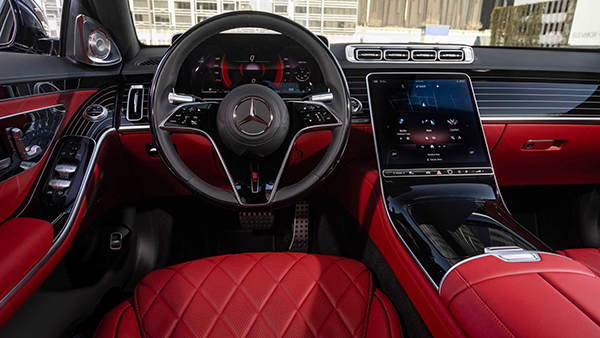 Pixel-Perfect
Every S-Class comes standard with a sloping 12.8-inch display running the latest Mercedes-Benz User Experience (MBUX) infotainment. Aside from confining too many features to the screen – that awful lumbar adjustment, for example – MBUX is pretty easy to use, and “Hey Mercedes” voice functionality is more refined and intuitive than ever. Thumbpads on the left and right steering wheel spokes command the digital instrument cluster and center display, respectively, but the latter also offers a responsive touchscreen. It’s also less distracting than portrait-oriented units, keeping useful items well within the driver’s line of sight.

Speaking of, our tester’s augmented reality head-up display (part of a $3,000 3D Technology pack) is one of the most exciting features of the new S-Class. Used in conjunction with MBUX navigation, it overlays turn-by-turn directions right on the driver’s view of the road ahead, actually pointing at the next maneuver upon approach. The augmented-reality HUD also enhances the standard driver-assist suite by illuminating lane lines in red if the S-Class gets too close, highlighting the adaptive cruise control’s distance setting and lead vehicle, and alerting the driver of cars or bicycles in the blind spot.

That advanced driver-assist technology is quite possibly the best in the industry, and although it’s not hands-off like Cadillac Super Cruise, it does an excellent job of keeping the S-Class safely ensconced in its lane and distanced from other cars. The lane-change assist feature, which first appeared on the 2018 S-Class, is particularly useful in heavy traffic, taking over most of the steering duties when getting out from behind rolling roadblocks.

The S-Class is also capable of Level 3 autonomy in regions where local regulations allow it – currently, the company’s Drive Pilot autonomous technology is only available in Germany at speeds below 37 miles per hour. The automaker wouldn’t say if the S-Class can be updated over the air to allow autonomous driving, but if so, we think US-market cars will get the feature sometime in 2022, pending vital infrastructure updates. 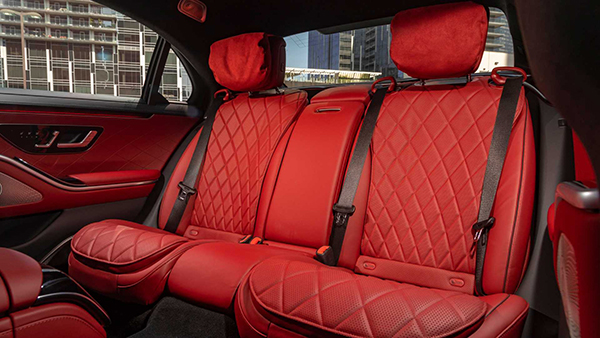 Updating Tradition
It’s no secret to anyone that many modern consumers are making the switch from traditional sedans to crossovers. The auto industry’s most expensive segments are often immune to flashes in the pan, but the Mercedes-Maybach GLS proves that even the well-heeled are succumbing to the siren song of an SUV instead of a sedan. That trend calls the future into question, particularly combined with the advent of widely available luxury EVs like the EQS. The new S-Class could be the final internal-combustion flagship four-door that Mercedes makes.

If so, this 2021 S580 4Matic carries not only the mantle of its excellent predecessors but that of automotive history. And luckily, it seems to be up to the challenge. Although its BMW 7 Series and Audi A8 L rivals are much less expensive, they don’t carry themselves with the same dignity as the big Benz, which also manages to blend surprisingly fun driving dynamics with its comfort. The cherry on top is technology that enhances, rather than distracts from, the driving experience. With only a few faults, the new S-Class is pretty damn close to perfect, and both loyalists of and newcomers to the posh sedan will welcome it with open arms.