Let’s start by proclaiming what’s at the very top of mind: The 2020 Mercedes-AMG S65 Final Edition is the best Mercedes I’ve ever driven. Bold, I know, to declare a car that starts at over a quarter-million dollars to be “good,” and yet here I am putting my stellar reputation on the line. 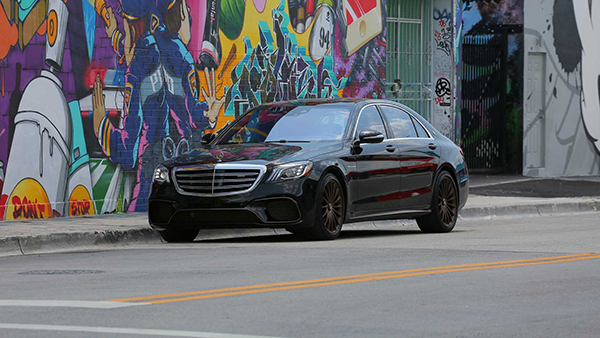 There are endless reasons why the S65 Final Edition is such a treasure, but one stands above them all. Mercedes threw absolutely everything it has at this car. From the hand-built V12 engine to the custom leather upholstery, to the huge suite of tech and convenience features, the company employed its entire arsenal and the end result is a car that we’ll look back on and admire years down the line.

The Final Edition marks the end of the sixth-generation Mercedes S-Class, as well as the last time the big V12 will live under the hood of an AMG model. Yes, we expect the engine to live on in standard Mercedes and Maybach models, as well as in vehicles from other brands like Pagani. But this is the final hurrah for 12-cylinder AMGs.

To celebrate the occasion, Mercedes-AMG produced just 130 examples of the S65 Final Edition. And they’re such hot commodities that Motor1.com was the first American outlet granted special permission to review the one vehicle available for media to explore.

Details To Die For
The Final Edition is happy to tell you that it’s special before you ever open the door or pop the hood. For $21,150, the Final Edition package adds bronze to just about everything: the wheels, the lower front fascia, and the massive trim piece that runs along the side profile. AMG also added an Affalterbach Crest onto the C-pillar which looks phenomenal and should be uniform across all AMG models. Special touches continue inside with unique floor mats, a few Final Edition interior badges, bronze stitching, and some gorgeous carbon fiber that features a copper-infused weave. Every Final Edition wears a coat of Obsidian Black Metallic paint and custom black leather upholstery.

That’s some serious coin for an all-aesthetic package, but we can’t deny that the Final Edition stands out from just about every angle with its garish bronze accents. Are they for everyone? No. But only 130 people needed to fall in love, and according to Mercedes, mission accomplished: Each of the 130 cars – including the one I am driving – has a home. 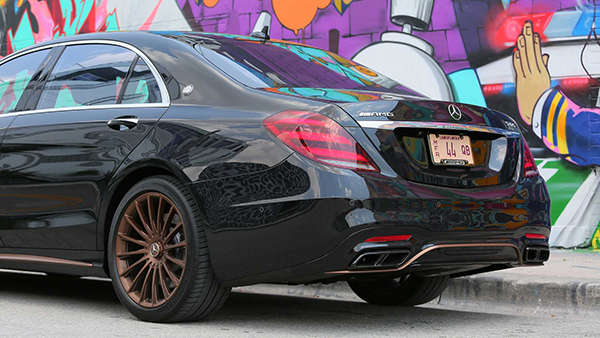 The Final Edition is happy to tell you that it’s special before you ever open the door or pop the hood.
Aside from the Final Edition touches, the rest of this S65 is as good as they come. As you’d expect, material quality is top-notch, from the leather covering the headliner and door panels to the metallic air vents and glossy carbon fiber. Special details are everywhere you look, too, like the 27-speaker Burmester sound system and the excellent Mercedes ambient lighting system, the two of which transform the S65 into a mobile music festival at night. Other features like the cabin perfuming system and night vision pedestrian detection debuted on the S-Class years ago, and they’re still impressive today.

Specced sky-high, this Final Edition features $8,000 worth of options benefitting the lucky SOBs in the back. There’s a $1,100 refrigerated rear center console, which comes in handy transporting thank you gifts to fancy parties. The $4,950 Magic Sky Control panoramic sunroof goes from transparent to nearly opaque at the touch of a button. And $1,950 for the Executive Rear Seat package which adds a seat-splitting rear center console, tray tables, extra pillowy headrests, and heated and cooled cupholders. Long story short, you won’t find a nicer place to sit this side of a Rolls-Royce or Bentley. All these goodies brings us to an as-tested price of $265,745. And yet, somehow I found myself sitting in the backseat rationalizing the number, which goes toe-to-toe with that of my studio apartment. 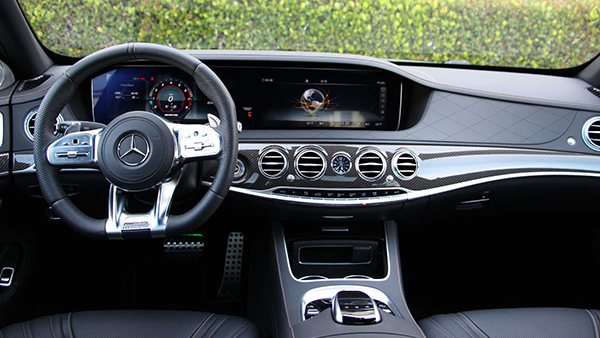 A 12-Cylinder Swansong
The twin-turbocharged 6.0-liter V12 underhood produces 621 horsepower and a hard-to-fathom 738 pound-feet of torque, the latter of which is available from 2,300 rpm. Put another way, the S65’s near-5,000 pound curb weight does little to hold back the car from rocketing forward with authority. There’s an elegance to the way the S65 delivers power that’s mostly unmatched by everything else on the road. From my experience, only the Bentley Flying Spur, with its ferocious W12, even comes close to mimicking the S65’s graceful performance.

Funny enough, the V8-powered S63 is actually faster in performance testing, but it’s hard to quantify just how different interacting with the two engines is. Where AMG’s sweetheart 4.0-liter V8 barks and snarls on its way up and down the rev range, the V12 offers hardly any drama, even with the go pedal almost touching the floor. In a very un-AMG move, there isn’t a sport exhaust available on the S65, either. I’d almost say the engine is too quiet, but the S65 has a funny way of making you forget about shortcomings like that. The speeds this thing achieves are hilarious, even without Affalterbach’s typical melodies. 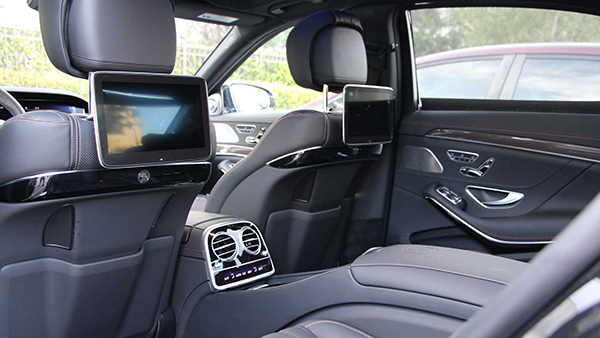 In Comfort mode the S65 exhibits what is easily the least aggressive personality of any AMG product. The suspension is incredibly supple and gives off the impression that the big sedan is gliding over bumps and bruises in the road. Meanwhile, the steering feels relaxed with good weighting, yet requires more input to move the car than something like an AMG GT 4-Door. Mixed with the engine’s calm (but powerful) demeanor, these driving characteristics make the S65 a remarkably good cruiser. 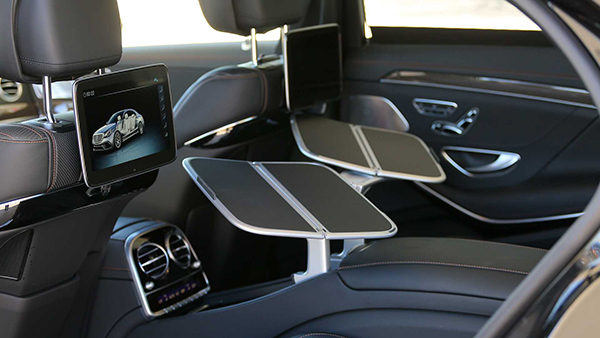 If you’re expecting a big personality change when switching the S65 to its aggressive Sport Splus mode, well that’s just not the case. Yes, the steering and suspension each firm up a bit, which puts the car on its toes ever so slightly, and the gearbox keeps the revs from dipping below 3,000 to stay in the meatiest part of the power band. But the torque on offer is so mighty – even on the floor of the rev range – that the transmission’s heightened state is all but unneeded. That sentiment echoes the S65’s sport modes as a whole. They’re nice to have, but the car’s baseline performance is more than enough, even in Comfort mode.

While future AMG models will somehow manage to be faster, likely with electrified powertrains, there’s a charm to this V12 that newer, more efficient vehicles will struggle to replicate. From both an efficiency and performance standpoint, it’s not great to have an engine the size of a small piano under the hood, but this torquey monster’s temperament makes up for any on-paper losses. 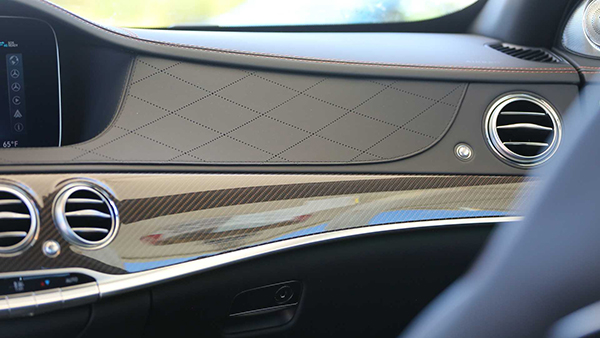 Live In The Moment
Mounting up evidence against this car and its $265,000 price tag isn’t all that hard. Over my few days testing it, I often heard things like “I’d rather have a Bentley,” or “I’d rather have a house.” Although those arguments have merit, they also miss the point. The Final Edition isn’t trying to be better than any of its luxury rivals, it’s just meant to be a celebration. This black and bronze bomber is an all-out fireworks show grand finale for a beloved generation of S-Class that set a new standard for the current Mercedes lineup. Staring at it from across the street or gunning it down a highway, the Final Edition produces smiles like a car of this caliber should.

In just a few months time, we’ll shift our attention to the ninth-generation S-Class, and with it a new chapter for Mercedes-Benz. But before that happens, this was a fantastic final goodbye to the S65, a car that signifies the pinnacle of the company’s current abilities.